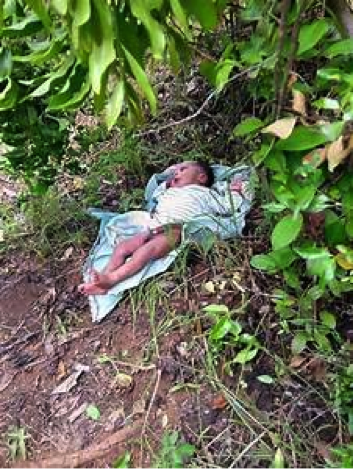 The baby, who is still alive, was discovered in Dumangbe Town by the Town Chief while on his way back to town from a hunting expedition.

According to Chief Kallon, while walking back home about a few meters away from the town, he heard the baby crying in the bush.

Curious to know what was going on in the bush with the crying-baby, he said, he then went directly to the area sound of crying was coming from.

Chief Kallon explained that upon arriving on the scene, he was surprised to see only the baby lying in the bush wrapped in a piece of cloth.

He said several insects were hovering around the baby, something which he said, added to the severity of the baby’s cry.

He narrated that he immediately went to town and shared the information before he and other residents went and rescued the baby, and brought the infant to town.

When they arrived in town, the baby was cleaned and they decided to find out who took the baby to the bush, according to Chief Kallon.

He further narrated that during the community investigation, an elderly woman managed to identify the mother of the child in the same Dumangbe Town.

According to a member of the Child Welfare Committee in Tewor District, Melvin B. Kamara, during interrogation, the baby’s mother first denied being the mother of the child, but when she was taken to a midwife for examination, it was discovered that she had just given birth.

As a result, ladies in the town convinced her to explain why she abandoned the toddler.

It was then that she admitted that she was the one who abandoned the child in the bush, saying her action was due to frustration.

She explained that her first son who is now seven years old was abandoned by his father; and that she has been the only person caring for him, following which she got impregnated again, with no one to help her.

She said instead of killing the child, she decided to take the newborn to the bush so that somebody would find him and take care of him.

However, the 21-year old mother has since expressed regrets for her action and called on all the people of Liberia, especially mothers, to forgive her for the act.

She said her action is shameful and exposed the baby to extreme danger.

The baby has since been transferred to Benda Town, where according to Mr. Melvin B. Kamara of the Child Welfare Committee, health practitioners are taking charge of the abandoned child.

The mother, who is also there to breastfeed the baby, is being monitored and is not allowed to have any other engagement with the child, besides breastfeeding him. This is due to fear of a repeat of her earlier action.

Meanwhile, the action of the 21-year old mother has sparked serious public outcry, with many recommending that serious action be taken against her to serve as deterrence.

Teenage pregnancy is a huge challenge in Grand Cape Mount County, with girls as young as 17 years being put in family-way.

In most cases, these pregnancies are abandoned by their male partners.