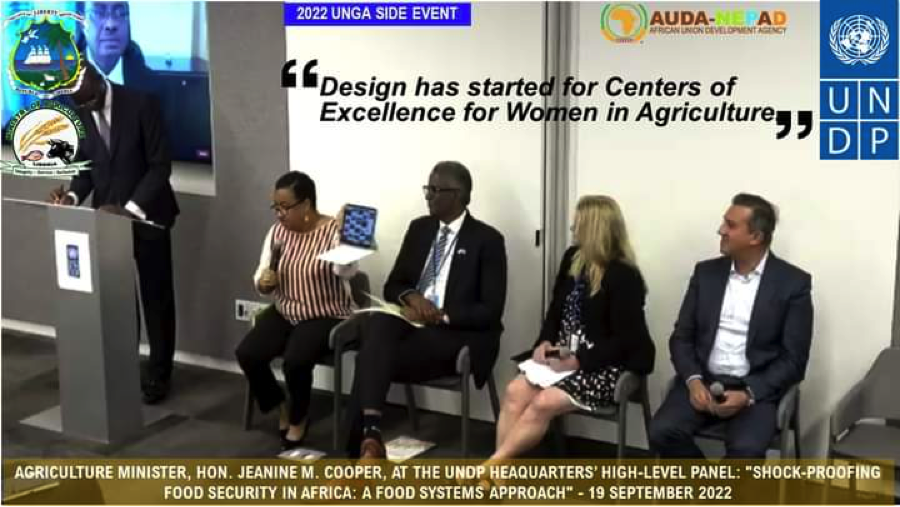 On the sidelines of the United Nations General Assembly (UNGA), Agriculture Minister Jeanine M. Cooper has been making frantic efforts to ensure that Liberia’s case is delivered, intrinsically through food security.

At a UN General Assembly’s side event on Monday, September 19, 2022, on food security across Africa, Minister Cooper underscored the significance of food security in Liberia to avoid the already increasing rate of food insecurity created by several factors.

Minister Cooper explained at the high-level panel on the theme “Shock-Proofing Food Security in Africa: A Food Systems Approach” that Liberia is committed to fighting food insecurity, especially since the national crisis is hurting the state.

The panel looked at the causes and effects of food insecurity in Africa, learned from recent national and regional efforts to improve food security, and came up with concrete steps that could be taken to ensure food security and stop relying too much on food from outside sources.

But the UN thinks that not having enough food can make societies unstable, cause more hunger and malnutrition, lead to migration and war, and cause a lot of damage to the economy.

It has also been shown that the number of people with food insecurity keeps going up, and 2022 is expected to be the worst year on record for food insecurity around the world.

People have thought that higher energy costs, climate change, COVID-19, and wars around the world are all contributing to the food crisis.

Also amongst them is what the UN terms “Russia’s unjustified invasion of Ukraine,” which they believe has made an already bad situation worse by preventing the most vulnerable and the most at-risk from having access to the food they so desperately need.

Also, the World Bank says that the Russian government’s unprovoked invasion of Ukraine could push 40 million more people around the world into extreme poverty and ensure they don’t have enough food this year.

In line with the humanitarian principles of humanity, neutrality, impartiality, and independence, the U.S. is committed to working with the rest of the world, and the U.N. has said it will work to solve the problems that cause people to not have enough food.

The UN General Assembly is an opportunity for the world to come together to address the most pressing global challenges facing us today.

At the 77th session of the United Nations General Assembly (UNGA 77), which is currently going on, the US is expected to show that the President is serious about working with other countries by taking part in a wide range of UNGA events and activities.

The United States sees the United Nations as an important place to work on some of the world’s most important and shared problems, like food security and health crises. This is one of the country’s top policy priorities.

The United States also knows that, at a time when geopolitical tensions are high, we all have a part to play in making sure that the United Nations can do its job and continue to be a central and effective institution for solving problems.

African ministers, high-ranking officials from international organizations, and leading thinkers were among the speakers and panelists at the UN General Assembly’s Side Event on food insecurity in Africa.