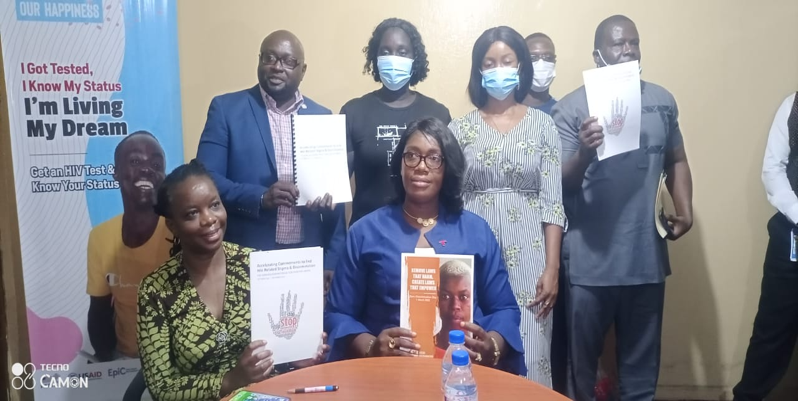 The National AIDS Commission, in collaboration with UNAIDS, has asked national and international partners to pass legislation prohibiting discrimination and repealing laws that discriminate against persons living with HIV/AIDS and other illnesses.

The declaration was made at a ceremony marking Zero Discrimination Day on March 1, 2022, which UNAIDS established in 2013 to promote and celebrate everyone’s rights regardless of age, gender, sexuality, nationality, race, or skin color.

Since 2013, March 1 has been designated as “Zero Discrimination Day,” with the purpose of empowering all people to live in dignity, regardless of their choice, beliefs, profession, education, disability, or disease.

The National AIDS Commission joined the Joint United Nations Program on HIV/AIDS (UNAIDS) in emphasizing the urgent need to take action against discriminatory practices, which is the global subject for this year’s Zero Discrimination Day.

Hon. Lewis Wright, vice chairperson of the National AIDS Commission, spoke on behalf of the commission on Tuesday, March 1, 2022, about the importance of Zero Discrimination Day, “This is critical because discrimination continues to sabotage national efforts to address HIV-related rights and other public health concerns”, stating, “People living with HIV, critical populations, and vulnerable groups have faced prejudice in their search for care and treatment and to live freely in society since the outbreak of HIV in Liberia in 1986.”

He went on to say that discrimination is to blame for a lot of the bad things that have happened in HIV control and management, and that now is the time for all stakeholders to unite their efforts.

“Liberia, as a member of the Global Partnership for Action to Eliminate All Forms of HIV-related Stigma and Prejudice, would have to adopt clear and dedicated efforts to combat discrimination. There is no better moment than now to join worldwide efforts to eliminate AIDS as a public health hazard by 2030”, he said.

As we join the rest of the world in commemorating Zero Discrimination Day today, the commission reiterates its statement from the 2021 World AIDS Day commemoration, that taking action to combat discrimination, and thus adopting the global theme “Remove laws that harm, create laws that empower,” will necessitate policymakers to ensure that, the commissioners revealed.

Meanwhile, Hon. Wright reaffirmed the commission’s commitment, saying that in order to translate commitments into measurable policy change and programmatic interventions that result in the enjoyment of HIV-related rights by all; and in order to achieve Zero Discrimination by 2030, the national AIDS Commission is working on four recommendations, which it is recommending to all stakeholders.

That all existing HIV related discriminatory laws, regulations and policies on our books are repealed.

Persons living with HIV and members of the key population have access to justice and can challenge rights violations.

That no one is denied health services based on perceived or real positive HIV status, sexual orientation or gender identity

According to Hon. Wright, the commission remains committed to achieving the 2030 goals in order to translate commitments into measurable policy change and programmatic interventions that result in everyone enjoying HIV-related rights. This includes revising the goal of scaling up HIV treatment to reach the 95-95-95-level for people living with HIV.

Reduce HIV transmission from mother to kid to less than 2%.

“We are extremely concerned and urge policymakers, notably our legislators, to take steps to abolish legislation that hinder public health interventions, such as Section 14.74 of the Liberian Penal Code.

People with homophobic thinking have long utilized this section of the legislation to justify violence, discrimination, harassment, and uneven treatment for members of the country’s most vulnerable demographic group, those who are disproportionately exposed to HIV and other sexually transmitted infections.

These people live in terror and face constant prejudice because of their sexual orientation or HIV status, whether genuine or perceived.

HIV prevention and control public health promotion is being undermined.”

The deputy commissioner went on to say that those who are infected with HIV and AIDS are often discriminated against when seeking treatment and justice, which has contributed to the rise in HIV infection in our country over time.

Today’s remembrance, we hope, will allow us to reflect on what went wrong and shift our thinking to embrace tolerance and reject prejudice against people based on societal stereotypes. We cannot afford to miss out on the opportunity to eliminate AIDS by 2030 or to fall behind other countries.

The Zero Discrimination Action Plan for Liberia, he said, is a document that aims to accelerate the country’s commitment to ending HIV-related stigma and discrimination in six priority areas: healthcare, justice, individual household and community, education, workplace, and emergency humanitarian situations. He urges everyone to work together to ensure that there is no discrimination.