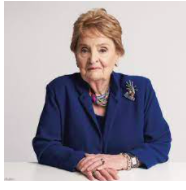 Madeleine Albright, the United States’ first female secretary of state, died at the age of 84. Albright, a long-time international policy expert, became America’s top diplomat in 1997 under the Clinton administration, according to the BBC. Albright was acclaimed as a “champion of democracy” for her role in ending ethnic cleansing in Kosovo. Her family released a statement confirming her death from cancer.

According to the statement, “she was surrounded by family and friends.” “A loving mother, grandmother, sister, aunt, and friend has passed away.”

Former President Bill Clinton and Hillary Clinton, who later became Secretary of State, were among those who paid tribute to her after her death was announced.

Meanwhile, President George Manneh Weah has sent a Condolence Message to his counterpart, the President of the United States of America, His Excellency Mr. Joseph R. Biden, Jr. for the death of Honorable Madeleine K. Albright, who died on Wednesday, March 23, 2022.

The Liberian Leader noted that the former Secretary Albright would be remembered as one of the free world’s astute diplomats, and a passionate force and champion for freedom, the human rights, liberal democracy and peace across the globe.

President Weah indicated that it is his fervent prayer and hope President Biden and the resilient People of the United States of America will find comfort and strength during this period of national morning.