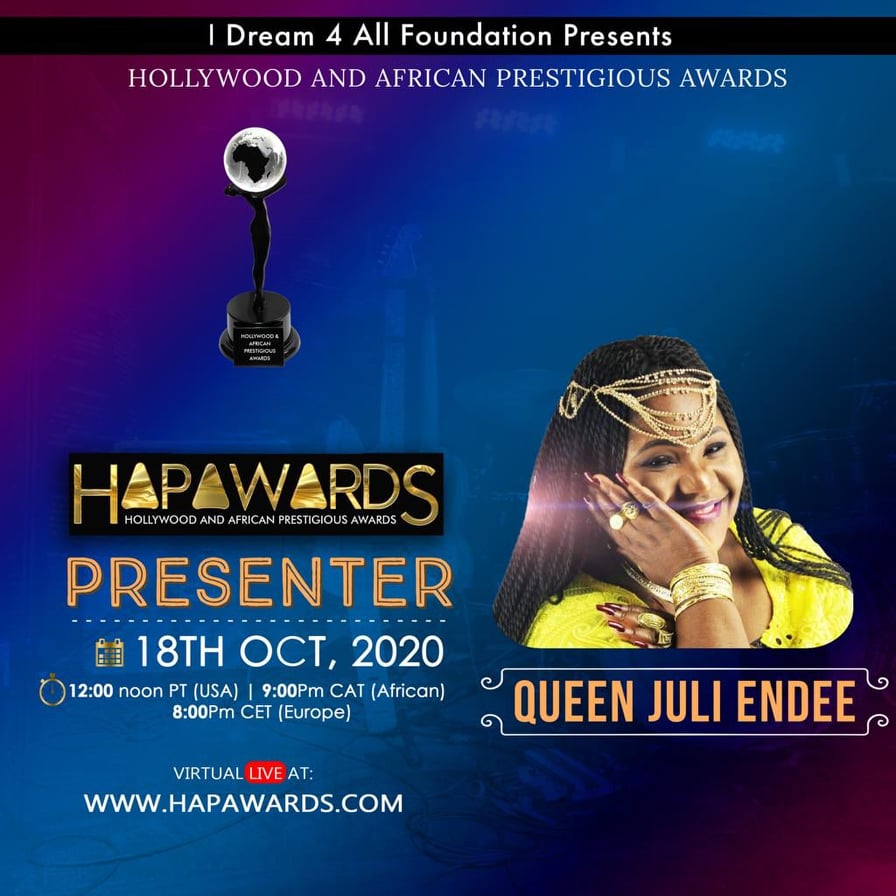 Culture Ambassador and Traditional Queen, Ambassador Juli Endee will on Sunday, October 18, 2020 served as a presenter of the 4th Edition of the 2020 Hollywood-African Prestigious Awards virtual show. Ambassador Endee is the 2018/2019 recipient of one of the United States of America’s most prestigious award, this award recognizes remarkable and outstanding individuals who achieved extra-ordinary milestones during the year under review.

It has also been reported that little Semah Weefur, a Liberian Gospel Musician is another Liberian who has received the Hollywood-African Prestigious award in 2018. The Hollywood & African prestigious Awards are United States of America (USA) awards given to outstanding individuals who lives have been marked by extra-ordinary milestone and accomplishments on the African continent.

In 2017 the HAPA awards was endorsed by the Mayor of Glendale-Vartan Gharpetian, California Legislature Assembly and the United StatesCongress as one of Hollywood’s Major awards show and establishment.Over the years the HAPA awards has honored Royalties like HIS Imperial Majesty the Oni of Life, HIS Majesty King of Eswatini, former WBAheavy weight Champion, Honorable Gerrie Coetzee, Reverend Mother Abimbola Ajayi and Todd Bridge along with other selected politicians, dignitaries, Hollywood & African Awards list Actors, Musicians, Comedians, activists among others.

Meanwhile, this year’s HAPA awards will for the first time be done virtually due to the effect of the Coronavirus or Covid-19 pandemic that has restricted travels and other activities across the globe. The official kickoff of the 2020 Virtual Hollywood and African Prestigious Awards (Hapawards) commerce on Saturday October 17, 2020 with the Hapawards Zoom Business Roundtable Conference. While the award event itself will be scream live on various Communication channels and social media platforms, with maximum publicity a released said.

Did Josephine Squeeze Her Husband’s Seed to Death?