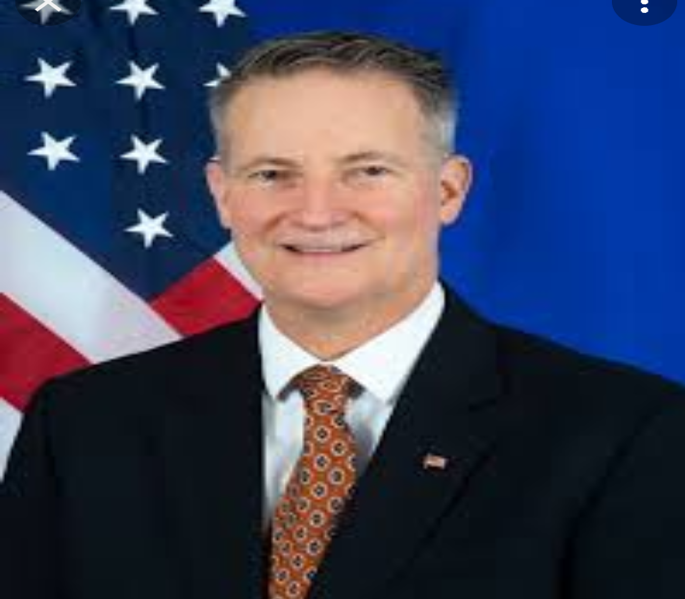 Michael A. McCarthy, the United States Ambassador to Liberia, has expressed deep disappointment and issued what observers describe as the final warning shot for President Weah’s administration to put in place a proper anti-corruption mechanism or face dire consequences that could jeopardize the administration’s bid for re-election.

Despite many contributions from the United States to support the government’s efforts, Ambassador McCarthy claims that officials in Liberia continue to misuse public funds for personal gain.

Using the health sector as an example, the US envoy stated that despite his government’s annual contribution of over $79 million to the sector, clinics and hospitals, particularly in remote areas, lack crucial pharmaceuticals due to corruption.

“Approximately $9 million is specifically for purchasing medications and commodities for the Liberian people and improving the Ministry of Health’s effective distribution and warehousing of pharmaceuticals. Despite this extra support, we learn regularly about places like Kolahun in Lofa County and Sanniquellie in Nimba County, where clinics and hospitals must make do without even the most basic drugs,” he said.

The Embassy said the findings of its investigation are troubling: “Troublingly, Embassy investigations indicate that not only are some citizens diverting public medical resources and low-cost drugs for personal gain, but that babies, young children, and birthing mothers are dying needlessly as a result”.

In reference to statements made by Dana Banks, Special Assistant to the President of the United States, who stated: Corruption erodes the democracy you worked so hard to establish. However, only the Liberian government and the Liberian people have the power to combat corruption, fight for accountability and openness, and bring the country forward. Ambassador McCarthy stated that the United States is concerned enough about corruption in Liberia to sanction individuals.

“As these statements indicate, the U.S. Government is sufficiently concerned about corruption in Liberia to sanction individuals. Corruption leads to citizen frustration and has had destabilizing effects on countries in the region. It poses significant risks to peace and democracy”.

The US envoy took advantage of the opportunity to attract public officials’ attention to Resolution 907, which was introduced in the US House of Representatives on February 4 this year and encourages Liberia to redouble its efforts to combat corruption and advance human rights concerns. Liberia is also urged to pursue essential economic reforms in order to achieve long-term economic growth and human capital development.

The resolution also calls on the US Treasury and State Departments to continue to impose targeted sanctions against those who undermine the rule of law and people’s trust in Liberia through corruption, gross human rights violations, and other acts that endanger the country’s peace and security, he said.

On March 14, 2022, the US Embassy made these words in honor of Liberia’s first President, Joseph Jenkins Roberts, who was born 213 years ago.

According to the statement, sixty years after the arrival of the US Agency for International Development (USAID) in Liberia, 19 years after the end of the civil war crisis, and seven years after the eradication of Ebola, US taxpayers contribute over $110 million per year in foreign assistance to the country.

Expressing concern in an apparent dissatisfaction, the Ambassador said: “How would Liberia’s first statesman feel to know that his country’s top ally was compelled to sanction members of Liberia’s government just to preserve rule of law and the democracy he helped establish”?

The US envoy frowned at Monrovia’s squalor, claiming that as a Peace Corps volunteer in West African villages (without power or running water), residents were well-coordinated in keeping their villages clean. Each household would sweep inside and outside and dispose of debris first thing every morning, he said, taking advantage of the cool, early morning light. Villagers then worked with the local government to deliver rubbish to a designated dump on a daily basis, he claimed.

He claims, however, that the state of cleanliness in Monrovia, which is more developed and has a much wealthier population, does not compare.

The Ambassador said he was surprised at the words of city leadership on Monrovia Day when a senior official lamented that unlike his previous three years in office, “no donor or external partner is funding the recurrent cost of solid waste collection and disposal,” implying that he was abandoned by the international community.

“Is there a more basic local government responsibility than the collection and proper disposal of garbage? Would Liberia’s first president have imagined that, 175 years after independence, foreigners should be held responsible for the removal of garbage in his capital city?”

Also speaking about legislative transparency, Ambassador Michael A. McCarthy said on February 25, they learned that a Rhode Island State Representative, Nathan W. Biah, Sr., is donating electronic voting equipment to the Liberian House, informing that this is not the first of such equipment donated to help make Liberia’s top legislative body more transparent to its citizens.

“I have been reliably informed that a previous e-voting system was installed in 2014 by the U.S. taxpayer-funded National Democratic Institute (NDI), but it was never used,” he said.

Holding President Weah to his words, McCarthy indicated that President Weah said during his December 10 Summit for Democracy speech (https://www.state.gov/official-interventions-the-summit-for-democracy/): “Over the next year, we intend to introduce legislative transparency by making all votes public so that constituents can hold their lawmakers accountable for their actions, which is a fundamental element of any healthy democracy.” He expressed hope that the legislature embraces this latest opportunity to increase citizen awareness of the actions of their elected officials.

“Would J.J. Roberts have believed that in modern Liberia, a constitutional republic where “all power is inherent in its people,” legislators would purposely neglect to use a tool created to educate citizens on how their democratically elected representatives vote?”

In comparison, the U.S Ambassador said the United States of America has, no doubt, also failed to live up to some of the aspirations of our first president, but said he believes George Washington would be pleased to know that the country he fought to establish would today be working to support democracy and fight corruption both at home and in places like Liberia.