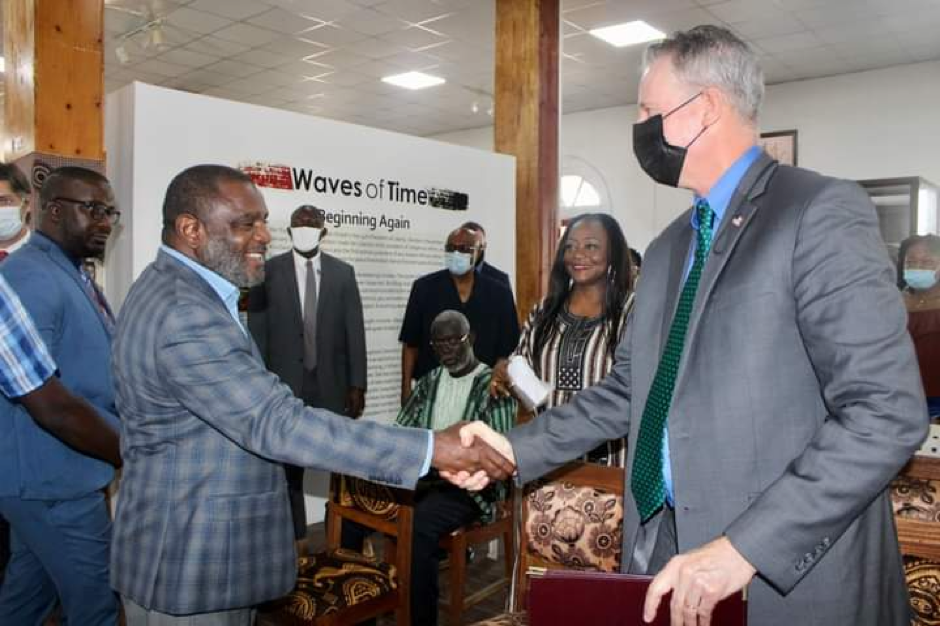 On behalf of the United States government, U.S. Ambassador Michael McCarthy donated 20 historical pictures to the National Museum of Liberia on March 17, 2022. Dr. John C. Yoder, a political scientist and historian at Whitworth University in Spokane, Washington, USA, donated the photographs to the museum, which were taken by Charles Allmon, one of the early photo editors of National Geographic who also worked as a supervisor for the Firestone Plantation in the 1940s.

During the 1940s, the Liberian government, Firestone, and the US Armed Soldiers partnered to develop sections of Liberia’s infrastructure in order to increase rubber production, support Allied forces during WWII, and attract outside mining and forestry interests.

This effort was consistent with President Tubman’s Open-Door Policy, Firestone’s business interests, and American strategic concerns in filling the demand for rubber necessitated by the war.

Presenting the photographs, Ambassador McCarthy said, “Both the United States and Liberia have rich pasts, including diverse communities, cultures, and traditions, many of which reach back thousands of years before the founding of our modern nations.”

“Importantly, this donation would not have been possible without the help of Dr. John C. Yoder. Dr. Yoder, in 2019, taught and lectured at Cuttington University’s Joseph S. Gaunnu Institute of Peace and Conflict Resolution in Liberia as a Fulbright Specialist—a scholar exchange program sponsored by the U.S. Department of State. It was Dr. Yoder who met Charles Allmon and received his photographic collection in 2010. The original photographs are housed at the University of Indiana as part of its extensive collection of Liberian materials,” Ambassador McCarthy said.

He emphasized the importance of national museums, which are natural centerpieces of the country’s tourism strategy and can be strong draws for domestic and international tourists.

According to Ambassador McCarthy, “the United States hopes to continue supporting Liberian efforts to preserve their national history and culture, working in partnership with the government and other stakeholders. The Ambassador’s Fund for Cultural Presentation, a merit-based grant competition administered by the State Department, is our primary vehicle for such activity. We currently have a project focused on preserving and protecting Providence Island”.

Representing the government of Liberia at the donation ceremony were Minister of Information Ledgerhood Rennie, Assistant Minister for Culture Margret Cooper-Frank, Acting Director of the National Museum Kollie Kennedy, Boakai Fofana, the Deputy Minister for Technical Services, and Judah Sanoe, the Assistant Minister for Administration. Don Darden, the General Manager, was also present.

He expressed “deep gratitude” to the American government for the presentation, which he said coincided with the country’s bicentennial commemoration.

In his conclusion, the Minister emphasized that “Friendships that are excellent are friendships that are good. They do have their differences at times. Liberia and the United States, on the other hand, have a solid relationship.”

Both the United States and Liberia have a rich history, with varied populations, cultures, and traditions dating back thousands of years before our current nations were founded.

Charles Allmon (1921 – 2015) was born in East Liverpool, Ohio, USA. He graduated from Purdue University in Indiana in 1941, where he studied engineering and was captain of the wrestling team. During World War II, he worked for the United Fruit Company on a banana plantation in Honduras, Central America. Because of his experience with tropical agriculture, he was hired by the Firestone Natural Rubber Company in Liberia in 1943. Allmon’s first assignment at Firestone was to oversee the construction of housing needed for the influx of new workers hired for the rapidly expanding Firestone operation. He then became supervisor of as many as 700 rubber tappers at the plantation.

As a college graduation gift, Allmon’s parents gave him a camera capable of taking color slides. While working in Liberia from 1943 until 1945 and on another trip in 1946, he took scores of color photographs of life and work at Firestone, Robertsfield, Kakata, and Monrovia. Upon return to the United States, Allmon showed his photos to the editors at National Geographic Magazine, a publication famous for its high-quality photographs of nature, people, and exotic locations around the world. National Geographic purchased several of Allmon’s pictures for a 1947 article on Liberia. That publication launched Allmon’s distinguished career as a freelance photographer and later as an illustrations editor at National Geographic Magazine. During the 1970s, Allmon changed careers and became a very successful financial adviser and investment manager. He passed away in 2015.

The photographs in this collection were generously donated to the National Museum of Liberia by Dr. John C. Yoder, a political scientist and historian at Whitworth University in Spokane, Washington, USA. At Whitworth, Yoder offers courses on Africa, peace studies, and political philosophy. He also has taught African history at the University of Liberia and Cuttington University (1987 – 88) and political science and conflict resolution at Daystar University in Kenya (1998). During October 2019, Yoder taught and lectured at Cuttington’s Joseph S. Gaunnu Institute of Peace and Conflict Resolution in Liberia as a Fulbright Specialist — a scholar exchange program sponsored by the U.S. Department of State.

Dr. Yoder met Charles Allmon in 2010 at a graduation party for a Whitworth University student, Gillian Goodrich. Gillian was Allmon’s granddaughter and Yoder’s student. At the party, Yoder learned that Allmon had lived and worked in Liberia. After talking about his Firestone days and his career as a photographer, Allmon invited Yoder to visit him in his Washington D.C. home to see the original collection of Liberia photos. During that visit, later in 2010, Allmon described each of the photographs in detail and

then donated the entire collection to Yoder, who subsequently had them digitalized and printed. The original glass-covered color slides are housed at the University of Indiana as part of its extensive collection of Liberian materials. Dr. Yoder is pleased to contribute these photographs to Liberia’s photographic archive. The donation of photographs to the National Museum of Liberia was facilitated by the U.S. Embassy in Monrovia.