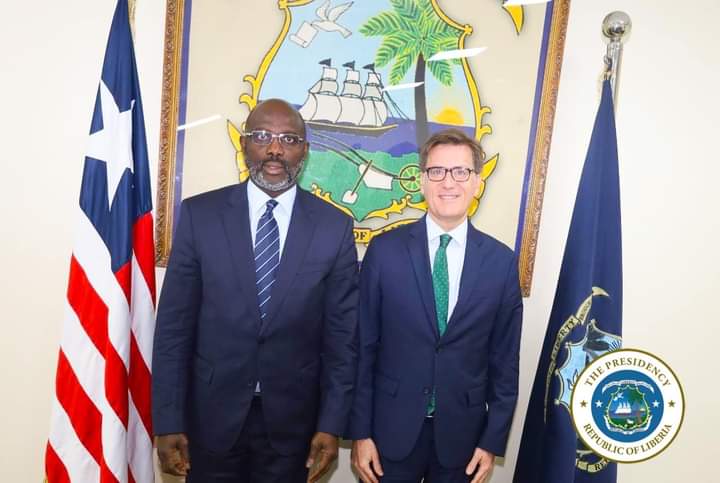 Letters of Credence have been presented to His Excellency Dr. George Manneh Weah, President of the Republic of Liberia, by the Ambassadors of the Kingdom of Spain and the Republic of Slovakia, respectively, in Monrovia, Liberia.

“On behalf of the government and people of Liberia, and in my name, I would like to welcome you to Liberia and congratulate you on your appointment as Ambassador Extraordinary and Plenipotentiary of the Kingdom of Spain to Liberia,” said the Chief Executive of Liberia.

He remembered that Liberia’s links with Spain went all the way back to 1847, which was the year that Spain formally acknowledged Liberia’s independence. He also discussed the visit that former President William V.S. Tubman made to Spain in the year 1952. He stated the tour was the catalyst for the establishment of diplomatic connections on the level of an ambassador between the two countries in 1954.

The President of Liberia, George Weah, expressed his contentment with Spain’s decision to place Liberia at the head of its list of objectives for cooperation between Spain and Africa. In addition to this, he stated that Liberia was looking forward to deepening its connections with Spain “during these difficult times.”

In his answer, the new Spanish envoy conveyed gratitude to the Liberian head of state for the warm welcome and the pleasant words that were spoken.

Mr. Rafael Soriano Ortiz expressed his gratitude for Spain’s appointment to the position of Ambassador to Liberia and promised to put in a lot of effort to improve the bilateral ties and collaboration between Spain and Liberia. He said he was honored to have been given this position.

He stated that Spain and Liberia had been friends since since Liberia was established and that “during these many years, we have both profited from our mutually respectful and friendly ties.” (These many years)

He claimed that the two nations had not even come close to realizing the full potential of their relations and stated his hope that the gap would be overcome while he was serving in his current capacity.

He extended a warm welcome and heartfelt congratulations to the newly appointed Slovak Envoy before informing him that the Liberian government was enthusiastic about the possibility of agricultural collaboration with the Slovak Republic.

In a similar vein, Ambassador Felix discussed how significant relations between Liberia and Slovakia began to develop in 1993, the same year that his country became independence.

According to Ambassador Felix, “The new era began when Liberia recognized Slovakia and our diplomatic relations began on October 6, 1998.” This was indicated by the ambassador. In addition to this, he stated, “We can say they are amicable with one another and operate well together, particularly on the multilateral level.”

The Slovakian envoy, who is based in Abuja, Nigeria, expressed his confidence that the two nations could increase their level of commerce by building on what they had already accomplished.