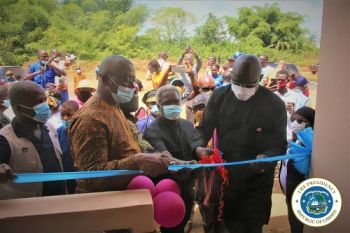 The people of the Southeastern county of Grand Gedeh on Friday, February 19, 2021, came out in their numbers to give President George Manneh Weah and entourage an heroic welcome unseen in years, according to the Executive Mansion.

From Toe Town, the first major town from Nimba County, to Zleh, Ziah Towns, Tuzon and Zwedru, hundreds of thousands of Grand Gedeans lined major corridors to welcome the President into the county.

Earlier at the boundary with Nimba County, the President was received by chiefs, elders and other officials of the county.

Few minutes’ drive away from the boundary, the President hit the ground running, dedicating several projects including the housing units constructed by his government to remove citizens from dilapidated structures in Kpelle Village.

The President, later at a Town Hall Meeting in Toe Town, thanked the people of Grand Gedeh for the heartfelt and tumultuous reception accorded him, noting “I am not surprised to receive such gigantic welcome.”

“I am your son, and this is my county,” overwhelmed by the reception Dr. Weah said.

Commenting on several issues of national importance, the Liberian Leader lauded the people of the county for maintaining peace and security since the departure of the United Nations Mission in Liberia (UNMIL) few years ago.

He reminded the people of the county of the importance of keeping and maintaining the peace of the country, without which he said development is unrealizable.

On the issue of the presence of Burkinabes in Liberia, President Weah urged citizens of Grand Gedeh to work with citizens from other countries, stating that Liberia respects international protocols.

He said the ECOWAS protocols which Liberia accedes to allow for free movement of citizens from one country to another.

Relative to support for farmers and other business people, the President said the government of Liberia in collaboration with partners has put aside millions of United States Dollars to support Liberia’s farmers and businesses.

President Weah also announced plans to work with the national legislature to place loan scheme program for local farmers in the national budget.

Shortly upon touching the soil of Grand Gedeh, President Weah broke ground for 160 bedroom referral hospital in Grand Gedeh funded by the governments of Liberia and Germany through the German Development Bank (KFW) and Implemented by Welthungergilfe (WHH) Liberia.

The $15.5 million dollars project is in support of the government’s development agenda, the PAPD. It is expected to benefit around 160,000 persons, and construction works will last for the duration of 48 months occupying an area of 8,513.84 square meters.

Making remarks at the groundbreaking ceremony Saturday, President Weah thanked the German government through its Ambassador, saying that the project is an outcome of the peace existing in the county.

“We appreciate the partnership between us. It’s an outcome of the peace you have maintained here. Hope you will work tirelessly for the project to be completed,” the President said.

In a related development, President Weah dedicated the 7th Judicial Circuit Court Complex on the outskirts of Zwedru.

The Court Complex project began under the former administration and completed in 2018, the year he assumed power.

Grand Gedeh County is the third stop of the first leg of the President’s six-county tour, which has already taken place in Bong and Nimba Counties. The rest include River Gee, Maryland and Grand Kru.