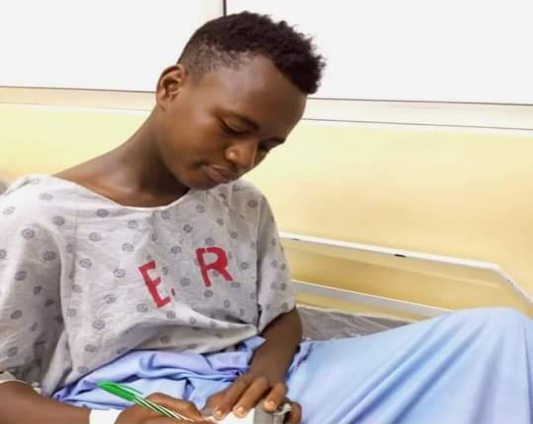 The Liberia National Police (LNP) has arrested and detained Henry Giddings, commonly known as T-boy, for alleged malicious destruction of properties he committed at the Harbel Supermarket in Paynesville, outside Monrovia. He is currently being detained at the Zone 8 Police Depot on the Robertsfield Highway.

Henry Giddings is the teenager whose tongue was bitten off in February by one Darius Sayon, who is said to have been released from Monrovia Central Prison.

According to Giddings’ mother, Angeline Peabody, her son was reported at the Depot on Saturday evening based on a complaint filed by the management of Harbel Supermarket at the ELWA Junction. Angeline stated that her son was allegedly seen destroying goods, such as a glass door and wine bottles, shortly after entering the supermarket, which I believed as a buyer.

“I received a call that T-boy got over on his motorcycle from Barnesville to Paynesville, where he was arrested by the police for destroying people’s things at the Harbel supermarket at the ELWA Junction.”

According to the information, before heading to the supermarket, T-boy also complained to his mother for beating on minors in his community indiscriminately, an allegation the mother denied.

His mother said that if urgent interventions are not made now, the police are threatening to send her son immediately to the Monrovia Central Prison today, June 13, 2022.

Madam Peabody said since the incident, she has been to several prayer houses seeking divine intervention on behalf of her son but to no avail. She said she had concluded to take T-boy to a rehabilitation on the depot road as advised by a friend.

Madam Peabody said she and her son have been going through HELL since the incident, while suspect Darius Sayon is peacefully living life elsewhere without a final verdict in the case.

“When I went to the court, they asked me to find another lawyer and I don’t have money to take new lawyer, I will leave my own with God,” Madam Peabody said to Womenvoices.

T-boy lost his father in last December, leaving his young mother as a widow who is currently struggling as any ordinary single mother to cater to T-boy and his siblings.  The mother said, she’s no longer pleading for JUSTICE for her son, but for INTERVENTIONS into the current case with the Lebanese first, and then later SEEK FOREIGN ADVANCED MEDICAL TREATMENT that could save her son from everlasting insanity which he faces now to a normal person.