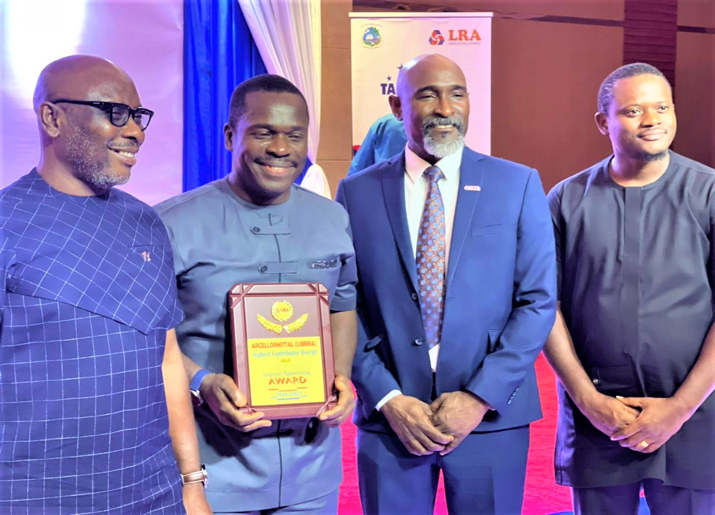 December 11, 2022 (Monrovia, Liberia) The private sector leader ArcelorMittal Liberia has, for the third consecutive year, been presented the Gold Award and named the highest taxpayer of the year 2021-2022 by the Liberia Revenue Authority (LRA).

Commissioner General Doe-Nah praised ArcelorMittal Liberia for the way it has helped Liberia’s economy, and he said that he hoped other businesses would follow suit by paying their taxes.

Receiving the award on behalf of the CEO and management of ArcelorMittal Liberia, the company’s Head of Government and Community Relations, Marcus Wleh, thanked the LRA for the annual taxpayers’ appreciation event to recognize businesses and individuals who are contributing to the development of their country by paying their taxes.

“The private sector is the engine of growth.” “We are happy that ArcelorMittal Liberia is being honored, which is a further manifestation of how, as a company, our future is intertwined with Liberia’s future…something that is very important.”

Wleh praised the enabling business environment that has been created, making it possible for ArcelorMittal to operate freely and contribute meaningfully to the government’s revenue generation.

Last year and the year before, ArcelorMittal Liberia was also recognized as the highest contributor in taxes to the Government of Liberia, and since it began operations in Liberia, the company has remained on the list of top taxpayers.

Since 2005, ArcelorMittal Liberia has given more than USD $317 million to the government in the form of taxes, royalties, and other payments.

In addition to its financial contribution, ArcelorMittal Liberia is one of the country’s largest employers and provides several other critical services to Liberians in the areas of healthcare, education, training, and development.

Last year, ArcelorMittal Liberia officially recommenced its Phase Two expansion project, halted by the 2014 Ebola outbreak, with the signing of the third amended Mineral Development Agreement (MDA) with the Government of Liberia.

The expansion project, which encompasses processing, rail, and port facilities, will be one of the largest mining projects in West Africa, with a capital of over USD $1bn, and include the construction of a new concentration plant and the substantial expansion of mining operations, ramping up to 15 million metric tons per annum (mtpa). Under the agreement, the ArcelorMittal Liberia company has a reservation for expansion for at least up to 30 m.t.

Up to 3000 new jobs are being created during the construction phase of the concentrator, with Liberians filling most of the roles created.

As the largest foreign investor in Liberia, ArcelorMittal Liberia has invested over $1.7 billion in the country over the past 15 years.