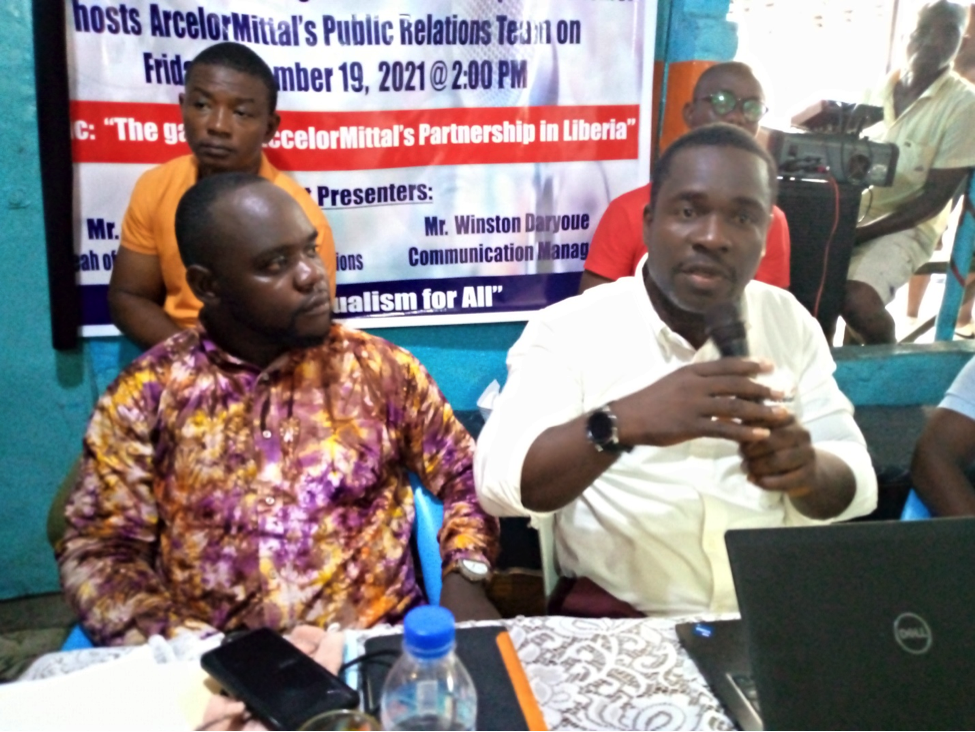 The Management of ArcelorMittal Liberia Limited through its Public Relations Team, has said the company has made more investments in stakeholder relations since its establishment in Liberia in 2005.

ArcelorMittal Liberia Head of Communication and Community Relations, Mr. Marcus Wleh said the arrival of the company after Liberia’s war in 2003 was for exposure and to send a message to the world that the country was saved and opened for business.

As part of ArcelorMittal’s outreach, Mr. Wleh made the statement Friday, 19 November, when the Communication Team of ArcelorMittal Liberia was hosted by the Center for the Exchange of Intellectual Opinions (CEIO) on Carey Street in central Monrovia, under the Topic: “The Gains of  ArcelorMittal’s Partnership in Liberia.”

When asked about the economic impact of ArcelorMittal investments in Liberia, Wleh said “Since 2005, the steel giant has been paying US$35m annually as tax revenue to the Government of Liberia (GoL), the new investment, he noted, will put ArcelorMittal tax revenue at US$75m.”

He added that the company has made over US$300m direct payment to the GoL, saying, “In terms of jobs we have provided over 3,000 real paying jobs.”

The ArcelorMittal Liberia Head of Communication and Community Relations told the audience at CEIO that there are several businesses in Liberia which actually took hold of the presence of the company and made tremendous progress especially in Grand Bassa and Nimba Counties, where he said the world steel giant has provided capacity building training for business people.

Talking about additional benefits, he pointed out that just after the war particularly when ArcelorMittal replaced LIMCO, most of the people trained by LIMCO went away during the war and so it took ArcelorMittal time to train expertise which at that time triggered the need for foreign brains in the employ of the company.

But now, he said, that has gone down, adding that there are trained, qualified and competent Liberians who are serving in different capacities at ArcelorMittal.

“Now, when you look at the over 3,000 employees at ArcelorMittal, about 67% of the senior management are Liberians. There are nine persons that we have, three expatriates and six Liberians. That means that Liberians are playing major roles in ensuring that the benefits that supposed to come to the country in terms of human resources development happens.

“We provide advanced scholarships, the government in its wisdom signed an agreement with ArcelorMittal to train Liberians that will take over these jobs that foreigners are doing in a couple of years, we agreed to that. So the government says every year make sure you provide US$200, 000 worth of scholarships in areas that are critical to the mining sector and to the development of Liberia. We have sent people to India, Uganda, Kenya, and amongst other countries,” said Wreh, while indicating that the first Agriculture Minister in the ruling CDC government, Mogana S. Flomo is a beneficiary of the ArcelorMittal scholarship drive.

He said for the use of the fund, ArcelorMittal collaborates with the Liberian government and communities in the concession areas for direct investment purpose by implementing projects.

To date, he averred that ArcelorMittal has spent up to US$ 47m for direct development in Nimba, Grand Bassa and Bong Counties.

Wleh, who took his time to explain to the audience at the intellectual center, further said in addition to what ArcelorMittal was providing, the company took interest in road connectivity for which it has provided US$40m to pave the road from Ganta City to Yekepa, Nimba County which he said will be completed in 2022.

Also, for corporate responsibility, he accentuated that, “ArcelorMittal has provided over US$2m in various activities. Just today, we announced our sponsorship for the National County Meet.  We provided US$120,000. We support the successful holding of the County Meet. Above that, every year we support our counties to help them prepare.”

Wleh added that “Just last week, we announced over US$400,000 worth of different initiatives; Christmas package for communities in concession territory with focus on putting street lights in Yekepa Township, renovating the hospital in Sanniquellie, amongst other things.

Besides, the Communication Team said ArcelorMittal is in full compliance with the Mineral Development Agreement (MDA).

It can be recalled that on October 19, 2021, the steel company summited to the Government of Liberia through the National Bureau of Concessions (NBC), its self-comprehensive compliance report which the company said catalogued compliance since its arrival in Liberia.