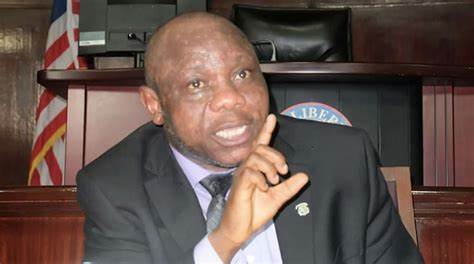 TheNational Authorizing Office (NAO) of the Ministry of Finance and Development Planning in partnership with the European Union will hand over four double cabin pick-up vehicles and three Weight-in-Motion Scales to the authorities at the Ministry of Transport (MOT), for use by the Axle Load Control Unit at the Ministry.

The four pick-up vehicles and the three Weight-in-Motion Scales are intended to help enhance the implementation of Liberia’s Axle Load Law and to raise awareness of the negative impact of overloading trucks under the “Axle Load Control Project.”

The Axle Load Control Unit at the MOT is expected to use the equipment to carry out regional and country-specific guidance, and capacity-building activities.

The Axle Load Control Project is supported by the European Union (EU) within the framework of the programme “Support for governance in West Africa’s transport sector ROC/FED/039-218.” This project demonstrates how the EU and Liberia are working together in financing road investments, protecting road transport, for improvement of trade and businesses that will lead to the enhancement of socioeconomic conditions in Liberia.

This demand-driven initiative aims at supporting the implementation of Axle Load Control for the creation of a harmonised, integrated and sustainable transport network in Liberia and in its neighbouring West African countries. The intervention provides technical assistance to Liberia based on work plans developed annually, in close cooperation with the other ECOWAS countries and their National Coordinators.

Samuel D. Tweah, Minister of Finance and Development Planning, in his capacity as National Authorizing Officer and the European Union Delegation to Liberia led by the Head of Delegation, Ambassador Laurent Delahousse, will participate in the program marking the official handing over of the equipment to the MOT. Also representatives of GIZ International Services of Germany, which is charged to provide technical assistance for the implementation of Axle Load Control in Liberia, are expected to be in attendance together with the authorities of the Ministry of Transport and members of the Steering Committee for Axle Load Control at the Ministry of Public Works and at the Liberia National Police. The National Authorizing Officer, Samuel D. Tweah, Minister of Finance and Development Planning indicated that, “The acquisition of the equipment will contribute to the development of a politically and economically realistic regional strategy for improving the sectorial governance of road transport, common to ECOWAS and to the West African Economic and Monitoring Union, as well as promote the harmonisation and synchronisation of national policies”.

Minister Tweah stressed that, “the Axel Load Project will contribute towards the sustainability of road investments by putting a stop to overloading and improving the governance of road maintenance thereby reducing the rate at which the regional corridors deteriorate”.

The Head of the EU Delegation, Ambassador Delahousse says,“The European Union is contributing to this project to safer and more sustainable road transport in western Africa, helping economic activity and job creation. The objective of the equipment handover ceremony is to ensure that project information is communicated to all project partners, stakeholders and target groups accurately, transparently and in due time, and to render visible collaboration between the EU and Liberia.

The visibility of EU funding for Liberia under the European Development Fund and the project activities of the Axle Load Control Unit will reach out to the target groups using perceptible, clear, easy to understand and visually attractive communication. ”

Deputy Minister of Transport, Darious Kollie says, “The purchasing of the four double-cabin pickup vehicles and three weight-in-motion scales will enhance the usage of axle load control of heavy vehicles with the aim to collect data on current loading habits on the regional asphalt roads. Ministry of Transport, supported by GIZ technical assistance, commits to train mobile patrol brigades to enforce the Axle Load Control Law (ALC) while simultaneously developing an ALC Unit within its organizational structure.”