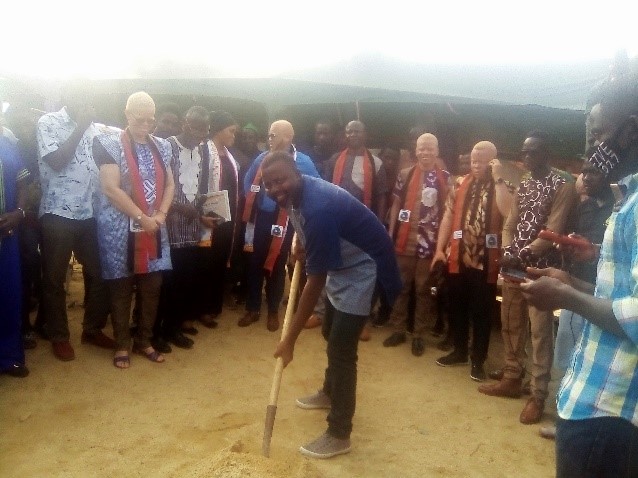 ……As President Weah Assures Construction of Its National Headquarter

President George Weah has promised the Liberia Albino Society of his commitment to construct the society’s first National Headquarters in Monrovia.

Speaking over  the weekend during  the official ground breaking ceremony for  the construction of the headquarter, in Logan Town, District #15 Montserrado County , the Director  for Community Service Department of Budget  at the Finance and Development Panning  Ministry, Saye Cole,  said  the Liberian Government  has allocated   US$40,000 in  the 2019/2020 National Budget  to begin  the construction of the Liberian Albino Society National Headquarter.

He said   the US$40,000 is the initial amount for the building project which is one of President Weah’s heartbeats for the people of the Liberia.

Mr. Cole urged the leadership to ensure that the first phase   of the project is implemented with transparency and accountability.

According to him, what will speed up the project is for the leadership to focus on accountability. He stressed   that  with such commitment,  the Government,  through President  George Weah will ensure  that every Liberian regardless  of   his or her  status  benefits  from  the developmental drive of  the Government.

“The Pro Poor Agenda For Prosperity and Development (APDP)  first pillow  says give power to the people , the masses , the president meant  to empower  the poor people,  to make  them productive citizens,” he noted.

Mr. Cole said with the headquarters for the Liberia Albino Society will include clinic, school, and offices with a hall.

Delivering a special statement at the event, the Executive Director of Liberia Albino Society, Patricia Logan, extolled President George Weah for his quest to improve the living condition of members of the Albino Society.

She said the Liberian Government purchased the land on which the headquarters will be constructed for US$28,000.

She said the Government’s support to the Albino Society worth commendation.

During the event the leadership of the society honored several individuals including Journalist Eva Flomo; Assistant Gender Minister for Administration, Mamensie Kaba; and Pastor Moses Swaray among others.