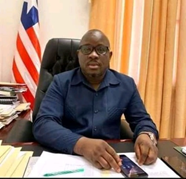 A clash resulting to a war of words has ensued between Bong County Superintendent Esther Walker and Bong County electoral district #3 lawmaker in the House of Representatives, Rep Melvin Josiah Cole.

Superintendent Walker has disclosed that Rep Cole is angry with her, over what she claims the lawmaker deems as her failure to have consulted him before carrying out the distribution of some 1,000 bags of rice provided by President George Weah to citizens of Bong Country as part of the Liberian leader’s county tour citizens’ interaction preparation package.

Superintendent Walker told a local radio station Tuesday that upon receiving the rice, she constituted a committee with the responsibility to equitably distribute the rice to every sector across the county.

She said the rice distribution committee achieved its objective by ensuring that Bong citizens got their fair share of the presidential rice in line with the mandate given her.

Walker said following the rice distribution by the committee, the lone ruling party Bong lawmaker Rep Cole got irritated, according to her, because the lawmaker said why she did not turn over the rice to him to conduct the distribution instead.

“My legislator from my party has rejected me completely, everything I do is wrong, when the President was coming, you know when you win as a ruling party, you need to encourage other people to join your party. So you build that friendship so that other people can come over to you. I have been trying and the President told me that he was coming for the county tour so he sent us one thousand bags of rice so I decided to set [up] a committee so that the rice could go across the county and the lawmaker got vex how I distributed the rice and [how] I did not give it to him.” she claims.

Superintendent Walker said she instead informed the CDC Cole that the rice was not for the party but for the county, adding that as a result of this, Rep Cole allegedly seized the sum of L$1 million given by President George Weah for the people of Bong during the Liberian president’s citizens’ engagement on his tour of Bong County.

The Bong Superintendent alleged that Rep Cole said he would not give a dime out of the L$1 million the Superintendent’s office, adding that since then, she has decided not to confront the district #3 lawmaker on the matter.

The Bong County Superintendent also alleged that Rep Cole took misleading information to the Plenary of the House of Representatives regarding the ArcelorMittal’s social development funds.

“We were summoned at  the National Legislature with a misleading information – we had a meeting, the three counties, the minutes  from  the meeting I sent it  to  the  lawmaker of district #1 of Bong, because the Project Implementing Committee (PMC) the budget law says any funding  for project  the PMC should take 15%  for operation to sponsor their movement and supervision of the work – that story was changed by him;  that I asked for ten percent to do what with it ? So I was summoned…” Walker said.

According to Madam Walker, she went along with all of the relevant documentations including the minutes of the meeting to the Speaker of the House of Representatives, contrary to what was allegedly said by Representative Cole.

She vowed to ensure that all developmental projects undertaken in Bong will be in line with the budget law and that same will not be tempered with by anyone, be it a lawmaker.

But reacting to Superintendent Walker Rep Cole refuted such allegations, indicating that he was not the lawmaker that wrote the Plenary.

According to him, it was one of the members of the Bong County Legislative Caucus, who he said got frustrated by Superintendent Walker for about nine months; when she could not initiate the bidding process for the projects for communities in Bong where development was being earmarked.

He said due to the superintendent’s refusal to cooperate with the Bong Legislative Caucus, the lawmaker, whose name he fell short of disclosing had to take the matter to the Plenary.

Representative Cole attributed the allegation by Superintended Walker to someone, who said is allegedly instigating the Bong Superintendent for political reasons just to make the Government look unpopular.

He further said it is due to the superintendent’s inability to submit financial report that is affecting the county’s council sitting.

Representative Cole said the leadership of Superintendent Walker is confronted with serious problems, indicating that he is working with the superintendent to address such challenges, contrary to her assertions that he is against her.