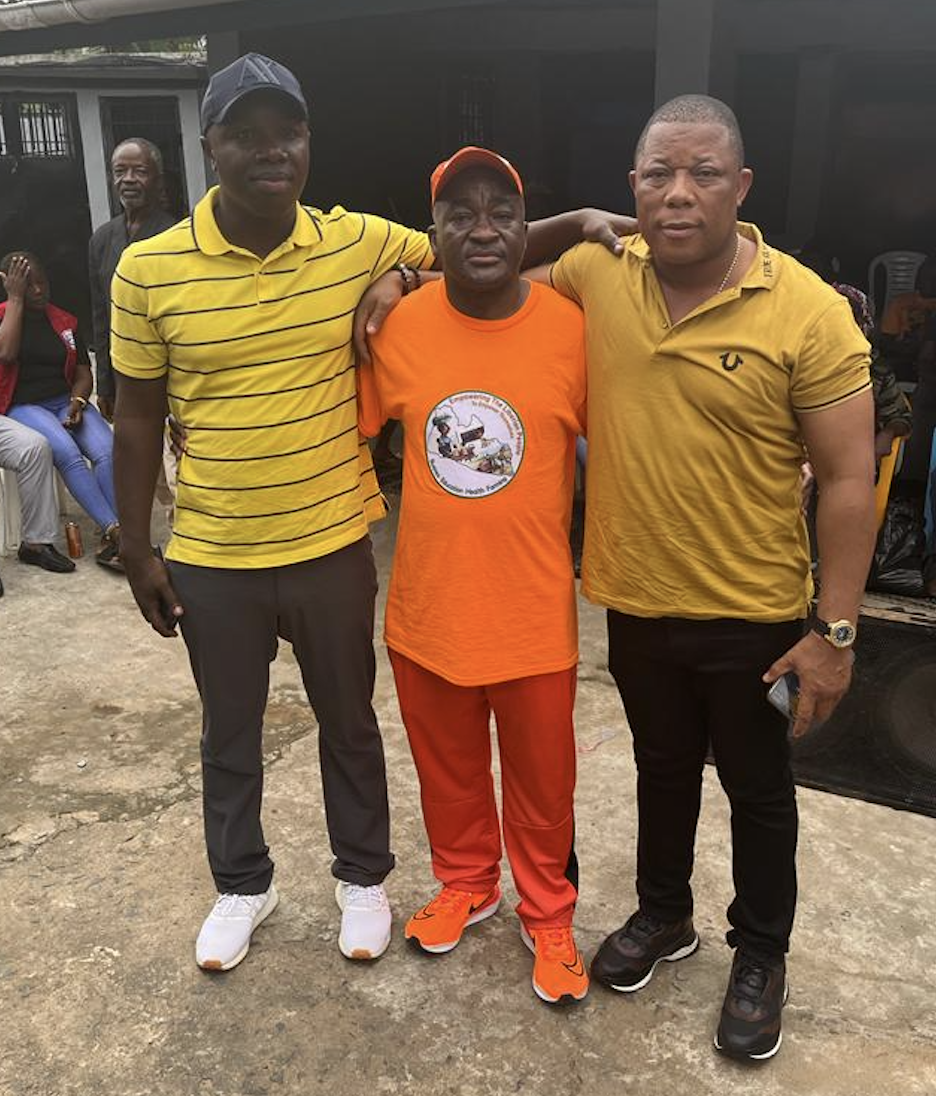 – Says his works are Outstanding

Mulbah K. Morlu, the National Chairman and Secretary General, Jefferson Tamba Koijee, of the Coalition for Democratic Change (CDC) have graded the work of and eulogized the Minister of Foreign Affairs as outstanding and exemplifying.

The made these remarks on December 20, 2022, in Paynesville, at a ceremony commemorating the 57th birth anniversary of MOVEE’s political leader, Amb. Dee-Maxwell Saah Kemayah, Sr.

On early Tuesday morning, December 20, 2022, several members of the National Executive Committee of the Movement for Economic Empowerment (MOVEE), headed by its National Chairman, Robert M. Sammie, organized a surprise visit to the home of Ambassador Kemayah, the political leader of MOVEE and Minister of Foreign Affairs.

Ambassador Dee-Maxwell Saah Kemayah, sr. is President Weah’s Foreign Minister. On Kemayah’s birthday, the National Chairman and Secretary General of the CDC not only celebrated, but also thanked him for his work.

Chairman Morlu said that Amb. Kemayah is one of the pillars of success in the CDC government. He also said that the CDC is proud of its decision to support Kemayah in his role as Foreign Minister.

“I know that I am speaking live on social media, and I am aware that I will be quoted on different media platforms. What I will be saying represents the position of the Mighty Coalition for Democratic Change (CDC),” Chairman Morlu said.

Speaking further, Chairman Morlu said Amb. Kemayah would continue to serve as Foreign Minister until the day of judgment if he had the appointing authority. Even though there has been criticism, the leader of the CDC says that the Foreign Minister is still determined to strengthen and promote Liberia’s foreign policy. Chairman Morlu said that Minister Kemayah has been working to improve and promote Liberia’s foreign policy for the past five years.

In addition, Chairman Morlu encouraged the celebrant, Ambassador Kemayah, to continue the good work of promoting Liberia’s foreign policy and disregard criticism from the opposition because the work of the opposition, he said, is to criticize the government.

Chairman Morlu, however, called on assistant and deputy ministers at the Ministry of Foreign Affairs to lend their support to the reforms Minister Kemayah has initiated at the Ministry to implement President Weah’s pro-poor Agenda for Prosperity and Development (APD).

Mulbah K. Morlu, the National Chairman of the Coalition for Democratic Change (CDC), has initiated conversations with the opposition Movement for Economic Empowerment (MOVEE) about the possibility of collaboration for the 2023 presidential and legislative elections. According to Chairman Morlu, both MOVEE and CDC are working toward the same goal, which is to improve the living conditions of the Liberian people.

Meanwhile, chairman Morlu stated that in the coming days he would work to formalize the relationship with MOVEE, stating, “When a man wants to marry into a family, he has to go to the family.” He cannot say that because I make more money than the girl’s father or because I am taller than he is; you must go there and tell the family that you want their daughter, even if it means sitting on the grounds. It does not imply that you are helpless. We are the ones that need you even more. “We will come to your officers to sit with you and discuss.”

Speaking early, CDC Secretary General and City Mayor of Monrovia, Jefferson Koijee, said he was thankful to God for sparing the life of MOVEE’s political leader to see another birthday, despite the many challenges of life.

The Mayor of Monrovia said he sees the Foreign Minister as his father and leader, which is why he has always stood by him. He said the CDC stands with those who prioritize the welfare of the Liberian people, as he called on other officials of government to emulate the good example of Minister Kemayah, whom he said is working in the interest of the Liberian people. Mayor Koijee wants presidential appointees to exemplify the attributes and good examples of President George Manneh Weah, whom he said is an employee of the people.

“We have come to appreciate you and to send out a message to our friends in government that now is the time that we work together collectively for the good of the people of Liberia,” he said.

For his part, MOVEE’s Political Leader and Minister of Foreign Affairs said he was grateful to God and thankful to both Chairman Morlu and Mayor Koijee for their kind works, and he pledged his everlasting commitment to President Weah and the CDC government.

Massive nutritional support for children under-5 in counties predicted to be...

“I Think the State of Liberian Children Is Changing and a...