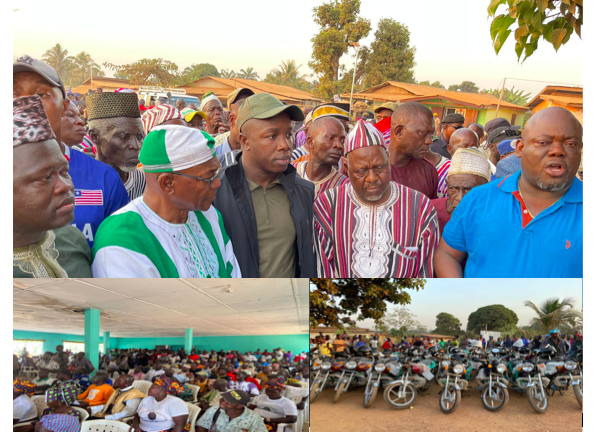 As the fight for control intensifies

Reports reaching Womenvoices Newspaper indicate that the fight for control of the northeastern vote-rich Lofa County, especially Foyah District, has continued to intensify as 2023 presidential and representative elections draw closer in Liberia.

Information privy to Womenvoices shows that Rep. Thomas P. Fallah and Mayor Jefferson Koijee, both ranking members of CDC, who hailed from Foya, have traveled to the County as representatives of President Weah to initiate several developmental projects in the County.

As part of the package, they presented twenty-seven (27) motorbikes to various chiefs and chair ladies of the administrative districts in Foya to assist with their mobility, while three bikes were also given to CDC Zorzor District Charter.

Additionally, the duo (Hon. Fallah & Mayor Koijee) organized a fundraiser to launch an ambitious road project to pave all streets in Lofa, beginning with Foya.

Those that made major contributions include Hon. Fallah and Mayor Koijee both jointly committed $50,000 United States dollars, Mr. Dave Koomey $25,000, Mr. Dee-Maxwell Saah Kemayah, Sr., US$15,000 and Foya Youth for Development LD$250,000,including other contributions from the public.  Hon. Fallah, who is the lead campaigner of the project, made a clarion call to all sons and daughters of Lofa to support the project.

A development committee established for the purpose will implement the project, which is expected to begin soon, and Foya will be completed in December 2022.

While on his way to Lofa, according to reports, Hon. Fallah made several commitments, including to the people of Beyan Town at St. Paul River Bridge, where he promised to beautify the bridge and construct a town hall; to construct a youth center after participating in an annual retreat in Gangolta Town, as well as construct a town hall in Gorlu.

Foya is home of the Former Vice President Joseph Nyuma Boakai, Sr., who is the current major contender to the Coalition for Democratic Change (CDC) led government of President George Manneh Weah.

Ambassador Boakai on his official Facebook page informed the public that he was spending the holidays in Foya and that he was visiting all administrative districts in Foya to share pleasantries (have nice conversation) with his people.

“While in Lofa, I will visit all districts to share pleasantries with the people this festive season. Lofa is, no doubt, largely known to be rich in culture. I believe Liberia’s existing culture must be preserved and passed down to the younger generation. That is what makes us unique as a people, and shows our national identity”, UP Standard-bearer said.

The Former Vice President said, “Mrs. Boakai and I are here in Foya district, Lofa County, spending the holidays. It is always a pleasure reconnecting with family, friends, the women, the elderly, and young ones, at the same time, watching traditional dances and listening to my people speak the local languages”.

With the exception of Lofa County that voted 98% VP Boakai in the 2017 presidential and representative elections, President George Weah overwhelmingly won the rest of 14 counties.

Some observers believe that with massive interventions to better living conditions of the people of Lofa by supporters of the President, Former Vice Boakai is reported to be gradually losing grip on Lofa. Some citizens of Lofa who spoke to Womenvoices described the recent move by Hon. Fallah and Mayor Koijee to undertake major development work in the County as direct penetration in the Former Vice President stronghold.

Mayor Koijee and Hon. Fallah reportedly met with paramount chiefs, zoes, women, youth leaders and clan chiefs in Lofa, and asked for their support for President Weah’s second term bid in 2023. According to sources, Lofa citizens in the meeting accepted their request and committed to formally petition President Weah for his second term bid by April or May this Year, and as well as, openly apologised for the incident that took place at Lofa Bridge, where some supporters of Sen. Elect Brownie Samukai blocked the road sometime last year in demand of the certification Brownie Samukai, who is still battling a court case against the State.