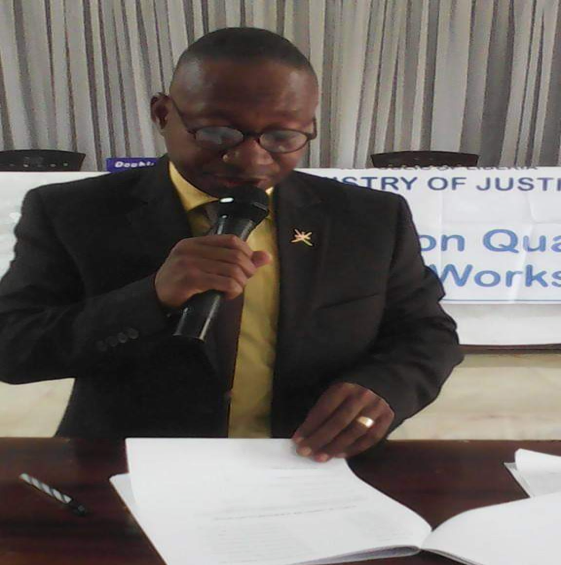 The President of the National Association of Prosecutors of Liberia, Cllr. J Adolphus Karnuah, has termed the reduction in the meager salary of prosecutors as one major factor confronting members of the association, asserting that the situation has reduced prosecutors to the level of mere beggars while doing their work as prosecutors across the country.

The National Association of Prosecutors of Liberia is the umbrella organization of prosecutors in Liberia that seeks to advocate and highlight the interests of prosecutors and partner with the government of the day to alleviate the vexing problems confronting prosecutors across the country.

Speaking on Friday, April 29, 2022, at the grounds of the Temple of Justice during a one-day mini-convention held on the theme: “Tackling pretrial detention to enhance the rule of law in Liberia: role of prosecutors and co-theme: “fighting human trafficking and child labor; forging collaboration among justice actors.” Cllr. J. Adolphus Karnuah identified the current crippling problems for prosecutors as a lack of fuel, scratch card supplies, and government-assigned vehicles. He continued by describing the situation as a mounting problem faced by prosecutors.

“As if matters are not getting worse for prosecutors, the delay and sometimes non-payment of prosecutors’ funds is amongst the mounting problems at the Ministry of Justice. Our members assigned in the southern part of the country are bearing the blunt of the neglect mentioned supra,” he said

Verging his anger, the National Association of Prosecutors of Liberia president maintained that the delay and sometimes non-payment of prosecution funds by the national government is amongst the mounting issues faced by prosecutors at the ministry of justice.

Making an assertion on the security of the state, he stated that if Liberians are serious about fighting crimes and ensuring security for all, then something needs to be done by the Weah-led administration.

Karnuah lamented that prosecutors in Liberia need to be considered essential in ensuring that the rules of law and the fight against crime are adhered to.

However, Cllr. Karnuah urged prosecutors to have the courage and fortitude to continue to do what they know best to ensure that justice is done. At the same time, he cautioned his fellow prosecutors that the purpose of prosecution is not to convict but to ensure that justice is served through the guidance of ethical obligations; thus assuring the public defenders of a cordial relationship in making the justice system of the country better.

For his part, the program director of the American Bar Association, Slaven Lekic, indicated that based on available data, there is an impression that incarcerated people in Liberian prisons are languishing in prison, predominantly in pretrial detention, because of neglect and long years of practice of non-undertaking legal activities by prosecutors and defendants’ representatives, revealing that such a practice violates the rights of imprisoned people, as  stipulated by the UN Universal Declaration of Human Rights, the Liberian Constitution, and several internal conventions and decelerations in charge of protecting the rights of imprisoned people.

He stated that under the applicable provision of the Liberian criminal procedure code, a person cannot be detained for more than two court terms without specific legal justification.

For her part, the National Association of Trial Judges of Liberia president, Judge Nancy Sammy, described the issue of pretrial detainees at various prison facilities as a national emergency.

She wants prosecutors to utilize Section 13.5 of the Criminal Procedure Law by the Courts where an accused is released on his or her recognizance.

The NTJAL president urged prosecutors to avoid or stop delays in drawing indictments and to procure witnesses on time in order to enhance the speed of trial.