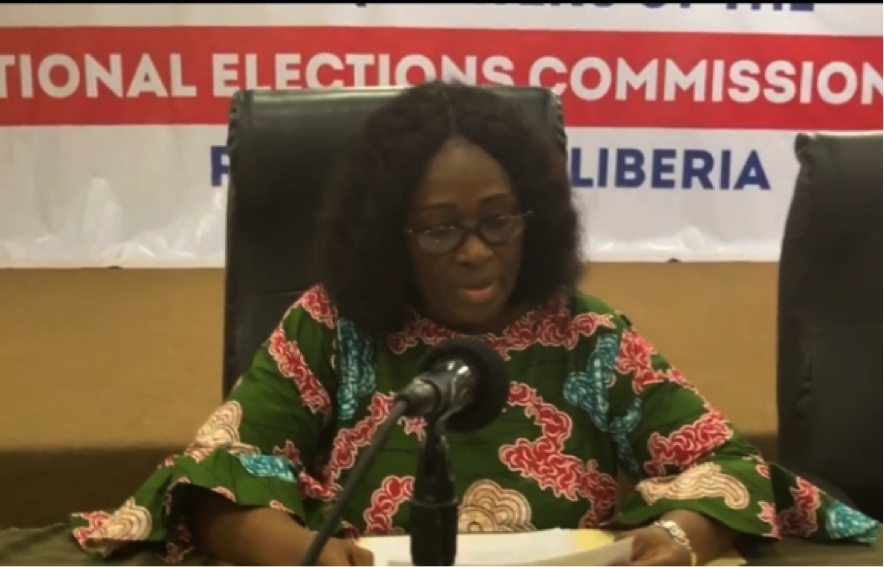 This follows an indictment by the Grand Jury of Montserrado County.

The Court on Thursday confirmed to judicial correspondents that court officers backed with armed police were currently in pursuit of suspect Davidetta Brown Lansanah.

The NEC Boss’ indictment was triggered by the Liberia Anti-Corruption Commission’s investigation report, which implicated her, and another official in corruption and later   recommended their dismissal.

The LACC’s report claimed that the NEC Boss confessed to have awarded contract to her brother David Brown, Vice President of the Tuma Enterprise Incorporated in violation of Chapter 1, Section 1 &3 of the National Code of Conduct for all Public Officials.

Madam Lansanah has long since dismissed the allegation as false and misleading.

In a press conference held at NEC Headquarters on Sunday December 19, 2021, Madam Browne Lansanah offered general response to the LACC’s investigation of the National Elections Commission’s procurement of Goods and Services from Tuma Enterprises.

“We say general response because, as of the time of this statement to you, the LACC has not served us with its report; therefore, we cannot provide a detailed response to allegations in a report we have not seen. Moreover, because the LACC has not served its report on us, we on December 17, 2021 wrote the LACC requesting the report since it had already released the report to the public”, she said.

She however informed the press that on November 19, 2021, the LACC served them with letters of invitation to appear for investigation. “Before the ink could dry on the letter of invitation, the LACC sent it to local media and its Chairman later that day appeared on the Voice of America international broadcast to tell the World the LACC had placed us under criminal investigation”.

NEC Boss said on advice of her lawyers and out of respect for the LACC as another institution of government, she said they remained silent even in the face of what she called the weekly prejudicial leaks by the LACC to certain local dailies claiming it had found criminal wrongdoing but was receiving political pressure concerning the investigation.

“Never before has such calculative and coordinated leaks been seen in the LACC’s investigative history”.

“We believe that an agency with investigative and/or prosecutorial powers is obligated not to make, condone, or cause to be made public statement the agency knows or should reasonably know has the likelihood of prejudicing a criminal matter or heightening public condemnation of the target of an investigation,” she reacted.

Madam Lansanah said following its investigation, the LACC through its Chairman held a press conference on December 15, 2021 in which he told the public the LACC had completed its investigation, and then read out an outcome claiming we had made certain admissions of guilt during our appearance before the LACC. “This is false and misleading. We appeared before the LACC with our legal counsels, submitted the requested documents along with written statements; at no time during the interviews did any of us ever make any admission of guilt as falsely stated during the LACC’s December 15th press conference”.

NEC Boss as they await the LACC’s report to provide a detailed response, she noted that the Liberian Constitution instructs that an announcement to pursue an indictment should not raise inference of guilt, “as all accused persons are presumed innocent until proven guilty beyond all reasonable doubt in a court of law”.

She however assured the public of her commitment to perform her critical role in the system of government to conduct free, fair and credible elections.

But will she continue to perform her duties as promised, with report that she is assumedly on the run, well, time will tell, just keep following Womenvoices.