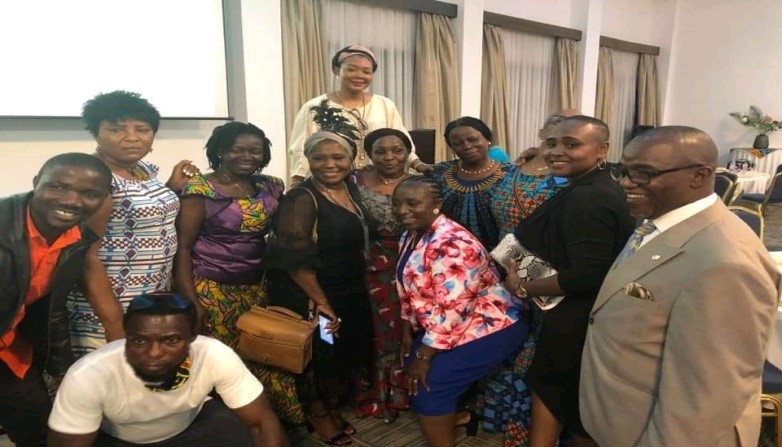 … As Srimex CEO Outlines Their Strengths, Challenges, Others

Madam Powell said Liberian women have and continue to break barriers in Liberia, so it is important for them to support the leadership quest of other women including those seeking elected legislative positions.

She said support for Women Network will help encourage the He 4 Shes counterparts to continue to support Liberian women’s endeavor.

“I stand to encourage all women to work together,” Madam Powell said.

She stressed that strengthening focus on women’s economic empowerment is key and remains the surest path to ending poverty. She emphasized that empowerment of women and girls is vital to any developing nation.

“We all know that women are slowly becoming the next economic force for the world; however, there are many factors that prevent us from becoming more economically productive including lack of access to finance, inequitable legal and social status, barriers to entrepreneurship; lack of education and training; and discriminatory labor policy and practice,” she said.

“So, let’s us continue to be supportive to Women, build  women supportive network. This can help eliminate these challenges and help create the enabling environment for us to share duty as Liberian women and challenge our men in electoral processes,” she emphasized.

She added: We as Women continue to break barriers in our country: We had the first female President in Africa; “We have the only female Senator in our current Legislature, standing before you is the first female CEO of an Oil & Gas Company in Liberia. I may add, we have a record high number of female candidates in this elation and have achieved 33% within the CPP, a feat that was not by error but rather very intentional mainly through women who are beginning to assert themselves,” she added.

The Srimex CEO further reflected on statement made by former UN Women Executive Director, Phumzile Mlambo-Ngcuka, that “Just as a bird cannot fly with one wing, the world cannot progress with half of the population (women) held back. We cannot win with half of the team left outside of the game.”

The Srimex CEO added: “These quotes are so poignant when we think about the reasons we are all here today. We’ve come together today because, in one way or another, we either believe that we need more women in the Liberian Legislature and we intend to put our money where our mouths are.”

Madam Powell further stressed that women who are running for offices are still struggling to raise as much money as men; Men are still making the large majority of political contributions,” she said.

“Male candidates are still raising more money , as such, women have to work twice as hard to get half of what our male counterparts receive because traditionally, women haven’t had the same network of business connections to fund their campaigns,” stresses Powell.

She added: “As we can see from right here in this room today, that tide is beginning to change. We are starting to leverage female candidates against the heightened interest among voters and donors in supporting women candidates.”

Powell hinted out that “Violence against women and girls hinders women chances of taking up the mantle to challenge their male counterparts in equal representation or equality, and at such, in no way, women will compete with men if there’s Violence, sexual assault, harassment against them.”

“So one key issue as it relates to ending violence against women and girl is to have more women elected in the Liberian Legislature, which will create the enabling environment for them to compete and equity will be served.

“We’re here today because we believe that violence against women and girls must end and this will only happen with better and more female representation in the Legislature,” she said.

“We’re also here today because we believe that we can and must do more by investing in women and gender equality to ensure brighter futures for our children.

We’re here today because we believe that we need to work together to maximize achievement of our goal of strengthening women’s economic opportunities and that ONLY together can we go far,” Powell said.

She challenged the CPP women candidates to take up the mantle of bravery and make an impactful change in the Liberian Senate, when elected.

“I want to welcome all of our candidates who have taken up the mantle of contesting for representation at the Liberian Senate. Because of you, we believe that we have a greater opportunity to make real and impactful change in Liberia that will lead to better lives and future of our children and grandchildren.”

Madam Wadei Powell made these remarks at a one-day, Fund-raising Dinner in Support of the Collaborating Political Parties (CPP) females senatorial candidates organized by Senator Nyonblee Karnga- Lawrence. It was held at the Farmington Hotel in lower, Margibi County .

In a special statement, the Political Leader of the opposition Liberty Party and Chair of the Collaborating Political Parties Women, Grand Bassa Senator Nyonblee Karnga Lawrence, widely known as “the face of Liberian Female Politicians,” highlighted that the event was aimed at supporting women for more political spaces in the Liberian Legislature.

Senator -Karnga – Lawrence said the ceremony was also about reawaking women movement in Politics and getting more Women in the Liberian Senate to advocate for women rights, challenges face women and girls, among other things.

“My Quest as the lone female Soldier in the Liberian Senate is to support female candidates to bring more females to the Senate to fight for Women Cause, equity’s and Equality,” she said.

“We’re here today too re-enforced that women who make of half or more than half of our Population deserve more than one senator in the Liberian senate, Senator Lawrence emphasized.

The Grand Bassa County Senator who is seeking reelection describes Women as good leaders who are capacitated and capable of challenging their male Counterparts.

” We can do as men can do.  We are good leaders, good managers, good directors, good CEOs, good administrators and have good senator and very good Representatives too; We are good Vice Presidents and even good Presidents as well, we are capable at all levels, so let’s support women endeavor, women who’re seeking political offices,” she pointed out.

Sen. Karnga Lawrence used the occasion to call for maximum support for the CPP Women candidates ahead of the pending December 8, 2020 Special Senatorial Election.

“we have come to ask all of you to support our female candidates, the purchase of your tickets isn’t such sufficient, but this can help us a lot, our target is 50, 000 United States dollars, but we can even achieve more than that through your one dollar support,” she said.

She emphasized that women candidates face series of challenges and one major challenge is the issue of finance to campaign.

Senator Lawrence then lauded the Political leaders of the CPP, for the Job well done by selecting five females’ candidates to compete in the Senatorial Elections, which she said is a manifestation and milestone.

“Liberians must take part in their economy”