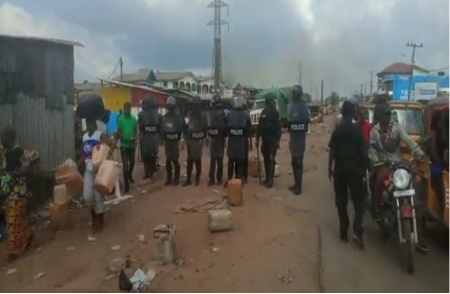 Authorities in Monrovia have disclosed that a joint security operation launched early Tuesday morning, in a bid to clamp down on criminal hideouts to apprehend hardcore criminals bent on causing havoc, was met with stiff resistance from the marauding criminals, who opened fire on the officers that replied with proportional fire power.

According to police spokesman, H. Moses Carter, in the joint security’s quest to clamp down on criminal activities during this festive season, the Liberia National Police (LNP) along with the Liberia Drug Enforcement Agency (LDEA) and the Monrovia City Corporation (MCC) police, launched an operation on criminal hideouts with the team visiting several ghettos on the Bushrod Island and raiding those ghettos.

Addressing a reporters at the National Police Headquarters on Capitol Hill, Monrovia, Carter narrated that when the team of national security officers visited Kuwait, Community, a community in Duala, Bushrod Island, which he said hosts one of the biggest ghettos on that part of the country, the security personnel came under firing attacks from criminals, which according to him left the national security team with no alternative, but to apply proportional force, in line with the use of force.

“The exchange of fire between the criminals and the police left three persons reportedly unconscious and were rushed to the John F. Kennedy Medical Center,” said Carter, who disclosed that a full scale update of the medical status of those rushed to the hospital would be disclosed in the police subsequent update, pending reports from the hospital.

He divulged that as part of the security forces’ Tuesday’s operations14 hardcore criminals were nabbed, but added that sadly 10 stores in the densely populated commercial district, were looted.

Carter stated that the LNP is currently carrying out a hot pursuit in arresting and retrieving looted properties of peaceful citizens, who were victimized as a result of Tuesday’s standoff between state security and criminals.

The police spokesman revealed that a city police office of that MCC, sustained major wound to his arm and is currently undergoing medical treatment, a police anti-robbery vehicle was vandalized by the marauding criminals.

“Two single barrel arms with 48 rounds have so far been retrieved from one of the ghettos in the raided areas, and are in the possession of the Liberia National Police,” Carter said, adding, “Five empty shells of the single barrel arm that were discharged today were also retrieved from scene, as used by the marauding criminals.”

Meanwhile, Carter has averred that calm has been restored to the Bushrod Island with citizens and residents going about their normal businesses, as well as stores and other business houses reopening their doors to the public.

In the wake of the fragile security situation on Bushrod Island Carter said the joint security is guaranteeing citizens’ safety, adding that a major deployment of security officers has taken place with huge officers’ presence currently on the Bushrod Island.

He lavished praises on some members of the media and residents of Bushrod Island, who he said aided the joint security with useful information leading to the success scored in Tuesday’s operation.

We will not forget about you”