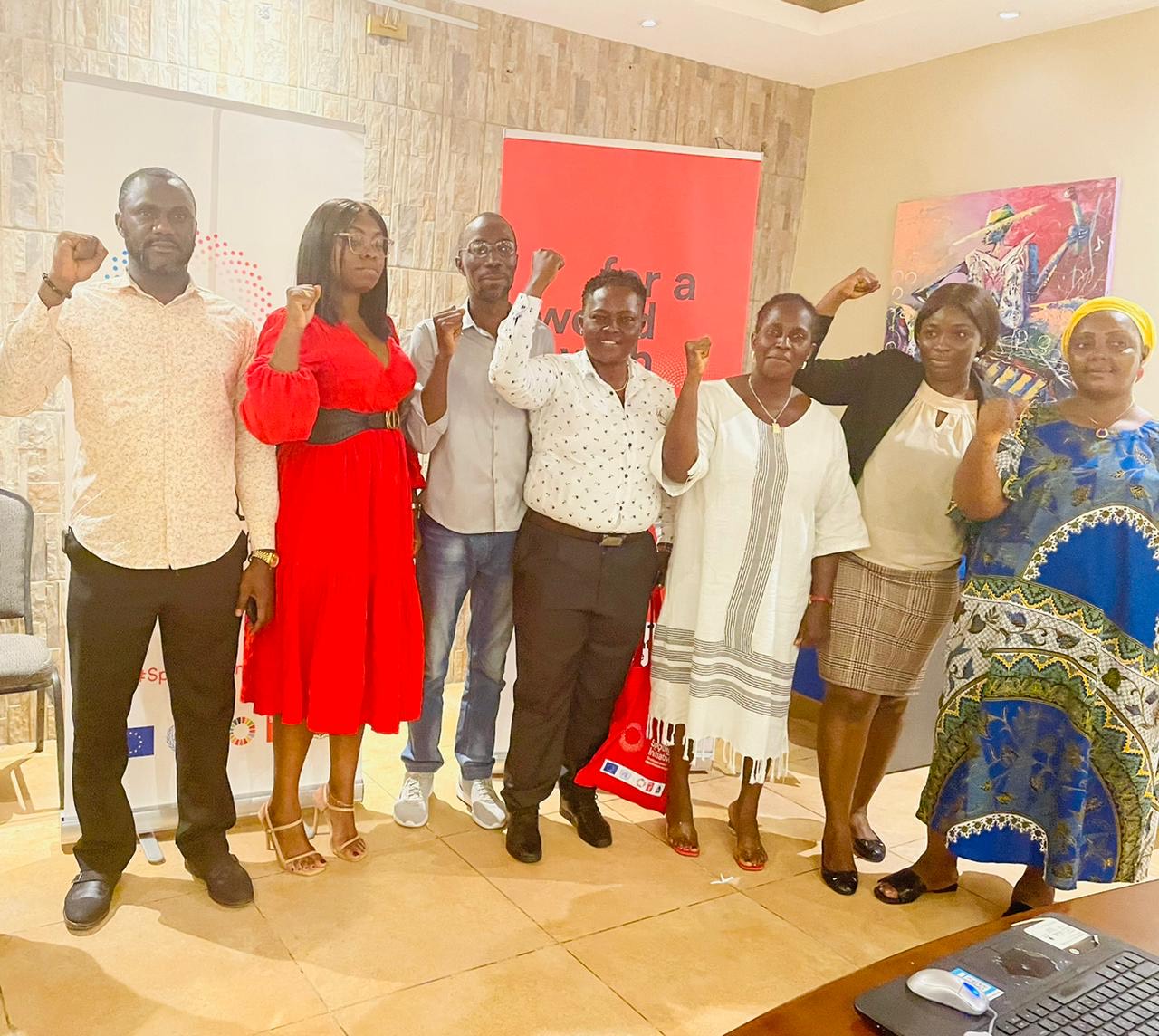 The Civil Society National Reference Group (CSNRG) on the Spotlight Initiative has condemned the cutting of a 11-year-old girl in Margibi County.

The Group also condemned conscription of all other women and girls into Female Genital Mutilation (FGM) practice and is calling for justice and full medical care for the victim.

The called was made on Wednesday, October 26, 2022 at a press conference organized by the Civil Society National Reference Group (CSNRG) in Monrovia.

In a statement, the Chair of CSNRG, Tamba Forkpah Jedidiah Johnson said that their attention has been drawn to the recent report on the conscription of a 11-yrs-old girl by order of the Chief Zoe- Ma Famatta Musa of Margibi County on September 15, 2022.

Johnson said that according to medical report from the Women of Benson Hospital where the victim is undergoing treatment stands to suffer from Fistula due to uncontrollable bleeding after the cutting.

He indicated that based on intervention of one Rev. Tour and other activists, the girl was recused on October 3, 2022 and brought to Monrovia for medical treatment.

He emphasized that respect for the rights of women and girls must be considered and respected although traditionalists have resolved to continue their ancestors’ practice particularly FGM in Liberia.

Johnson also stressed that no person, irrespective of traditional or civil status has the right to conscript, dehumanized, abuse or violate any woman or girl, in adherence to ancestors’ practice simply because they came in contact in practical performance.

According to him, in July of 2020 the Human Rights Council adopted “resolution 44/16 on the elimination of FGM to speed up efforts to reach zero tolerance by 2030 and to restate the global ban on the harmful practice as it constitutes a serious violation of women’s rights” and the call by the UN is in affirmation to Article 5 of the Maputo Protocol and Article 5b of the Liberia 1986 Constitution.

He added that, it can be recalled that representatives of traditional chiefs and Elders from all 11 practicing counties of FGM including Ministry of Internal Affairs, Ministry of Gender, National Working Against FGM, Civil Society Council of Liberia and other actors developed and signed a three-year ban, suspending the practice of FGM practice in Liberia in observance of International Day of Zero tolerance to FGM on February 4, 2022, in Gbarnga City, Bong County.

The CSNRG Chair noted that, the three years ban strictly prohibits the practice of FGM in Liberia adding that “and if any one violet, the traditional council of chiefs and Elders will apprehend and penalized said violators. In contrary, violators are not being penalized, thought there are reported violations by CSOS”.

He further that, in ensuring compliance to the three years ban, some CSOS, including He For She Crusaders Liberia, West Point women for Health and Development Organizations and Community Healthcare Initiative on September 22, 2022 made a visit in Margibi County and met with the Chief Zoe Ma Musa and others however, they pledged to continue their practice of FGM but when violation was reported, the leadership of National Council of Chief and Elders refuted and defended that they were not violating but FrontPage Africa on Wednesday, October 19, 2022 reported that by order of the same Ma Musa, Chief Zoe of Margibi County conscribed a 11-year-old girl child who now stands to experienced fistula.

“The European Union and United Nations has spent over 22 million in Liberia under the Spotlight Initiative aimed at addressing issues of harmful practices, we will not allow our women and girls to keep being mutilated and violated by practitioners. The 2010 Girls Educational Law of Liberia, forbids the operation of Sande-Bush schools in and around schools and domiciles, and also calls for the protection of all girls’ children against harmful practices,” he said.

Meanwhile, Johnson said the declaration of President Weah at the recent United Nations 77 Assembly, that his government is robustly responding to the protection of women should be actualized now by providing justice for the innocent girl.

He reminded the government of Liberia of been a signatory to all human rights instruments which includes CEDAW, Maputo Protocol, Human Rights Protocol and also a founding member of the UN as such they cannot keep violating the rights of women, girls and Marginalized groups.

“We totally condemned the conscription of this 11 years old girl and all others women and girls into FGM and call for justice,” he said.

According to investigation the 11-year-old girl went out to sell along with other kids on September 15, 2022 at which time they heard the sounds of drums and sasa nearby which led them to go and watch the Sande girls dancing when they were abducted.

Eyewitnesses who were on the scene disclosed that the girl was abducted based on order of the head Zoe, Famatta Musa.

The case reported that the girl was chained by her both legs to stop her from escaping, while her face was tied with a black cloth and was eating only leftover food. she was said to be released on October 3 by order of Internal Affairs Ministry upon the complaint of the church reaching the office.

“The child was circumcised beyond measure, which led to her profusely bleeding that they could not stop. In fact, when we found her, she was dying,” the doctor, who attended to her, literately cried, because he said she was cut beyond measure thereby leading to damage to her private part.