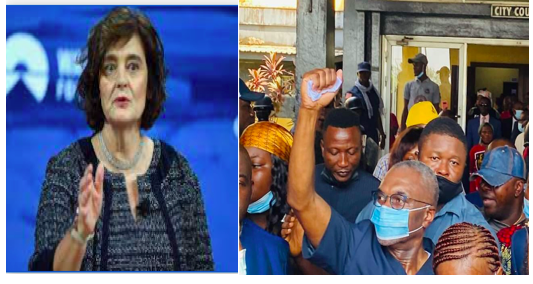 Mr. Alexander B. Cummings, the Political Leader of the Alternative National Congress (ANC), has asked Cherie Blair, CBE QC, to lead an independent and international-staffed forensic investigation into the allegations of document tampering made by the All Liberian Party (“ALP”), which are the basis of ongoing criminal proceedings in Liberia against him and others.

Since the proposed forensic probe looks to be a Cummings-commissioned investigation, many observers are anxious about whether other parties to the disagreement will cooperate with the team of investigators. It’s unclear whether the investigation’s conclusions will have any influence on the pending legal case. Some political commentators argue that such an investigation should be launched in close cooperation with the government in order to establish the facts of the case.

Mr. Cummings strongly denies the allegations made by the ALP and its political leader and Chairman, respectively Mr. Benoni W. Urey and Mr. Theodore Momo, that he conspired to tamper with the CPP Framework Document before or after it was filed with the National Elections Commission (“NEC”) of Liberia.

A press release from ANC said Mr. Cummings commissioned the independent investigation to provide an objective evaluation of the claims made by the ALP and the Government of Liberia. The release said throughout Mr. Cummings corporate, philanthropic, and political career, at home and abroad and his recent political engagements in Liberia, he has always been committed to high standards of integrity, honesty, probity, and transparency; stating that these allegations are an attempt to question and undermine his values.

The release said the investigation is a response to concerns from friends and questions from partners and colleagues, but, above all, Mr. Cummings’ desire to be thoroughly scrutinized through public, private, and all forms of investigation to prove his innocence and highest moral standing. “The findings of this investigation will therefore be transparently shared with the Liberian public and his international partners”.

It is believed that Omnia is an international law firm founded in 2011 by Cherie Blair CBE, QC. Omnia specializes in bespoke dispute resolution and dispute prevention around the world, through its unique Law+ approach, combining legal expertise with experience across policy, business, and communications. Many trust Omnia to provide legal and strategic counsel on a broad spectrum of matters, including international arbitration, business and human rights, public international law and more unconventional problem-solving.

Alaco, which was established in 2002, is believed to be a leading business intelligence and investigations firm, based in London and operating globally on behalf of its clients on both transactional and contentious matters. In support of its clients, Alaco’s multilingual staff draws on its experience from a variety of backgrounds, such as law, government, journalism, financial services, and diplomacy.

Mr. Cummings has instructed Mrs. Blair to “independently, objectively, and comprehensively investigate the CPP Framework Document tampering allegations and to report her findings without fear or favor”.

The release quoted Mr. Cummings by saying: “My opposition to the corruption, incompetence, and mismanagement by the administration of President George Manneh Weah is well-known. My message of real change in the direction of the country and hope in a better future is gaining momentum, as Liberians hold his failing government to account. The trumped-up and false charges are politically motivated to smear my reputation and undermine my candidacy, at home and abroad. It is also a weaponization of the courts, a waste of public resources, and a gambit to have a failed President re-elected by weakening his most formidable challenger or denying my participation in the elections. We will not permit this to happen. Liberians are ready for change, and we are ready to provide the changed leadership, with the high standards of transparency and accountability Liberia desperately needs.”

Cherie Blair CBE, QC said: “We are privileged to engage in this important truth-finding exercise, to independently assess the veracity of the allegations and get to the bottom of this sensitive issue. We are aware of the serious nature of the claims on both sides, and the ramifications of our findings not just for Liberia’s opposition but for the country’s future.”

The release did not say when will the investigation start or end, but it is expected to begin very soon according to insider account.