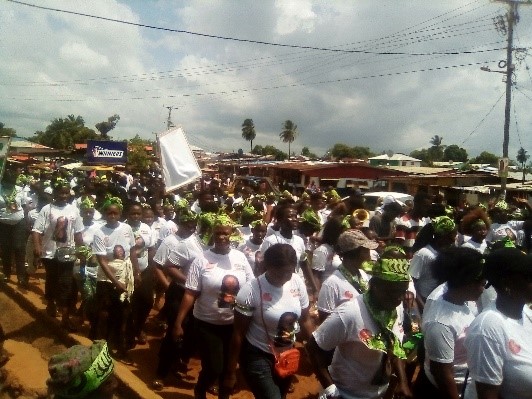 The candidacy of Cyvette Gibson, an independent female candidate in the ensuing Montserrado County, District #9 Representative By-Election received a huge boost,  when several women groups and others endorse her candidature on Tuesday, November 10, 2020.

The all-important endorsement ceremony was characterized by jubilation from women groups, motorcyclists, private school teachers among others, who commenced the occasion with a parade through the the principle streets of Montserrado County electoral district #9, climaxing same at the All God’s Children Compound located in the district.

Speaking during  the colorful endorsement program,  the President of the Sinkor United Private School Teacher’s Association, Cyrus Glay  lavished praises on Madam Gibson  for taking the bold step to contest for the vacant Representative seat in district #9.

According  to Mr. Glay, that such decision on the part of Madam Gibson will save  their district  from the hands  of those he described  as wicked and corrupt  male politicians .

“ Your participation in this by- election is a clear manifestation that the women  and young girls of district #9, have spoken with one powerful voice and are ready to vote a female candidate  to  replace  the female  representative  who  did not fail us like the male representative in person of  Mr. Dusty Wolokille.  who served from 2006-2011,” Glay noted.

“On this note , let  us say no to every  male  candidate in district #9,” he emphasized.

He added  that due  to  her competency  in various administrative  capacities   that included  the Deputy Major of Monrovia  City  Corporation (MCC), Mayor of   Paynesville City Corporation (PCC),  as well as her invaluable services to humanity, Madam Gibson is the preferred choice for the district #9 job.

According  to  the president of the Sinkor United Private School Teacher’s Association  Madam Gibson  has done a made numerous contributions both to Montserrado county and the country at large, citing  the her role in acquisition of an electrical transformer for the 12st community, building of hand pump in Gbankay’s  Town  Community , building of a bridge  on  the Fredrick  Island among others.

He said based on  the female candidate’s immense contributions his organization was left with no other alternative but to endorse Madam Cyvette Gibson  candidacy  for the representative post of District #9, Montserrado County.

Also presenting endorsement statement on behalf  of the women at the ceremony,  Madam Bentta  Smith  said  majority of the women in the district have made a conscious decision to support Madam Gibson’s bid for the house of Representatives, adding that their support with be backed by concrete commitment  to ensure  that the female candidate is elected come December 8,2020.

She intoned that their decision to support Madam Gibson’s bid  is based on the female candidate’s humanitarian efforts in transforming  the living conditions of the women and children of the district.

She the urged residents of District #9 Montserrado County to collectively support such a candidate with a lot of experience and qualities in both the public and private sectors.

Also endorsing Madam Gibson’s candidacy was the head of district’s Motorcyclist Union, Donaidson Ball, who said the motorcyclist union has been for a long time been observing the works of Madam Gibson over the years.

He averred that her works have prompted the motorcyclist union to fully endorse her candidature.

Mr. Ball then vowed to campaign throughout the length and breadth of district #9 to ensure that the female candidate gets elected.

Responding  to the various organizations’ endorsement statements,  the independent female  representative  candidate  Cyvette Gibson  appreciated   the various groupings,  especially  the women  for  their commitment  in supporting  her quest  to  represent  them at the Legislature.

She told  the gathering  that   her vision  for the people  of the district  is total development  that will include  empowerment  for  women  through training , scholarships  for young people, aimed at particularly assisting parents who cannot afford to pay their children’s school fees .

Madam Gibson said if elected, her leadership will be based on transparency and accountability at the Legislature.

She further told her jubilant supporters that if elected, she will give back fifty percent  of her salary to the district for development purposes.

However, the former Paynesville City Mayor indicated that if elected or not, she would provide scholarships for the young people of district #9, adding that she is committed to this.

She told  Montserrado county district #9 residents  that  it is about  time  that  they elected a lawmaker  who will  have  the ability  to articulate  the issues  and compete  with other lawmakers  on national issues at  the Plenary of the House of Representatives, to their advantage.

Madam Gibson said with the experience and education she has acquired over the years, she is best suited to represent the loving people of Montserrado district #9.