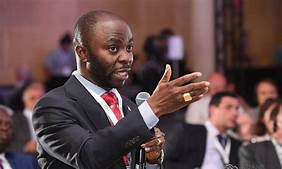 According to a press release, Atty, Jackson expressed deep disappointment over the Judicial Inquiry Commission’s suggestion that Chief Justice Francis Korkpor is “above the law, even where it is plain and obvious that the Chief Justice has broken the law, violated the judicial canons and engaged in ethical transgressions contrary to the internationally acceptable norms of natural justice as well as the canons and  general principles governing the practice of law and the actions of judges in the country.”

“All persons, including the Chief Justice, must be subordinated to the law and made to answer to its ordinances especially those to whom the public has entrusted the high honor to interpret the law and administer justice”, Attorney Jackson said.

“As Associate Justice Yussif Kaba has attempted to do in the name of the Judicial Inquiry Commission, to hide the Chief Justice from answering for his obvious violation of the law, principles of natural justice, and misconducts for which he is being accused, does not only establish a disgraceful and dangerous precedence, but also amounts to an act of cowardice and a declaration of guilt likened to a common criminal fleeing from the light of justice”, the suspended lawyer said.

Adding: “It reveals the inability of the Chief Justice to legally defend his violation of the law and his unethical conducts, all of which, unfortunately for the country and our aspiration for justice, combine to embarrass and burden the Supreme Court, the highest in our land, with public ridicule and lack of public confidence”, Jackson added.

It can be recalled that on September 4, 2020, the Chief Justice, His Honor Francis S. Korkpor read the Opinion in the case Isaac W. Jackson, Jr., v. The Executive Branch of Government in which he accused Attorney Jackson of “egregious assault and insult” on him as contained in the April 22, 2019 edition of the FrontPageAfrica Newspaper. The Chief Justice, speaking for the Court, ruled against Jackson in his long-running challenge of his dismissal by President Weah, and suspended Jackson’s license to practice law in Liberia for one year, and further threatened to extend the suspension to permanent disbarment unless Jackson publishes letters of apology to the Chief Justice within three months.

On September 21, 2020, Jackson complained to the Judicial Inquiry Commission that he was denied his constitutional right to be heard, and that the Chief Justice engaged in ethical transgression by accusing him for the first time in an Opinion, then using the Opinion which he wrote and delivered to judge Jackson and deny him his right to practice law in the country. Jackson also accused the Chief Justice of unjustifiably and illegally bundling his (Chief Justice’s) accusation of “egregious assault and insult” with Jackson’s claim against the President. He therefore accused the Chief Justice of acting unethically and prejudicially, and complained to the Judicial Inquiry Commission.

In its response, dated September 29, 2020, the Judicial Inquiry Commission, citing Judicial Canon 40, says, the Commission as currently constituted lacks the competence to entertain a complaint against the Chief Justice of Liberia. Accordingly, while the Judicial Inquiry Commission can review and investigate the alleged misconduct and ethical transgressions of associate justices, judges and lawyers, it cannot even hear complaints of ethical transgressions against the Chief Justice.

According to Attorney Jackson, to express a lack of competence to hear complaints against Chief Justice Korkpor is to unwittingly confirm the US State Department Report of 2019, which points to massive corruption in the Liberian Judiciary; and that both the Grievance and Ethics Committee and the Judicial Inquiry Commission lack appropriate guidelines to deliver their mandates effectively, and are perceived as nontransparent organs which are subject to influence.

“By his claim of the “lack of competence”, is Associate Justice Yussif Kaba, therefore suggesting that the Judicial Inquiry Commission, and indeed himself, lack judicial competence to apply the law and governing standards of ethics against the Chief Justice”, Jackson asked.

The Outgoing Permanent Representative to the IMO wondered: “With this self-declaration of a lack of competence; how can the Liberian public reasonably expect Associate Justice Kaba to independently function on the Bench of the 5-member Court, or dissent against the Chief Justice, should the objects of justice require him to, if he obviously views the Chief Justice as too powerful, too big and above the law?”

“The scale on which the current judicial officers are violating the law, including at the highest levels of the judicial system of our land, is seriously concerning and deeply troubling for the country’s peace, stability, security and democracy”, Jackson observed.

“I am shocked to recently discover that Associate Justice Kaba who heads the Judicial Inquiry Commission, signed the Opinion in my case, Isaac W. Jackson, Jr., v. The Executive Branch of Government, without ever hearing the case. Little wonder therefore that he is desperately engaged in a cover up of the Chief Jjustice and ostensibly himself, at a shameful detriment to the integrity of the rule of law, and the independence of the Honorable Supreme Court”, Jackson stressed.

Jackson says, realizing his obvious prejudice and compromise, the honorable thing to have done, if Associate Justice Kaba had any scintilla of respect for judicial proceedings or a commitment to the principles of fairness, he should have recused himself, and ask the Secretary General of the Commission, or the President of the Bar, to preside over the probe against Chief Justice Korkpor since he (Associate Justice Kaba) is conflicted.

“To subject the judiciary and the judicial system in a coverup, and impress the country and the world that justice is selective in Liberia, as Associate Justice Yussif Kaba is attempting to impress, is disgraceful and dishonorable”, Attorney Jackson added.

Jackson reminded Associate Justice Yussif Kaba that although the head of the Liberian Judiciary, the Chief Justice is his colleague, and ‘first amongst equals’. It therefore ought to reasonably follow that if the actions of Associate Justices can be reviewed and investigated, so, too, can the Chief Justice because intrinsically, in a democracy, no one, in perception or reality, is above the law.

Meanwhile, the outgoing Permanent Representative to the IMO says the intervention of the international community is crucially important to prevent the reemergence of the ugly ghost of the past whereby judges and justices in Liberia took direct instructions from the President regarding the dispensation of justice in the country.

He emphasized that Liberia’s democracy will be meaningless if the powerful and powerless are not equal before and subjects of the same law.

“Therefore, I am calling on the United States Government, ECOWAS, EU as well as human rights organization to take seize of this matter, and prevent the continued abuse of my right, and those of my family members, including my three innocent children and wife, whose livelihood and mine, are now threatened unfairly and unjustly, without any available recourse to justice in Liberia, as pronounced by Chief Justice Francis Korkpor, and subsequently confirmed by Associate Justice Yussif Kaba”, Attorney Jackson pleaded. “When justice is denied one, it must resonate as a denial of justice to all because in that denial is the precedent to deny justice to all. I therefore extend a special appeal to the moral voices in the country, including the Council of Churches; Catholic Bishop Conference; National Muslim Council and the Liberia National Bar Association as well as other eminent jurists and leaders in the country, to publicly express themselves on this and other deeply concerning issues of injustice, and the growing lack of independence, courage and integrity of the courts. The demand for justice is a responsibility for a society desirous of living in peace to collectively bear. As such, the continued silence in the face of injustice is collectively threatening and dangerous”, Jackson concluded.

Suppression of the People’s Will Can Backfire