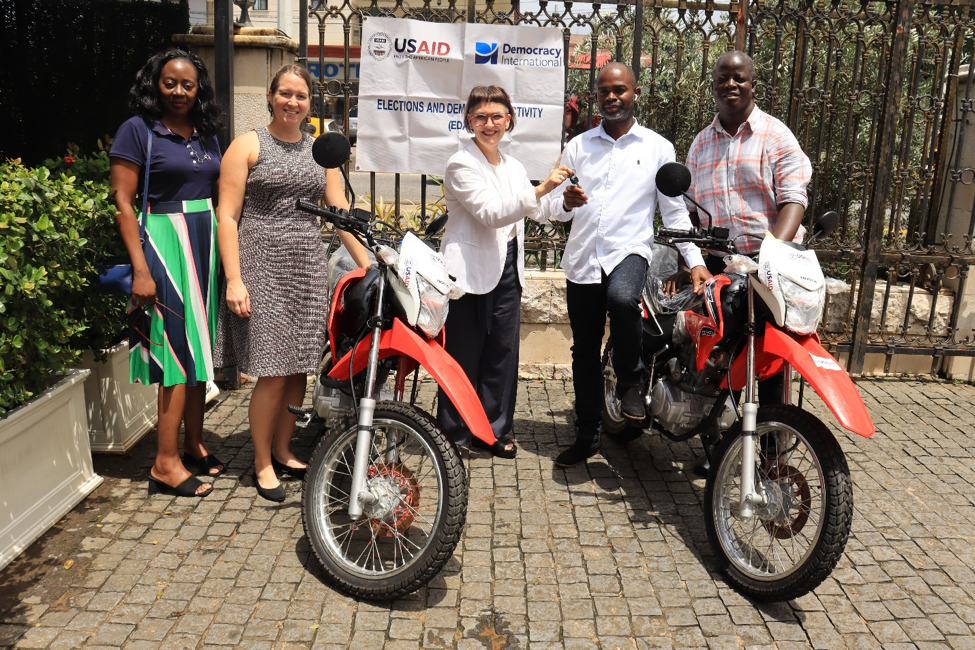 The Youth Movement for Collective Action (UMOVEMENT), a partner of the United States Agency for International Development (USAID)-funded Program, the Elections and Democracy Activity (EDA) in Liberia, has received two motorbikes from Democracy International (DI) on July 14, 2022 in Monrovia. The motorcycles are being donated to UMOVEMENT to assist them in their work in the counties as part of the EDA Project.

UMOVEMENT is a sub-grantee of DI on the EDA Project and is assisting the Ministry of Education in achieving its objective of implementing a nationwide civic education curriculum. EDA will provide funding to UMOVEMENT to assist the MOE in reaching 60,000 kids, or 10 percent of Liberia’s primary school students.

During the motorbike handover, DI’s Chief of Party, Stephanie Lynn, revealed that the motorbikes were leased to UMOVEMENT for the duration of the EDA Project and were made possible by USAID as part of its support for the EDA project in Liberia. The COP commended UMOVEMENT for its work on the EDA project and encouraged the group to continue its work on civic education in the counties using the motorcycles. The motorcycles are supplementary backup to the Nissan Patrol that was provided to UMOVEMENT earlier this year.

Urias, the head of UMOVEMENT, thanked USAID and DI for the motorbikes and assured that his group will utilize them for monitoring and coordinating EDA activities in the counties upon receiving the keys. Mary Zell of USAID observed the tragedy. The Elections and Democracy Activity (EDA) is a USAID-funded project aiming to assist Liberia in overcoming the greatest risks to its democracy and fostering inclusive, long-term democratic political growth. The EDA collaborates with civil society groups (CSOs), the National Elections Commission (NEC), and the Government of Liberia (GOL) to produce elected officials who are accountable to their citizens and who rule in their best interests. The EDA has three interrelated goals: (1) increasing the leadership of marginalized groups in political processes; (2) enhancing civic knowledge and a sense of civic duty; and (3) promoting the independence of the NEC and civil society