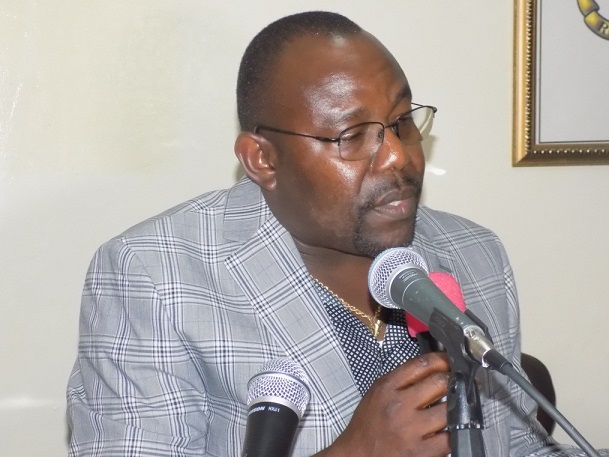 Paynesville: The Deputy Minister for public affairs at the Ministry of Information Cultural Affairs and Tourism, Eugene Fahngon, has dispelled rumors that he has resigned his post.

Recently, rumors have been rife, especially with social media going abuzz over the purported resignation of deputy minister Fahngon from the George Weah-led government.

But Fahngon cleared the air Monday, at a media gathering, declaring that “at no point in time did I resign,” adding, I’ve got no intention of resigning.”

“I will never resign from this government,” emphasized Fahngon, who explained the reason behind him reaching the conclusion never to resign from the CDC-led government, as his commitment to the fulfillment of government’s Pro Poor Agenda for Prosperity and Development (PAPD).

“If anybody thinks that I will resign, maybe, they might be thinking right; because I may resign in 6064,” said Fahngon rhetorically, further saying, “but not now, not anytime soon, not never!”

He said the PAPD is a revolution with the objective to change Liberia, a revolution Fahngon noted he has been given an opportunity through his appointment in government by President Weah, to help make a reality.

The controversial deputy minister, who averred that another reason why he will not resign his post, is because he has a moral obligation to serve his country, blamed the spread of rumors of his purported resignation on members of the opposition bloc, who he said have a plan in place to break from around President Weah those he described as pillars. He named Presidential Affairs Minister, Nathaniel McGill; Finance Minister, Samuel Tweah; and himself, as some of those he referred to as pillars around the Liberian president.

Howbeit, Fahngon intimated that despite the opposition bloc’s alleged plan to put asunder the Liberian leader’s ‘inner circle’, President Weah is smart enough to know that he has lots of those he (Fahngon) described as “good lieutenants.”

He thanked President Weah for having in his ‘inner circle’ those Fahngon described as “great men.”

Like in a football match, while referring to himself as a “midfielder,” Fahngon said he’s not moved by the opposition’s alleged act of spreading rumors regarding his supposed resignation, describing same as an attempt to take out the “midfielder,” adding that this is nothing strange.

He indicated that instead of spreading rumors, members of the opposition bloc should instead follow President Weah’s ‘inner circle’ and “good lieutenants,” because according to him, they are now driving the country’s developmental agenda and what he calls the narrative.

Fahngon, who intimated that his commitment is to the PAPD and the revolution to change Liberia, emphasized that he remains Liberia’s deputy minister for information, stressing that he will continue to serve in such capacity until President Weah thinks otherwise and makes a decision about his (Fahngon’s) services in government.

“We are developing our country, and nothing will stop it,” said Fahngon.