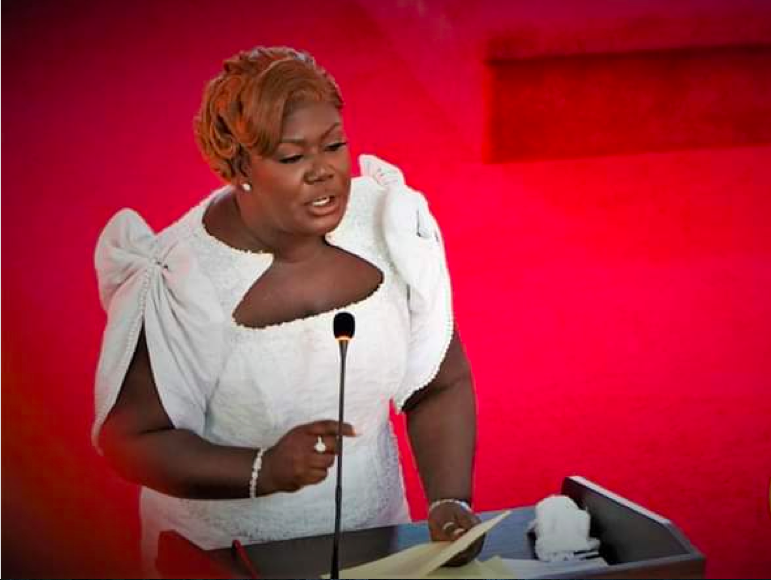 On July 26, 2022, the National Orator of Liberia’s 175th Independence Celebration, the Honorable Mawine Diggs, urged public leaders to stop romanticizing Liberia’s issues. She urged public officials and colleagues who are in the habit of constantly praising brilliance to stop and begin practical work that would serve to improve the lives of ordinary Liberians by implementing the Pro-Poor Agenda for Prosperity and Development in its entirety (PADP).

The eloquent female speaker stated that while President Weah’s administration inherited the problems, individual government official made a conscious decision to accept a post, which she characterized as a commitment to assist fix the problems.

“This brings me to the point of urging our leaders, in every sector, particularly my colleagues in government to desist from romanticizing the genuine challenges we face. It is a known fact that these are inherited challenges but by assuming the roles we have today we have each made a conscious choice to commit to alleviating these challenges in support of the President’s Pro Poor Agenda for Prosperity and Development (PAPD). Let us therefore desist the desired attempts to show off our literary brilliance and instead act. Let us work for the people of Liberia,” she said.

She said government’s actions should manifest in every sector, including respect for the rights of women, boosting that Liberia is currently acclaimed for breaking the glass ceiling, while at the same asking her colleagues in government to continue to forge ahead and not pay lip service or relegate, stating “That my fellow Liberians would be a true travesty”

Furthermore, the fearless orator also questioned the manner in which dollars of donor monies are been used, contending that they do not match with reality on the grounds. Madam Diggs said it is now time that government sits with development partners and fully examines the impact of these donor sponsored loans and grants in order to assess the true impact on the lives of our people. “What goes into deciding how projects are determined or selected? Where and what part of the country are those projects implemented? and under whose authority are those monies expended?”

Minister Diggs continues, “Let me boldly say that in terms of addressing governance and accountability concerns, we have done everything as a nation, from changing governments, to fighting a senseless war, firing ministers and heads of agencies, voting new members of legislature, but yet the one thing that remains constant is the mode of operation of donor funding regardless of the government in power or the lack of tangible impact seen. This must change. Accountability must be on all sides”.

She said if they were to pause for a moment and request the dollar value of the total amounts in donor funding over the last decade or two, whether in the form of loans or grants, “I am certain it will be several billions of dollars. Yet, if we are to match that with the corresponding impact, we would all agree to a re-examination of the mode of operation of donor funding”.

She said though donor community remain as valuable partners in keeping Liberia’s peace and promoting development agenda, however, in partnerships there must be honest exchanges and flexibility in operations to truly support the agenda of a nation. She pointed that the level of bureaucracies in the approval and procurement processes and the excessive control over these projects can lead to reduced impact and subsequently shift the pressure back to government, who in most instances have little or no control over these projects but yet are held accountable for the dollar value of these projects.

“On the average it takes half of a presidential term, if not a whole term to get a donor funded project signed, implemented and completed. This I am certain needs to be looked at critically”.

She their role is crucial in helping the president deliver on his Pro Poor Agenda for Prosperity and Development, “this must never be taken for granted”. She said it is an expectation that the children and people of Liberia benefit from the decisions we make and the impact those decisions have on their lives. Minister stressed the need for all to strive to reduce the bottlenecks associated with the implementation of these donor projects, as those delays work against the timely delivery of these projects in the interest of the Liberian people.

The 39-year-old orator, who is a single mother said her selection to serve as National Orator was not a mistake, informing that she is a clear demonstration of what happens when preparation meets opportunity. “I proudly stand here today as a 39-year-old, highly educated single mother who challenged herself to leave her homeland, prepared both educationally and professionally to return home and contribute to her nation. I represent every individual who has ever had to make hard choices and sacrifices for family, love of country and humanity. I represent every woman and girl who the world doubted her ability to lead. I represent a generation determined to change the landscape of this country and most importantly I represent the product of every mother who has sacrificed to give her child a better opportunity”.

The orator said when she thinks about the future of Liberia, she thinks about what lies in store for children like her 5-year-old daughter Mariella and little Nya of Ganta city. She said there can be no wavering when it comes to Fostering Unity, Protecting Our Peace for Development and Prosperity. So for every one Liberian who chooses not to step up and make an impact in this country, according to her, there are many willing to step up to the challenge and make a difference.

Thousands Flee To Liberia, Others