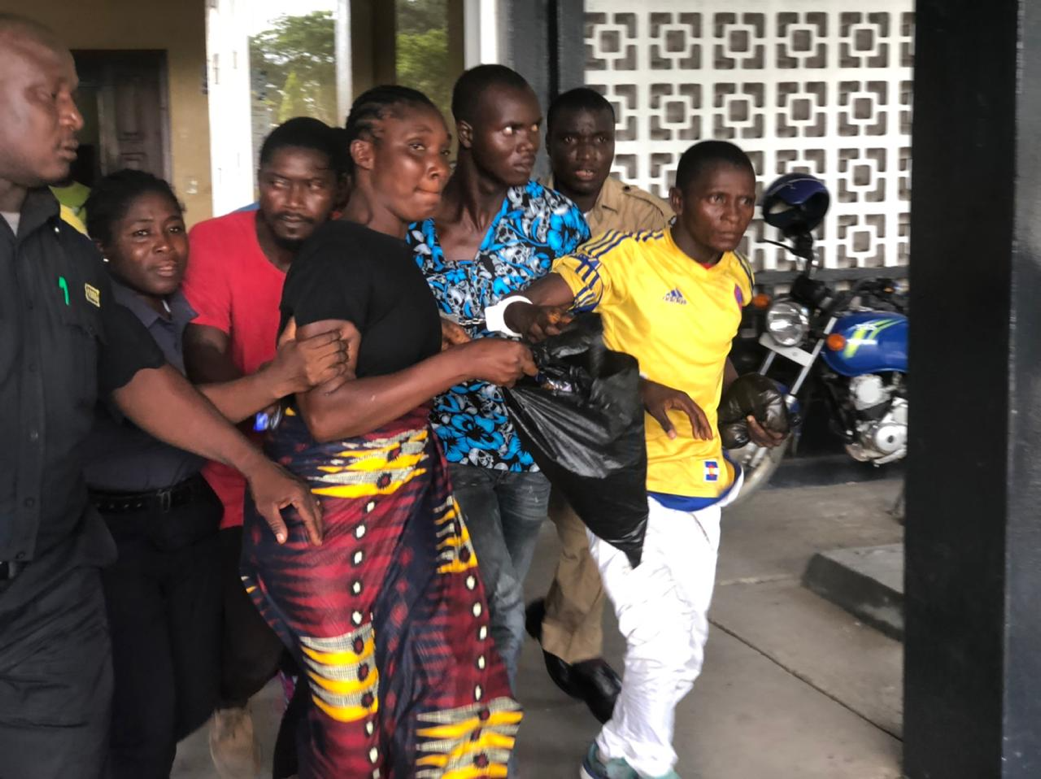 A thirty-five-year-old woman, identified as Ophelia Targbe, has been forwarded to court and subsequently to jail for alleged circumstantial murder in connection to the death of one Jefferson Dweh, who is believed to be her fiancé.

According to Police report, on March 26, the lifeless body of Jefferson Dweh was discovered in a swamp of the Battery Factor Community behind Targbe’s house. An Eyewitness told police Jefferson was seen the day before incident at Targbe’s house in the same community.

Defendant Targbe was taken to the South Beach Prison as her alleged actions were in violation of chapter 14, subchapter “A”, section 14.1 of the revised Penal Code of Liberia.

According to the police charge sheet, a copy which is in the possession of this paper, defendant Targbe was turned over to the Crime Against Person Unit (CAPU), familiarized with her constitutional rights, investigated, and subsequently charged her with circumstantial murder.

The police said it is holding defendant Ophelia Targbe responsible due to her failure to properly explain how the victim’s, Jefferson Dweh, clothes remained in her house while his lifeless body was discovered in the swamp at the back of her house.

The police’s report further indicated that defendant Targbe and the late victim were lovers. They had known each other for about a year, but only had an intimate relationship for at least two months, and had visited her on three occasions.

“On Saturday evening, March 25, 2022, victim Dweh visited her girlfriend, defendant Targbe, at her house in his working clothes. The victim asked his girlfriend that he wanted to take bath, and she helped him with water,” the police investigation established.

The police investigation revealed that while the victim was with his girlfriend, defendant Targbe, her daughters Faith and Princess came from drawing water and they met their brother Prayer and Mark watching movies on Mark’s phone. They decided to join them and watch the movie while victim Dweh was in the room with his girlfriend, Targbe.

The investigation further explained that when Mark was about to leave, Faith and Princess decided to go along with Mark for Faith’s phone, which she left on charge at the charging booths.

While the two children were away, the police charge sheet made no mention of what happened between the victim and the defendant. The victim may have attempted to violently have intercourse with the defendant while the other two kids were gone, but was assaulted with a stake by the defendant’s daughter, Princess, who was left in the living room after her siblings walked out.

If this account is true, Madam Ophelia Targbe may end up in jail instead of her daughter, who may have come to her mother’s aid. According to a lawyer who spoke on the condition of anonymity, if Madam Targbe tells her account in court, she would be released, while her daughter will be prosecuted for manslaughter, which is a chargeable offense with a lighter penalty if proven guilty. Is Madam Ophelia Targbe willing to subject her young daughter to such a traumatic experience? It’s a heartfelt decision that she might want to take.

The police investigative report in the charge sheet noted that during the morning hours when the body was discovered by a neighbor to be identified, defendant Targbe allegedly immediately collected the victim’s clothes from her house, placed them into a rice bag and gave the same to her son, only identified as “Prayer,” to deliver the clothes to Oretha Musa for reasons best known to herself.

However, the police investigation noted that victim Dweh’s clothes, including a red helmet, an orange reflector jacket, a black safety boot, and a blue T-shirt, that were taken away by his girlfriend to her next-door neighbor’s house, were retrieved.

“In view of the foregoing facts and circumstances, coupled with evidence adduced (victim body) as well as witnesses and defendant testimonies, this investigation has resolved to charge defendant Targbe with the crime of circumstantial murder, in accordance with chapter 14, subchapter “A”, section 14.1 of the revised Penal Code of Liberia and be forwarded to court for prosecution.

Madam Ophelia Targbe, a single mother, will undoubtedly be upset by the fact that young children are now forced to fend for themselves.