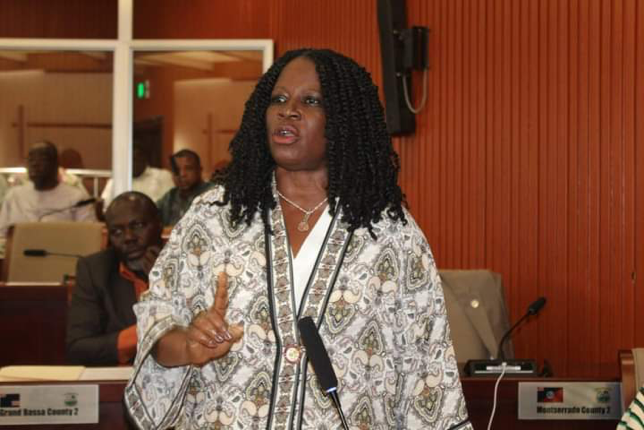 The Grand Bassa County Senator Nyonblee Karnga Lawrence has asked the President Weah to dismiss those in charge at LISGIS, ask the GAC to audit the process, and constitute a new management team with the requisite qualifications and expertise to conduct the process. This comes as controversies continue to entangle the conduct of the national population and housing census.

Senator Nyonblee Karnga Lawrence issued the following statement on her official Facebook page late on the evening of Friday, November 11, 2022: “Those with the obligation have consistently failed and should be held accountable for their acts while an alternative is sought to conduct the census.”

She made the following observation: “Once more, the individuals responsible for the debacle that was a CENSUS exercise that was supposed to have taken place today must account for the waste of much-needed resources,”

She stated that as a nation, the human capacity gaps in key governance areas are a matter of public knowledge, and as a result, attention and priority should be given to the conduct of the national population and housing census in order to ensure that it is conducted within the appropriate amount of time.

On the other hand, the Senator representing Grand Bassa County stated that the failure of the Liberia Institute of Statistics and Geo-Information Services (LISGIS) to begin the 2022 census on the date that was specified as having been provided was the epitome of incompetence on the part of the national government.

She stated that the process of deployment ought to have taken no less than ten days and that all enumerators need to have been deployed three days before the counting process for the sake of mobilization and awareness.

She says, “The only inference deducible from their insistence on performing the census today is that all steps were put in place to ensure that the exercise was carried out in a seamless manner.” [citation needed]

The fact that President George W. Bush issued a proclamation on Monday, November 7, 2022, designating Friday, November 11, 2022, as a national holiday, in order to commemorate the beginning of the national census count, is something that can be brought up as a reference.

In the meantime, the beginning of the National Population Census, which had been officially planned to take place on October 24, 2022, was pushed back because of claimed complaints of irregularities.

Recent rumors have it that the UNFPA will take control of the procedure beginning on Monday, November 14, 2022, according to a story that surfaced not too long ago.

The Liberia Institute for Statistics and Geo-Information Services (LISGIS) carried out the most recent population and housing census in the country of Liberia in the year 2008.

The full name of the Act is “The Liberian Code of Laws Revised, As Amended, By Adding Thereto A New Chapter 50A.” However, as stated in Section 50A.1, the Act’s short title is the “National Statistics and Geo-Information Act,” and this is the name that is typically used when it is referenced.