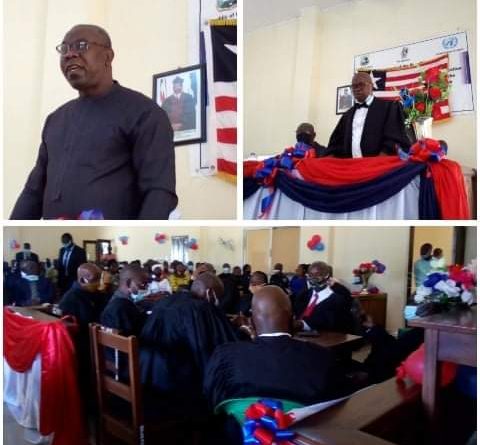 Gbarnga: The Ninth Judicial Circuit Court located in the central Liberia city of Gbarnga, Bong County has officially open for its November term of court.

The court’s opening was officially graced by several lawyers, assigned magistrates from across the county, members of both the Armed Forces of Liberia (AFL), officers of the Liberia National Police (LNP), county officials including the superintendent, land administrator, jurors and other court officials and citizens of the Bong County.

Delivering his charge, Ninth Judicial Circuit Court Resident Judge, J. Boimah Kontoe described his retention in the county to the upholding of the rule of laws.

“The disposition of these cases were possible due to the hard work of the County Anthony Jonathan Flomo, Mohammed Gorlafally and George Witherson Bomosee,” Judge Kontoe disclosed.

He said the 9th Judicial Circuit Court disposed of the highest number of cases across the country during the August Term of court, although he didn’t give statistics from other courts to substantiate his assertion.

Judge Kontoe however, strongly warned lawyers and others not to mix politics with their professional works.

“It delays the court’s operations. So, you will need to stop now or you decide to leave and become politically active. I won’t be taking too many excuses,” Judge Kontoe warned.

According to him, under the creation of rules as mentioned in Article 75 of the Constitution of Liberia, they have set aside city ordinances cases adjudication on every Monday at magisterial courts summarily.

He particularly extolled the citizens for taking advantage of the court to have justice, when aggrieved.

On the issue of the elections, Judge Kontoe underscored the political tensions among politicians; thereby calling on the lawyers including magistrates to exercise wisdom.
“When cases before you border around criminality, after giving you the bond, what will you do? I advise that you use wisdom,” he added.