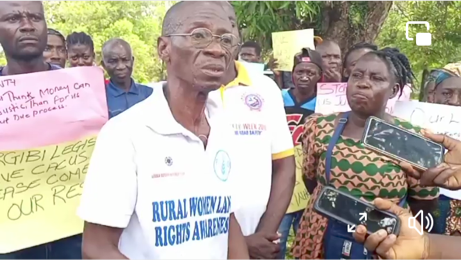 Members of the Kollie-Klee Customary Community in District 4 were seen in their numbers on Tuesday, May 17, 2022, at the Capitol Building with placards in their hands.

Presenting the petition to the Secretary of the Margibi Legislative Caucus, Mr. Alfa Jones, members of the Kollie-Klee Customary Community said that the indigenous people, including the elderly, men, women, children, and the disadvantaged of District 4 community have endured long-suffering and human rights violations in the hands of one Jenkins Mensco, assisted by Judge Mardea Cheona, including the County Attorney, Deddeh Wilson, in Kakata, Margibi County.

According to them, the lawmakers are aware of the 2018 land right law of which their general signatures are affixed to said instrument, thus recognizing the aspect of customary land provision in the law which Chapter 8 Article 32 A states that “as of the passage of the law, rural communities must self-identify and claim their land with deed or no deed and the community must own their land.”

The aggrieved community dwellers indicated that Chapter 11, Article 46 of the land right law also states that private land ownership under the tribal certificate or deed is recognized in community customary land if only the community can identify and authenticate the same.

According to them, Jenkins Mensco, whose father was given a parcel of land by their forefather in the 1950s, has taken advantage of the situation and is now claiming 1000 acres of land within their customary land and is being supported by the court headed by Judge Mardea.

The aggrieved community dwellers claimed that Mensco, who was supposed to have a tribal certificate to be transformed and signed under a public land sale deed, now has an unregistered deed of 1000 acres of land signed by who is yet to be established, emphasizing that the court has refused to hear their side of the story but used the authority to institute measures against them in favor of Mensco.

However, count one of the petition stated that initially a pretrial conference chaired by the court was held and resolved, at which time the Liberia Land Authority (LLA) came in to conduct an investigative survey, and based upon its report, the court took an informed decision.

Count 2 of the Petition indicated that on the same day of the pretrial conference, two hours later, the court issued a stay order not only on the disputed 1000 acres of land but on the entire 3000 acres of customary community land and ordered the Police Support Unit to beat and drive them away from a place they have resided since birth.

“Our crops were destroyed and our livelihood activities were halted for two months because we were in nearby towns and communities seeking refuge from being arrested or brutalized by the police,” the petition added

Additionally, count three of the petition further stated that the judge issued a writ of arrest for four people with their names clearly spelled out but 14 community dwellers were badly beaten, arrested, and jailed in Kakata, and at the same time, during the process, one of the victims, in the person of Lawrence Yenah, sustained an internal injury, at which time Mensco took him to the hospital for treatment, but up to present he has gone missing.

“The court has refused to follow up on this despite the many outcries from us.” The court has refused to do a formal call of parties and interpret the investigative survey report from the land authority but has rather put it under the table. Our lawyer filed a formal complaint at the Supreme Court and His Honor Associate Justice Yussuf Kaba ruled that everything that was done at the 13th Judicial Circuit Court in Kakata was illegal and said the case should resume under “court of record,” the petition stated.

Meanwhile, count six of the Petition noted that during the November term of court in 2021, Judge Yammie Gbessay replaced Judge Chewowea, at which time he instituted the law to the method and he ordered the hospital where victim Lawrence Yenah was taken to, along with Mensco, 21 days to produce the living body of Lawrence Yenah. Unfortunately, Judge Chewo’s tenures were resumed with the lawlessness against us. “Another writ of arrest is being issued for us on the ground that Mensco has sued us, claiming that we have destroyed his crops and threatened him,” the petition furthered.

Moreover, the aggrieved community dwellers mentioned that the attitude exhibited by some government officials seems to be partial in favor of Mensco, which undermines the implementation of the progressive land rights law that protects the interests of the customary community and may be a precedent to backwardness in the implementation of the progressive land law.

The community dwellers claimed that Judge, Attorney Wilkson, Clan, Chiefs of the District, including the Liberia National Police, Ministry of Justice, and Ministry of Internal Affairs, have committed human rights violations against them and have also been bought by Mensco, emphasizing that this is no time for politics and bureaucracy.

“The people have suffered and are dying in the hands of some government officials with the laws in their pockets and not on the books any longer. We ask that you please step in to help address the situation before it goes off hand,” the petition stated.

For his part, accepting the petition from the aggrieved community dwellers, the Secretary of Margibi Legislative Caucus, Mr. Alfa Jones, thanked the citizens of Margibi County for making their way to the Capitol Building to execute Article 17 of the Constitution.

“Thank you very much that you have come here to petition your lawmakers.” For the record, Margibi in the past had a similar situation. If you can leave Margibi and walk to the Capitol Building to petition your lawmakers, it means that there is a great transformation that our laws in this country are gradually improving and our citizens are exhibiting efforts. Yesterday, you know what happened. A sitting senator of Margibi County was involved in a similar matter and he went to court. At the end of the day, he was found not guilty, but the damage was already done. “Today, Margibians are not going in a similar manner. Rather, when issues of such are confronting them, they use the legal system. If the legal system is slow or maybe they are not satisfied, they use their direct lawmakers. Your coming here today is not in vain. We, as the caucus of Margibi, comprising of 2 senators and 5 representatives, have been mandated to come and receive your petition. We will take it to the caucus and let me say, we will look into this matter in the shortest possible time,” Mr. Jones said.

He therefore encourages them to be patient and non-violent since the matter is already before the legislature. Adding that “this approach is the best medium in addressing any problem, so just as you have been patient, remain patient and nonviolent, we promised to look into the matter and involve all parties for an independent investigation.”