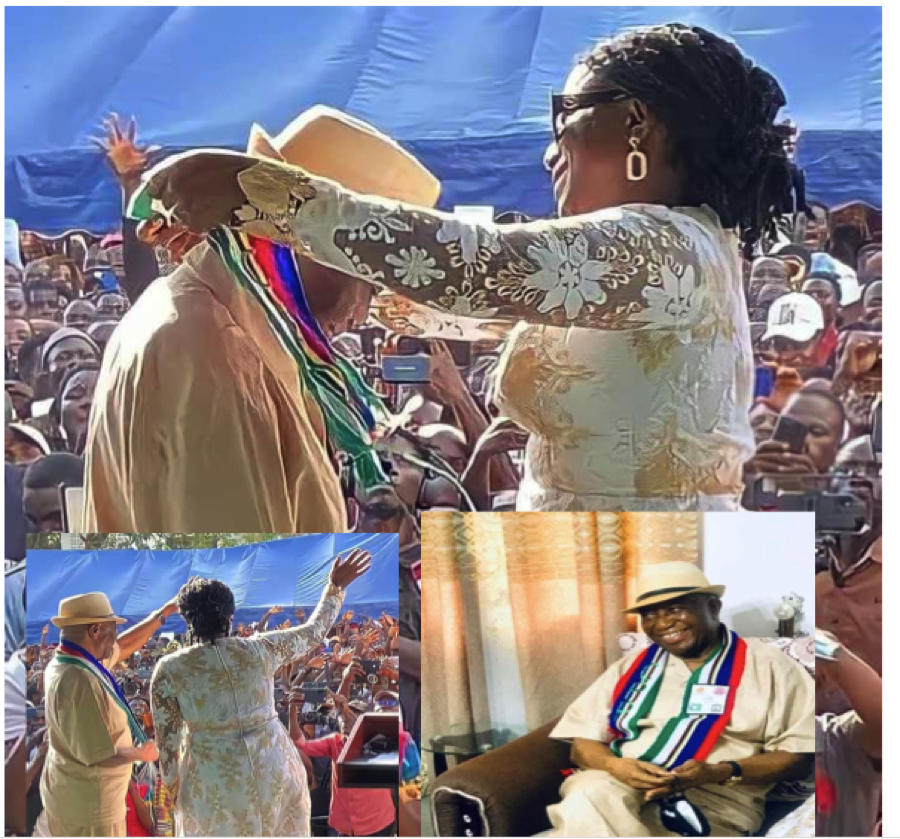 -VP Boakai declares as he takes over CPP’s chairmanship

Former Vice President Joseph Nyuma Boakai has assured Liberians that the Collaborating Political Parties (CPP) will not betray the country despite unrelenting internal wrangling that has engulfed the collaboration for months.

He made the assertions on Friday 15 October 2021, when he officially took over the leadership of CPP, as its chairperson for the next eight months.

“Over the next eight months of our leadership, the CPP will be institutionalized. We will entrench our feet so deep that victory will be the only option. We will not betray our country. Our people have given us their confidence; we will not disappoint them,” he said.

The former ruling Unity Party standard bearer charged President Weah’s administration of being reckless and stubborn to change, stating, “We come to remind you all, our partisans and all well-meaning Liberians, that what we have all set out to do places us all on the threshold of history to cast out the ghost of what is a reckless political, economic and social order that benefits only very few people and has grown increasingly stubborn to change.”

The former VP said no fleeting temptation, no distraction would steer them away from their goals, stating that they are set to win in 2023 and redirect the course of the country’s history. Liberia is poised to go to the polls in 2023, in a general and presidential electoral race.

“On these historic and sacred grounds of the Unity Party and with the guidance of God Almighty, we declare that the Collaborating Political Parties remain strong, united and unwavering.  No fleeting temptation, no distraction will steer us away from our goals. We are set to win in 2023 and redirect the course of our history,” ex-Vice President Boakai added.

However, Ambassador Boakai said in spite of their declaration on May 19, 2020, to their fellow citizens and the world that they were unerringly committed and dedicated to a daring cause so achievable, the past few months have been fraught with difficulties creating anxiety in the public and a sense of implosion within the CPP.

“Fellow Liberians and partisans, the past few months have been fraught with difficulties creating anxiety in the public and a sense of implosion within the CPP,” said Boakai, who indicated that “We recognize these challenges, which have occasioned internal wrangling and a distasteful impression. However, we implore you to not allow differences and internal wrangling to define the CPP, no matter how contentious they have become. This is because social, economic or political conflicts are events that can be transformed into good. We must also see the positives in our differences, as these disagreements and healthy exchanges are the labor pains of the collaboration. Just as a mother experiences discomfort in childbirth but finds joy at the sight of her newborn baby, so also will our differences be transformed into unity and a common purpose in changing our country for the good of all.”

The Unity Party political leader then reassured Liberians wherever they are in the world that the collaboration would be strong after the storm, and said the CPP would continue to demonstrate its purpose in pursuing the path of providing alternative and responsible leadership for the people of Liberia.

“We have also come to let you know that we are united and determined to move forward together as an alliance, joining with millions of other Liberians across this country and the Diaspora to break the cycle of abject poverty, impunity, illiteracy, disease, social injustice, dictatorship, corruption and other challenges that haunt the present, and most profoundly the future,” he pointed out.

He continued: “Today, our country is confronted by some of the most vexing issues of the post war years, as poor governance and failed leadership; marginalization of the majority of Liberians, inequity, and institutional failure have caused low public trust in the government and its institutions. Much of the progress made in the recent past including the execution of a reformed agenda has eroded. The economy is not healthy and not performing for the people as it should be. Productivity is at an all-time low and cost of living high; with price of food and other basic commodities going up, causing most Liberians to fall into poverty.”

VP Boakai said majority of Liberians, especially the youth, are unemployed, exposed to drugs, make no income and live in poor and unacceptable conditions, stating that poor fiscal decisions including consistent off-budget spending on nonproductive and vanity projects are causing strain and decline in significant areas such as education and health.

“As much as the country is endowed with natural resources, its citizens including many in communities hosting concessions are hardly benefiting, causing unwarranted tensions and hanging on the precipice of communal conflicts and insecurity,” he emphasized, indicating, “The security situation is dire and rapidly deteriorating. Many of our citizens and residents live in constant fear, particularly, as a result of the unresolved spate of violence and killings in the past two years. This has unraveled the state of the current security apparatus, revealing the bare threads of a security sector largely aimed at protecting only public officials and leaving millions of citizens and residents to their own devices.

The UP political leader noted that all these problems are undergirded by public corruption; the scale of which he said is yet to be confronted by the George Weah-led government in ways that hold public officials to account.

“We must liberate our people from the bondage of failed leadership: A winning soccer icon whose presidency sees our pitch banned by FIFA and our team as an underdog. The one success that brought you to prominence has become a national failure under your leadership. Missing persons, missing parts, armed robbery and general insecurity is now the Liberian Character. This must change and we must concentrate on a vision that will take Liberians from this bondage to new heights of progress,” former VP Boakai averred.

Ambassador Boakai is of the belief that the CDC-led government unfit to ably execute the task of governance, saying, “It is often said, “Don’t give boys men job to do.” Leave an entertainer to entertain for “while Rome burns the Boy King entertains his guests with a musical harp.” While Liberia burns, the Boy King encourages the building of statutes and monuments in his name while he is alive. Demands that his followers worship him. Exudes an unrealistic lifestyle while poverty consumes our people in the “dirtiest city in Africa.” Malnutrition rages while he plays music and dance to musical cheers.”

The newly inducted chairperson of the CPP accused President Weah of entertaining his guests at lavish undertakings while illiteracy and drugs maim Liberian children and according to him, the country burns and its people die.

“He builds lavish and luxury homes in one year while his entire party takes the life time of his regime to finish a vocational training center on its party premises. A change betrayed!” Former VP Boakai said.

The CPP through chairman Boakai said it understands the plight of the people of Liberia whether they are in Monrovia, Saclepea, Tuzon, Sasstown and every village and hamlet in this country.

“We, the CPP, understand the pains of our mothers who work in sweltering heat on the farm or in the market, and yet barely make it while some public officials steal the national coffers. We understand the frustration of students who toil in school and cannot find a job upon graduation.

The CPP understands the disappointment of the father who works hard all day but can barely get enough to buy a bag of rice to feed his family. The CPP also understands the fading hope of Yana boys, “auction girls” and the many street traders struggling to make ends meet,” the CPP chairman added.

Ex-VP Boakai said a new day for the CPP has dawned, intoning that they must put differences behind and forge ahead by bringing their strengths – and frankly their weaknesses, too – together in the true spirit of the framework to fulfill the aspiration and hope of the Liberian people.

“We must hold together and build alliances with the different layers of our society in transforming our country for the good of the people and the sub-region. We present ourselves as the alternative to a dispensation that is in free fall,” he asserted, adding, “In this direction, I also offer myself as a interculator in addressing unresolved issues and other problems, and, here now, admonish my colleagues Alex, Benoni and Nyonblee to see the bigger picture – the People of Liberia; and exhaust our internal processes of conflict resolution in absolute respect for each other. The CPP will hold itself to the strict adherence to its rules.”

The UP strong man however, took responsibility of the internal wrangling in the CPP, stating, “Without any defense and justification, I accept full responsibility for all the tethering issues of today. My eloquent silence in the face of these internal wrangling and exchanges strengthens my courage to know that mere defending our individual positions without a deep sense of collectivity only make us weaker. Where others see breakdowns, we see an opportunity to build and become stronger, where others see despair, we offer hope and in the face of what appears to be division, we will work with our colleagues to unite.”

Joe Boakai said, “The irreversible momentum of the Liberian People garnered on December 8, 2020 mandated us to stay together, develop a vision that will offer new hope, fresh ideas and freedom from unchecked corruption, induced divisions, unrepentant looting and pillage of our national coffers. We know too well that the excitement and enthusiasm of our people has stimulated a renewed sense of enthusiasm in all of us, and sometimes the temptation becomes so evident that the healthy exchange of ideas, disagreements can lead to apathy, discouragement and despair, but we come today to reassure all Liberians that this is over.  The ruling establishment trembles at the roar of the Liberian People for an alternative.”

CPP for the better part of the last three months has been rocked by accusations and counteraccusations of the altering of its framework document.

At the leadership turnover ceremony, the absence of the political leader of the Alternative National Congress (ANC) Mr. Alexander B. Cummings and Chairman Musa Bility of the Liberty (LP), two of the constituent parties, was very conspicuous.

What difference Ambassador Boakai’s leadership brings to the table is anyone’s guess.