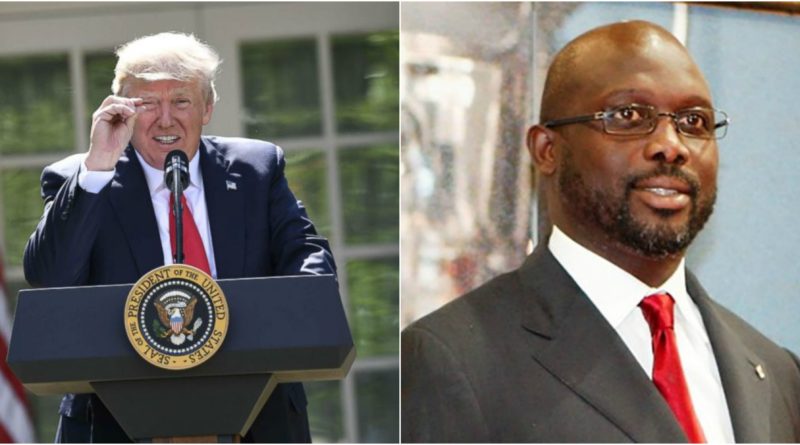 -Trump tightens screw on Liberians’ chances to visit the US

WASHINGTON – President Donald Trump of the United States of America on Monday, issued a new temporary rule that could require tourist and business travelers from two dozen countries, most in Africa, including Liberia to pay a bond of as much as $15,000 to visit the United States.

The U.S. State Department said the temporary final rule, which takes effect Dec. 24 and runs through June 24, targets countries whose nationals have higher rates of overstaying B-2 visas for tourists and B-1 visas for business travelers. The Trump administration said the six-month pilot program aims to test the feasibility of collecting such bonds and will serve as a diplomatic deterrence to overstaying the visas.

Trump, who lost a re-election bid earlier this month, made restricting immigration a central part of his four-year term in office. President-elect Joe Biden, a Democrat, has pledged to reverse many of the Republican president’s immigration policies, but untangling hundreds of changes could take months or years.

Biden’s transition team did not immediately respond to a request for comment related to the visa bond requirement.

Twenty-four countries meet that criteria, including 15 African countries. While those nations had higher rates of overstays, they sent relatively few travelers to the United States.

Historically, U.S. consular officers have been discouraged from requiring travelers to the United States to post a bond, with State Department guidance saying processing of the bonds would be “cumbersome,” the temporary rule said.

Countries whose tourist and business travelers could be subject to the bond requirement include those from Democratic Republic of Congo, Liberia, Sudan, Chad, Angola, Burundi, Djibouti and Eritrea. Other countries include Afghanistan, Bhutan, Iran, Syria, Laos and Yemen.

It may be recalled,earlier this months the Trump administration warned qualified Liberian immigrants that they have only until Dec. 20 to apply for green cards through federal legislation that nears expiration, immigrant advocacy leaders and elected officials said.

The Mayor’s Office of Immigrant Affairs hosted a media roundtable and virtual town hall Wednesday with elected officials and advocates, informing New Yorkers and the Liberian community about the Liberian Refugee Immigration Fairness (LRIF) provision and its upcoming deadline.

Congress passed an act on Dec. 20, 2019, that included LRIF, which allows qualified Liberian nationals, their spouses, unmarried children under 21 years old, and unmarried sons and daughters 21 years old or older and living in the United States to apply for lawful permanent resident status, according to the U.S. Citizenship and Immigration Services.

Although LRIF can help thousands of Liberians gain permanent residence status, only 2,300 people have applied to the program nationwide. Factors affecting the application process are COVID-19, economic struggles, expired paperwork, lack of knowledge of the program, and skepticism/fear in the Liberian community, immigrant supporters say.

Any Liberian national who has continuously lived in the United States from Nov. 20, 2014, to the date of filing their application may qualify. It is recommended that they consult a trustworthy legal representative to inquire about qualification.

As of now, there is no foreseeable extension for the program. However, many officials and advocates are trying to extend LRIF to make sure everyone eligible applies for the program.

“We are committed to working alongside our peer cities and community partners to ensure that every eligible Liberian has access to the information and resources they need to apply for LRIF and are given a fair shot to complete an application,” said Bitta Mostofi, commissioner of New York City’s Mayor’s Office of Immigrant Affairs.

“We, once again, applaud the passage of this legislation by Congress and the creation of this pathway to residency for our Liberian communities. Today, we urge delegates to recognize the immense economic and health challenges presented by COVID-19 for this community to avail itself of this relief. Congress must take action and extend a fair deadline for this much-needed program.”

“Because this bill is going to expire soon and Staten Island has the biggest population of Liberian immigrants in the United States, we are trying to canvass and do as much outreach as possible to make sure every Liberian immigrant takes advantage of this opportunity to get their legal permanent status,’’ said Ateea Kazi, Mayor’s Office of Immigrant Affairs organizer.

“At the time, this is the one way it is guaranteed for them, and we do not know if this will be extended at the end of the year. We want everyone to take advantage while there is still time.”

Meanwhile, On Friday, various sources told The Hill that members of the Trump Administration have been discussing the issue with increasing frequency. They are hoping to push the President into taking action before Joe Biden is sworn in on January 20.

Under current law, all babies born in United States are automatically granted citizenship, regardless of whether or not their parents are American. An executive order signed by President Trump would likely put an end to such legal protections.

The Trump Administrations declined to comment specifically on the issue when approached by The Hill.

Instead, White House Deputy Press Secretary Judd Deere issued a statement saying: ‘Since taking office, President Trump has never shied away from using his lawful executive authority to advance bold policies and fulfill the promises he made to the American people.’

Some constitutional scholars say any executive order Trump signs on the issue would not hold up under the law. They argue that birthright citizenship is protected under the 14th Amendment.

However, the courts have not definitively ruled on the issue.

A legal challenge would almost certainly follow any executive order signed by the President.
According to The Hill: ‘The Department of Justice has been consulted about a possible birthright citizenship order given that it would have deal with the legal implications of any new policy.’

The President has previously discussed ending birthright citizenship, claiming that he can indeed enforce the action without an amendment.

‘It was always told to me that you needed a constitutional amendment. Guess what? You don’t,’ Trump told Axios back in 2018.

Trump told that publication at the time that he had been talking about it with his White House counsel.
Since the adoption of the Fourteenth Amendment back in 1868, citizenship of people born in the United States has been controlled by its Citizenship Clause.

Thus, all babies born in the United States are automatically granted American citizenship, regardless of the legal status of their parents.

Critics of birthright citizenship oppose the fact that illegal immigrants and visitors to the United States can give birth to children who automatically have American citizenship rights.

Such children are sometimes offensively referred to as ‘anchor babies’.

A 2016 report in The Los Angeles Times described the phenomenon of ‘birth tourism from China’. According to the report, many wealthy Chinese citizens fly into the United States to give birth. This means that their children automatically become US citizens, making the process of applying to top American colleges easier in the future.

‘There is nothing in the law that makes it illegal for pregnant women to enter the United States,’ a spokeswoman for U.S. Immigration and Customs Enforcement told the paper at the time.

Children born in Australia, New Zealand and all countries across Europe do not automatically attain citizenship.

Despite having years to sign executive orders and create policy, the Trump Administration appears to be in a mad dash to push through bold initiatives before Joe Biden is sworn in as the nation’s 46th President.
According to The Hill, the Administration wants to pass additional reforms to the H-1B visa program and new measures targeting China.

The Justice Department says it is scheduling the executions of Alfred Bourgeois for December 11, Cory Johnson for January 14, and Dustin Higgs for January 15.

The last of those executions will take place less than a week before Biden takes office.
The President-elect has vowed to end federal executions and incentivize states to also stop capital punishment.