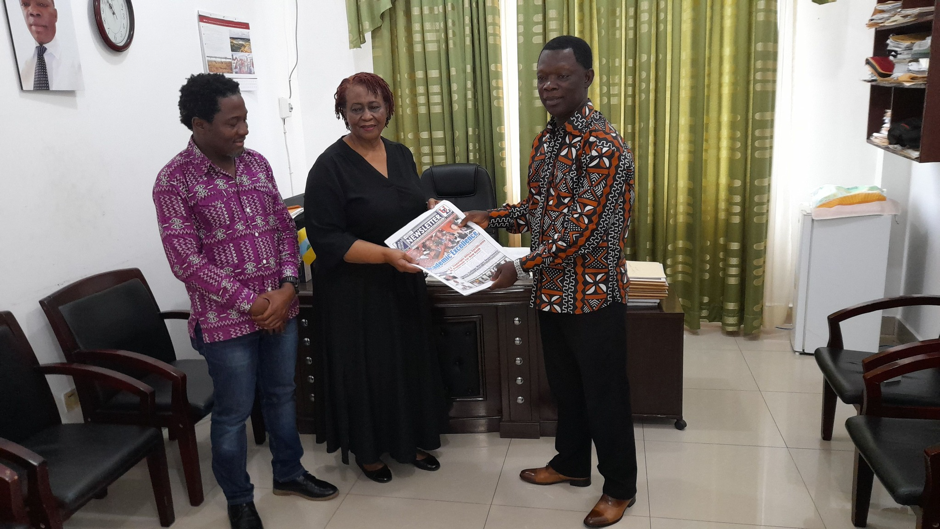 On Wednesday, May 25, 2022, a high-powered delegation from the family of fallen Liberian statesman and political scientist, Prof. Dr. Amos C. Sawyer, led by Mrs. Comfort Sawyer, paid a courtesy call on Prof. Dr. Josephus M. Gray, Dean of the Prof. Amos C. Sawyer College of Social Sciences and Humanities, University of Liberia, at his Fendall office. Mrs. Sawyer conveyed her family’s gratitude to the university’s administration, faculty, staff, and students for designating Liberia College in honor of her husband. For the Sawyer family, she regarded the gesture as a huge honor. Mr. Ibrahain Nyei, a family member, accompanied her.

Prof. Dr. Sawyer devoted himself to the University of Liberia and made significant achievements. He was President of Liberia, Dean of Liberia College, and Professor of Political Science at the Department of Political Science. Dr. Sawyer’s contributions as a dean and lecturer at the institution had a significant impact on Liberian youth and foreign people, shifting and molding their thinking. He was one of Liberia’s brightest and most intellectual brains, and he is credited with the country’s democratization.

Dr. Gray said the visit was a wonderful honor and much appreciated on behalf of the university’s President, Prof. Dr. Julius Julukon Sarwolo Nelson, Jr., Vice President for Academic Affairs, Prof. Dr. Moses M. Zinnah, and the university’s faculty, staff, and students. “Our hearts ache at the loss of Dr. Sawyer, and as we honor his life and legacy, we, the UL family, send our thoughts to the whole Sawyer family,” Dr. Gray said. Dr. Sawyer’s life, he continued, exemplifies the idea that public service is both honorable and enjoyable.

Despite the sadness, Dr. Gray expressed gratitude to the Sawyer family for taking time out of their busy schedules to visit the university’s campuses to thank Dr. Nelson and the entire UL family. He told Dr. Sawyer’s widow that the college would prefer to retain the Sawyer family’s close links and relationship. “The UL family is very saddened and saddened by the death of our former professor, dean, and president,” Dr. Gray stated. “As we mourn, we give thanks to God for Dr. Sawyer’s tremendous accomplishments.”

He offered the college’s heartfelt condolences to Dr. Sawyer’s widow, children, and the rest of the Sawyer family on their loss. Dr. Gray reminded Mrs. Sawyer that Dr. Sawyer led the Liberian country to peace through sound judgment and leadership. Dr. Sawyer created the framework for good government and democracy as a professor, and he remained humble until his death. Dr. Sawyer, he says, will be remembered for his commitment to his family, state, people, education, democracy, and government, notably at the University of Liberia. Dr. Sawyer’s works, he said, will inspire future Liberians to pursue quality education, patriotism, and a higher cause.

Mrs. Sawyer complimented Dr. Gray for the warm welcome and civility extended to the Sawyer family on the university’s Fendall Campus during her conversations with the Dean of Sawyer College. Mrs. Comfort Sawyer notified Prof. Dr. Josephus M. Gray, Dean of the University of Liberia’s Prof. Amos C. Sawyer College of Social Sciences and Humanities, that Dr. Sawyer’s family and friends are overjoyed with the honor bestowed on him by designating Liberia College after him to honor his legacy.

Mrs. Sawyer also informed Dr. Gray that some faculty members at Indiana University, where Dr. Sawyer was a professor for many years, have expressed a desire to take a sabbatical leave to contribute to quality teaching, learning, and research at the University of Liberia, particularly at the Amos C. Sawyer College.

Mrs. Sawyer continued, “The Indiana University will cover the expense of sabbatical leave for its faculty members, but we would be grateful if the administration of UL could offer accommodation.”

Mrs. Sawyer told Dr. Gray that her late husband’s family is contemplating additional vital areas of support, such as international scholarships for Amos C. Sawyer College teachers and students to study at Indiana University. The faculty of Indiana University’s Louse Arthur Grimes School of Law has benefited from similar scholarships thanks to the late husband’s efforts.

Dr. Gray requested the family’s cooperation for the erection of a larger billboard featuring a photo of Dr. Sawyer in front of the Fendall Campus’s new name (Sawyer College). He also asked the Sawyer family for an official photograph of Dr. Sawyer and advised them to consider establishing a local scholarship in Dr. Sawyer’s name for honor and distinction graduates who want to pursue graduate studies at the UL Graduate School in Monrovia or elsewhere.

Mrs. Sawyer and her group were then given a tour of the UL Academic Complex Building, which houses Amos C. Sawyer College as well as the offices of the university’s authorities, chairpersons, and directors. Art and Crafts, Political Sciences, History, Liberian Studies, Social Work, Geography, Sociology, Anthropology, and Criminology, Philosophy and Religious Studies, English and Language Studies, Communication and Media Studies, and LUX FM were among the places visited. The several chairpersons greeted her and her group with open arms.

Mrs. Sawyer briefly chatted with Department of English faculty members who were attending a workshop during the visit, and then interacted with Vice President for Administration, Mrs. Benetta J. Tar, and many directors who were attending a directors’ workshop. She was given a tour of the station’s facilities, including the studio where she and the dean were interviewed, as well as the Fendall UL libraries.

In commemoration of the late Dr. Sawyer, President George Weah, Visiotor of the University, renamed Liberia College of Social Sciences and Humanities as Prof. Amos Claudius Sawyer College at the University of Liberia. This is part of the Liberian Leader’s effort to honor the memory of the late statesman who served as Dean of the College and is credited with democratizing Liberia.

Dr. Sawyer was honored by President Weah for his years of unselfish service to the University as a Professor of Political Science and former Dean of the College. Dr. Sawyer made a significant contribution to the intellectual growth of Liberian youth, molding the minds of many other young Liberians at the university and internationally, according to the citation.