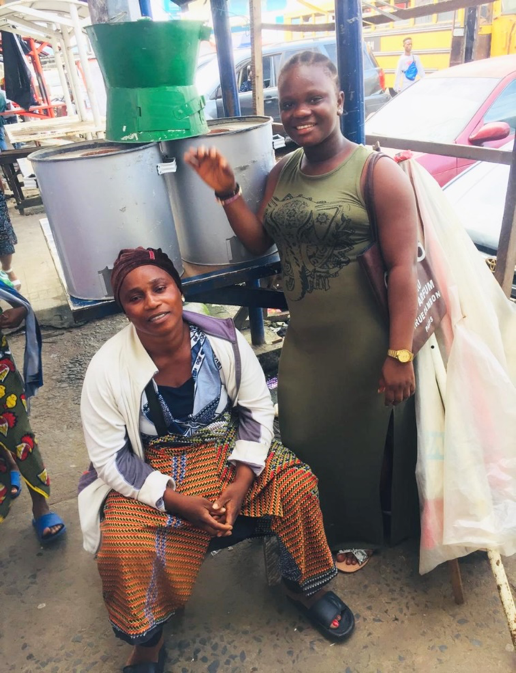 She has sold over 120 eco-cookstoves from her mother’s clothing business at the Waterside General Market in Monrovia.

Famata, a mother of a 3-year-old child, describes how the training has altered her life. She has been able to enroll at the University of Liberia, where she is studying accounting and management thanks to the 10 percent commission she earns on the sale of each cook stove.

“The training was excellent, and I gained a great deal from it. After graduating from high school the previous year, I stayed at home and did nothing. I believe Green Gold took an interest in me, which is why they recruited me as a sales agent. The training has changed my life in that I am no longer as busy. “My small commission helped me pay for my university entrance fees, transportation to and from school, school supplies, and books,” exclaimed Famatta.

She has developed a plan for credit payment. Customers submit requests for the required quantity and agree to pay 100 LRD per day toward the credit. Daily, Famatta receives 4-6 of these requests.

She also attracts customers through a market-based sensitization campaign on the benefits of energy-efficient cookstoves, which, according to Famatta, also serves as a feedback mechanism on the stove’s use by customers who purchase and employ it.

This method has not only been successful in attracting and encouraging more customers to purchase and use the stoves, but also in reducing the high costs associated with the purchase of regular coal for cooking.

Morris Dougba, general manager of Green Gold Liberia, praised the support from UNDP and its partners and pledged to remain committed to the program’s full implementation.

“This young woman, who recently enrolled at the University of Liberia, has broken our record as the highest distributor or sales agent of our eco stoves. “This is possible, in my opinion, due to her enthusiasm for the job and her desire to become financially independent “said Dougba.

Through its Energy and Environment (E&E) Programme, the United Nations Development Programme (UNDP) collaborates with the Environmental Protection Agency (EPA) and other partners to support vulnerable coastal communities through training in the production of energy-efficient cook stoves.

Famatta was part of the first group of forty women ambassadors trained in the production of the first set of over 400 energy-efficient cookstoves and eventually became a sales agent after being encouraged to participate.

It is also essential for the successful implementation of Liberia’s Nationally Determined Contributions (NDCs), which include the production of 300,000 eco-stoves or energy-efficient cookstoves by 2030 as one of their targets.

It is part of the effort to combat rising greenhouse gas (GHG) emissions. The use of traditional cookstoves has negative effects on the health and well-being of low-income families, as well as on the natural environment, as the cutting down of trees for firewood and charcoal causes deforestation and an increase in greenhouse gas emissions.

The use of energy-efficient cookstoves reduces the amount of wood and/or charcoal used for cooking and heating, creating a safer and healthier cooking environment with less smoke that irritates the eyes and lungs.

Charcoal and firewood are the primary energy sources for cooking and heating for approximately 95% of the Liberian population. Major drivers of deforestation in Liberia are unsustainable production and consumption methods.

Only two percent of the population has access to clean fuels and cooking technologies, according to a World Bank report.

NHA rejects media report over ‘illegally downsizing of over 100 employees’