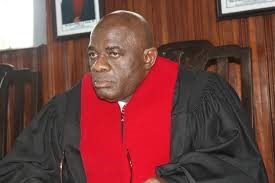 Abuja: The ECOWAS Court of Justice has ordered the Republic of Liberia to reinstate impeached Supreme Court Associate Justice Counsellor Kabineh Muhammad Jan’neh, and pay him the sum USD200, 000 ( two hundred thousand dollars) as reparation for what the court calls moral prejudice Jan’neh suffered for the violation of his rights.

Delivering judgment on Tuesday, 10th November 2020 in a case filed before the Court by Jan’neh, the ECOWAS Court also ordered the George Weah-led government, to restore, calculate and pay to the Applicant all his withheld entitlements, including salaries, allowances and pensions benefits as from the date of his impeachment to the date of notification of the Court’s judgment.

According to information gathered from the ECOWAS Court official website, the Court further ordered Jan’neh’s reinstatement as an Associate Justice of the Supreme Court of Liberia or in the alternative, to grant him the right to retire from service on the date of notification of the judgment of the Court with full pension’s benefits as if he had retired at the normal retirement age for justices of the Supreme Court.

In the 73-page judgment, a panel of three judges of the Court led by Honorable Justice Edward Amoako Asante said the Court found the matter admissible and within its Jurisdiction contrary to the argument of the government, stating that it has clearly established violation of the Applicant`s right to fair hearing and right to work.

The Applicant’s allegation of bias against the Chief Justice of Liberia, who presided over the impeachment trial at the Liberian Senate was however, dismissed by the Court as unstainable.

In suit no: ECW/CCJ/APP/33/19, the Applicant through his Counsel, Mr. Femi Falana , leading six other lawyers, alleged that the processes leading to his removal violated his human rights, particularly the right to fair hearing and impartial trial, right to work and dignity of person guaranteed by the African Charter on Human and Peoples rights, the Universal Declaration of Human Rights. Moreover, he claimed that the purported impeachment, trial, conviction, removal from office and replacement violated the Liberian constitution.

The claims of the applicant are berthed on the fact that the Respondent subjected him to impeachment proceedings with no Prescribed Rules of Procedure thereby depriving him of his fundamental right to fair hearing as stipulated in the 1986 Liberian Constitution.

The applicant said that when the impeachment trial commenced at the Liberian Senate on February 13, 2019, he filed a Motion to recuse asking that the Chief Justice should not preside over the Applicant’s impeachment trial since he signed the Judgment of the Supreme Court in a case that was listed as one of grounds for his impeachment

He submitted that allowing the Chief Justice, His Honour Francis Korkor, Sr to preside would be tantamount to a conflict of interest with the possibility of bias as he was involved in several facets of the impeachment proceedings and was expected to recuse himself in order to adhere to the tenets of justice.

The applicant said that to his surprise, the Chief Justice denied his application and instead proceeded to preside over the applicant’s impeachment trial.

The Applicant further submits that under Chapter VII, Article 72 (B) of the 1986 Liberian Constitution, he was guaranteed the holding and protection of office as Associate Justice during good behavior until the age of seventy (70).

He therefore urged the Court to award general damages in an amount not less than twenty-five million United States Dollars US$25,000,000.00 (Twenty Five Million United States Dollars) as compensation and an Order directing the Republic of Liberia to restore the Applicant to his position of Associate Justice of the Supreme Court of Liberia. He also asked the Court to declare that the entire Impeachment trial, conviction and replacement on the Supreme Court constitutes violations of Applicant’s rights to fair hearing, dignity of his person and work under equitable and satisfactory conditions among others

But the Respondent, represented by the Solicitor General, Counsellor Sayma Syrenius Cephus denied violating the human rights of the Applicant and submitted that the impeachment of the Applicant was done through a political process which also followed the due process of law as laid down in Section 43 of the 1986 Constitution of Liberia. The State urged the Court to declare that the application is inadmissible because the Community Court is incompetent to review, interpret and apply the national constitution and domestic laws of Member States.

The Court gave the Republic of Liberia six months to report on the enforcement of the judgment.

Also on the panel for the case are Justices Dupe Atoki and Januaria Costa.