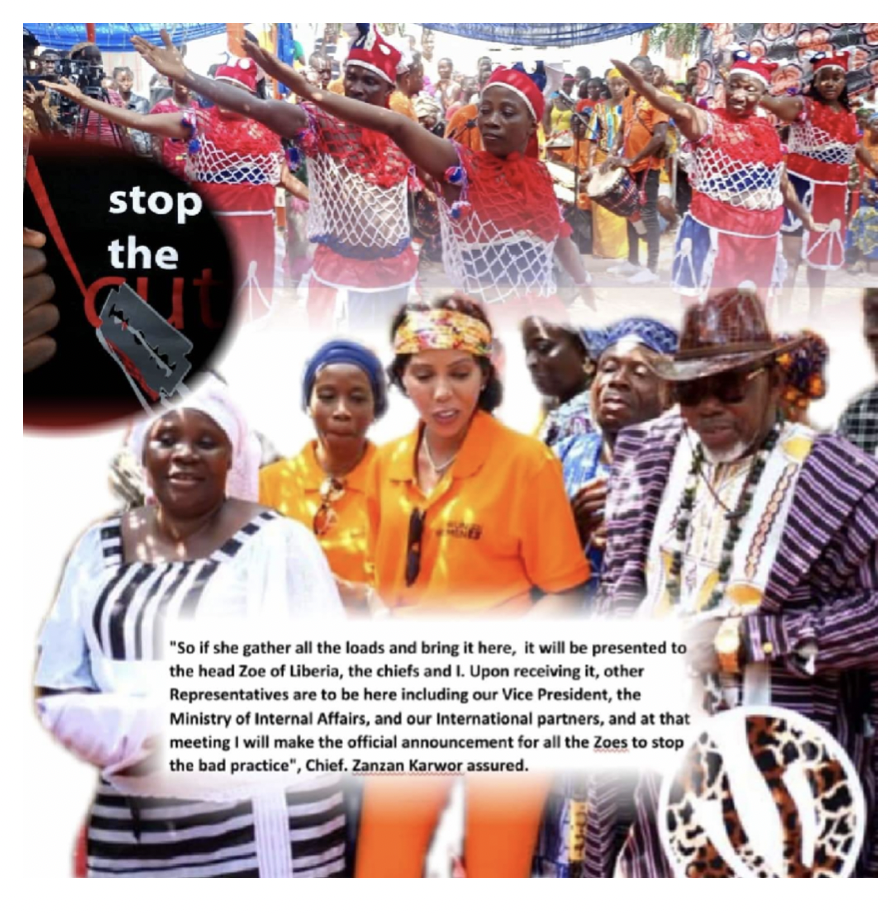 Following the dedication of a heritage and vocational center for traditional women
in Sonkay Town, Todee District, the Head of the Traditional Council of Liberia, Chief
Zanzan Karwor, has instructed the Head Zoe of Montserrado County to gather all
sande-related materials from bushes across the county, along with their respective
Zoes, to commence a new phase of traditional practice at the heritage center.

Speaking at the occasion marking the opening of the heritage center and in
commemoration of the official launch of the 16 Days of Activism on Friday,
November 25, 2022, Chief Zanzan Karwor authorized the head of Zoe to make the

various materials available in the coming weeks, noting that the official declaration
will be made on Saturday, Sonkay Town, Todee District, Montserrado County,
January 7, 2023.

“You people have finished; we are coming to turn it over; all the loads here in
Montserrado County, collect them all; the instruction is from me, so inform all the
Zoes that are under your control, gather all the loads, and bring them here,”  he
instructed.
.
He continues, “So if she gathers all the loads and brings them here, they will be
presented to the head Zoe of Liberia, the chiefs, and me.” Upon receiving it, other
representatives are to be here, including our vice president, the ministry of internal
affairs, and our international partners, and at that meeting I will make the official
announcement for all the Zoes to stop the bad practice.

He encouraged the UN Women and the government of Liberia to make some
materials available to give to the traditional women as an expression of
appreciation, as they will all assemble at the new facility in Todee to officially turn
over the different materials and start a new form of traditional practice.

“But UN Women look for cows,  rice, oil, and other things to give to our traditional
women, because when they give me the loads and I give the instruction, whenever
you return here, you will never see anyone doing the bad practice, so that’s the
procedure,”  he stated.

Prior to Chief Zanzan Karwor’s authorization, the UN Women Goodwill Ambassador
for Africa on FGM and Child Marriage, Ms. Jaha Dukureh, urged the women to
genuinely desist from the harmful practice and avoid making requests before doing
the needful.

As one who experienced both FGM and child marriage, Ms. Jaha Dukureh
admonished the traditional women to see her as one of them and stop the
mutilation aspect, noting that it’s unsafe for girls.

She promised to construct a factory in Liberia, as well as make other major
investments, if the traditional women are willing to stop the mutilation aspect of the
Liberian tradition.

Meanwhile, the head Zoes from Grand Cape Mount, Bomi, and Montserrado, as well
as the head Muslim Zoe, made a commitment to halt the mutilation aspect of the
Sande society.

They assured to shut down the bush schools, but further called on the UN Women
and the Liberian government to ensure that they are empowered or employed.

The Sonkay Town Heritage Center is one of four vocational and heritage centers
established by UN Women under the framework of the European Union and United
Nations Spotlight Initiative. The four centers are expected to provide alternative
economic livelihood programs to former traditional practitioners of FGM in Liberia.

Moreover, the mandate from Chief Zanzan Karwor and efforts from the UN Women
and other international partners are part of a commitment to ensuring an end to the
dreadful practice of the Tibetan tradition, which has been displayed through female
genital mutilation (FGM).

In Liberia and other parts of Africa, the practice is attributed to traditional belief and
sometimes religion. It is practiced in eleven (11) out of the five (15) counties in
Liberia.

The practice has no health benefits for girls and women, as it can also cause severe
bleeding, problems urinating, and infections, as well as complications in childbirth
and an increased risk of newborn deaths.

Howbeit, Liberia remains one of the three West African countries that do not have a
law criminalizing FGM despite having signed and ratified regional and international
human rights instruments condemning the practice as a human rights violation,
including the Maputo Protocol.

In February 2022, the National Council of Chiefs and Elders of Liberia, in
collaboration with the Government of Liberia, proclaimed a three-year ban on the
practice of FGM from 2022 to 2025, but over the past few months, there have also
been stories of forceful initiation into the Sande society where FGM is practiced.