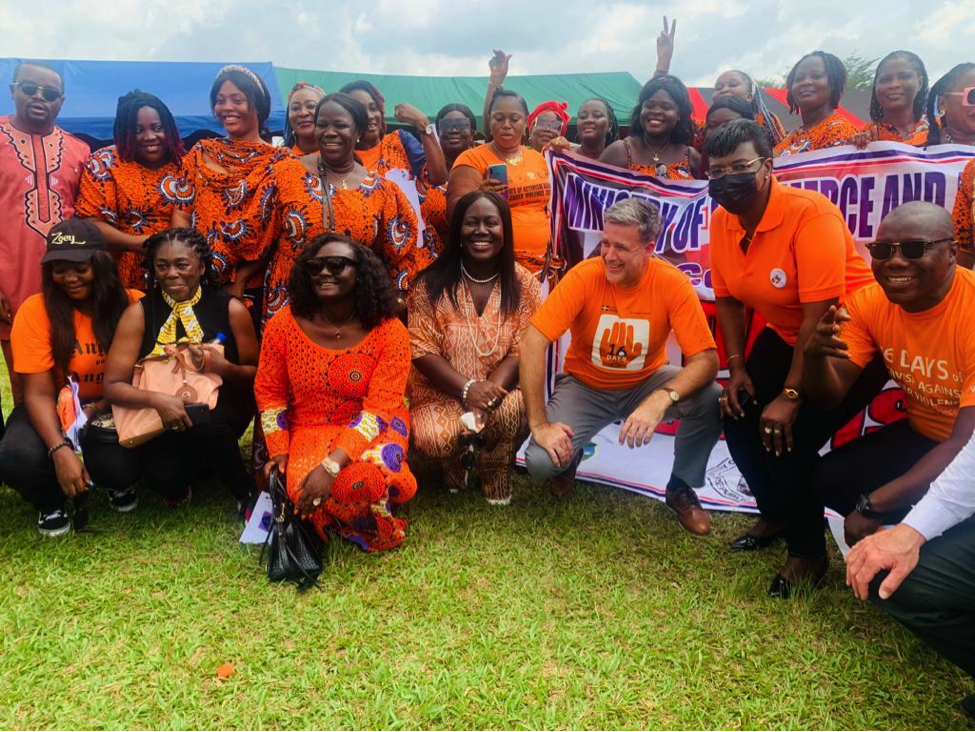 Liberia, on Thursday, November 25, 2021 joined the rest of the world in observance of the official launch of the 16–Days of Activism against Gender-Based Violence, with resounding calls that the citizenry once again muster the tenacity to act now, act together and immediately put an end to the threat of gender-based violence.

The 16-Days of Activism Against Gender-Based Violence is an international campaign that commemorated annually to reinforce, elevate and collaborate efforts intended to END ALL FORMS of VIOLENCE AGAINST WOMEN AND GIRLS. The campaign runs every year from 25th November, marking the International Day for the Elimination of Violence against Women; to 10th December, International Human Rights Day.

This year, the 16-Days’ campaign is being observed under a global theme: “End Violence Against Women Now!”

Liberia is commemorating the 16-Days under a national theme: “Enough is Enough! Let’s Act Now To End Violence Against Women, Girls, Children and Other Marginalized Groups.”

Delivering the keynote address at the official launch of the 16-Days of Activism held in Kakata, Margibi County, Liberia’s Minister of Commerce and Industry, Mawine G. Diggs, said “it is now time, following 200 years of existence to go beyond workshops and conferences, PowerPoint presentations and email exchanges, speeches and rallies to take firm and concrete actions to end Sexual and Gender-Based Violence against women, girls and marginalized groups.”

“As a nation who has historically led on many fronts, we cannot waiver or lag behind in these fights and efforts as we have always stood as an example for many to follow,” said Diggs, adding, “As we celebrate our upcoming Bicentennial, let us do so keeping in mind that the future of women, girls and marginalized groups of Liberia rest on the decisions we make, the action we take and the goals we set.”

“I want to encourage all the stakeholders in this sector, to continue the good work and do more with education, awareness and outreach in our rural and leeward counties where Sexual and Gender-Based violence remains prevalent,” she indicated.

Earlier, in remarks, Acting Minister of Gender, Children and Social Protection, Hassan Kanneh called the attention of the citizenry to join the campaign and engage every sector ensuring that the inhumane act of violence must end now.

“I urge us all today to not shelter those who perpetrate violence against children and women. We must work together to ensure that women and girls are given equal opportunities as well as boys to go to school and realize their full potential,” the Gender Ministry Acting boss indicated.

Minister Kanneh further warned that there should be no impunity, condoning, tolerating, resignation and compromises or excuses in the fight against violence against women and children.

“Each of you have found your own way to contribute through advocacy, creating of opportunities for women and girls’ education, using different strategies to help identify discrimination, and by setting an example for other young women whose dreams also deserve to come true,” he added.

Acting Minister Kanneh also called for a consolidated effort to tackle the problem, highlighting that gender-based violence is still a major threat to the security of women, girls and boys across Liberia.

“It is not inevitable, it can and must be prevented,” he concluded.

In speech, UN Resident Coordinator, Niels Scott applauded the Government and the people of Liberia, civil society organizations, the media, private sector and other key stakeholders for amplifying their voices and taking appropriate actions in ensuring the protection of women and girls, boys and men from the various forms of violence that continue to creep in the Liberian society unabated.

Mr. Scott acknowledged that while several gains have been made in ending violence against women and girls in Liberia, a lot more still need to be done.

“There is a need to strengthen primary prevention efforts that are transformative in nature and redefine power relations that have often put women and girls in a vulnerable situation at family, community, and institutional levels. Response systems need to be strengthened coupled with timely redress of cases to reduce future crimes of a similar nature,” the UN Resident Coordinator further stated.

In furtherance, Mr. Scott recommitted the UN efforts to support the Government of Liberia in the fight against Gender-Based Violence in schools especially rape, domestic violence, child marriages and FGM, stressing that violence against women and girls, boys and men any and everywhere is a human rights issue and needs serious interventions from both the Government and the international community.

In a joint statement from the embassies of France, Ireland, Germany, Sweden, United Kingdom, United States of America, ECOWAS Commission and the delegation of the European Union, Swedish Ambassador Urban Sjostrom said: “we must act now, we must act together and we must end

Ambassador Sjostrom called for improved data collection to enhance the collective understanding of the demographics of the problem, urging that Liberia invests in evidence-based violence prevention programs such as school-based interventions with community outreach, combining economic empowerment and gender training, and community mobilization to change social norms.

The program was attended by cross section of women and student groups, women representing line ministries and agencies and other local and international He4She partners.

The launch took place at the BWI campus in Kakata, Margibi County following a parade through the principle streets of Kakata.