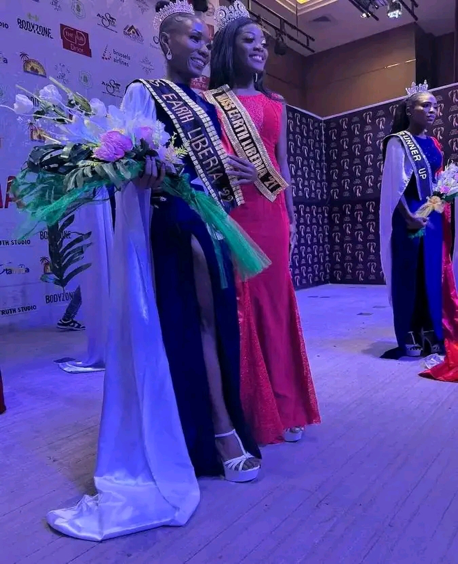 Miss Essiana W. Weah, goddess of the Sun, was crowned the new Miss Earth Liberia on Saturday June 18 at the Ellen Johnson Sirleaf Ministerial Complex. She replaces Miss Odella Kanu Flomo, who held the title in 2021.

The 25-year-old supermodel, a student at Williams VS Tubman University from Southeastern-Liberia, Harper, Maryland County, will compete in the Miss Earth International pageant 2022 later this year in Manila, Philippines.

Miss. Weah defeated at least ten other finalists on the night, including Miss. Promise W. Toe-god of Time, who finished as first runner-up, Miss. Leona Perfect Duweh-god of Heritage, second runner-up, and Miss. Reneta B. Crayton-god of fire and Gabrielyn G. Farngalo-god of rainbow, who rounded out the top five contestants as she clinched the title of Miss Earth Liberia. Other finalists that took part in the colorful event included Ms. Malai A.G. Senwah-goddess of Flower, Miss. Gabrielyn B. Kamara-goddess of Tears, Miss. Stephanie K. Wreh-goddess of Light, Miss. Elizabeth S. Morlu-goddess of Star, and Miss. Gabrielyn B. Kamara-goddess of Tears.

As Her Royal Majesty Ms. Essiana W. Weah-Goddess of the Sun, she will have the opportunity to succeed 26-year-old model and Belizean Novelist Destiny Evelyn Wagner, current titleholder and 2021 winner of the Miss Earth International competition, as she gains her first international exposure.

Miss Liberia 2017 addressed to the attendees about the event with excitement and passion. She then praised the Environmental Protection Agency (EPA) for continuing to assist with the event. “The Miss Earth Liberia contest is all about the environment and oriented towards training the minds of young women to combat climate change at the grassroots level,” she stated. Miss Earth Liberia contest organizer La Queen Entertainment added in a statement.

Randall Dobayou, deputy director of the Environmental Protection Agency (EPA), for his part, has confirmed the EPA’s continued support for the Miss Earth Liberia Pageant. Mr. Dobayou stated that the EPA will continue to collaborate with La Queen Entertainment because their pageantry approach is oriented on promoting the environment and preaching the message of climate change.

He stated that the EPA is committed to ensuring that the winner of the Miss Earth Liberia Pageantry becomes an Ambassador of Climate Change for the Environmental Protection Agency (EPA) and suddenly represents the country outside. Something he said will assist expose and educate young Liberian models about the issue of climate change and the need to solve it.

“As is customary, the EPA remains a devoted collaborator with La Queen Entertainment in order to promote the ideas of climate change. This will allow our young ladies to travel and become more aware of climate change,” he says.

As promised, it was a great occasion, with all of the participants camped out for a week at the Royal Grand Hotel in Sinkor, Liberia, owned by Nollywood star Eddie Samuel Obong Watson Jr., who served as the anchor.

The topic of this year’s pageant was “Liberia’s greener eco warriors,” and roughly 30 lovely ladies competed in the preliminary rounds, with 10 charming goddess finalists contending for the prestigious crown.

In terms of awards, La Queen Entertainment, in collaboration with the Environmental Protection Agency (EPA), will award the winner a brand-new sedan automobile, a cash prize of US $1,000, and various endorsement contracts. The first runner-up would win US $700, while the second runner-up would receive US $500.00 and a one-year management contract with La Queen Entertainment.

Miss Earth Liberia is the official title of Liberia’s delegate to the Miss Earth contest. The pageant is primarily concerned with promoting environmental causes, and winners are picked based on both their personal appearance and their comprehension and knowledge of environmental issues. La Queen Entertainment is organizing this event.

Who is La Queen Entertainment?

La Queen Entertainment was created in 2018 as a non-political, non-religious, non-ethnic, and non-factional business for talent discovery. They are the principal organizers of the Miss Earth Liberia contest, which is supported by the Environmental Protection Agency (EPA).

We will not forget about you”