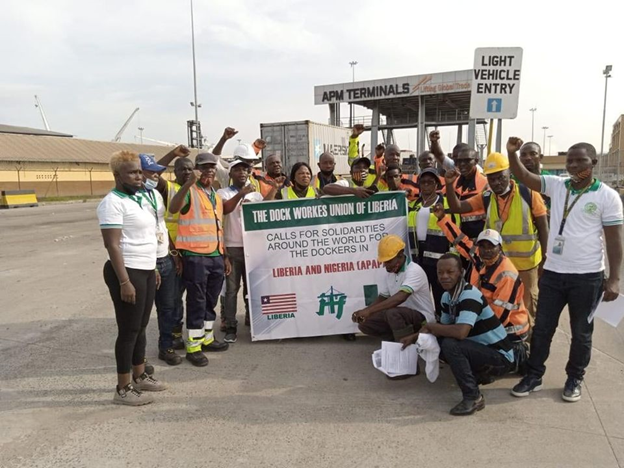 For more than a week now, hundreds of aggrieved workers at the National Port Authority (NPA) have been protesting against bad labor practices. The chief culprit of these anti-labor precedents is APM Terminals.

Voices from Exile (VEx), a pro-democracy and pro-rights advocacy platform, remains very concerned about this ongoing impasse at NPA. VEx stands in firm solidarity with Liberian workers and calls on APM Terminals to refrain from continuous labor abuse.

We are standing with these workers’ unions and we are in full support of their demands/plights which are legitimate and reasonable to be met:

The National Port Authority (NPA) and APM Terminals MUST be very sensitive, proactive, and responsive to the plights of these aggrieved workers. The concerns that have been raised are genuine and they deserve timely redress.

Furthermore, VEx is demanding an immediate reinstatement of 24 suspended employees by APM Terminals. The rights of those suspended dock workers were flagrantly violated and we call for an end to illegal suspension and arbitrary dismissal throughout Liberia. The Rule of Law must prevail at all times.

If these 24 suspended workers are not reinstated as soon as possible, VEx will be compelled to mobilize thousands of students, youths, teachers, marketers, and ordinary Liberians through a nonstop protest until such reinstatement is done.

APM Terminals is not above the Labor Law of Liberia and we will not allow any concession company, not even APM Terminals, to exploit/abuse our people’s labor. Predatory concessionaires MUST be brought in check because labor rights are fundamental to economic growth and development. We are calling for a review of APM Terminals’ concession.

VEx calls on President George M. Weah to use his executive power in order to reasonably relapse taxes on imports. GOL must find remedy(ies) to prevailing complications at the National Port Authority. The compounded difficulties facing Liberian businesses and entrepreneurs are disturbing. We call on GOL to entirely enforce the 1956 Labor Law of Liberia, the 1973 Liberianization Policy, and the 2010 Decent Work Bill. In the coming days, VEx will formally dispatch a communication to the International Labor Organization (ILO) pertinent to bad labor practices throughout Liberia.

“I Will Not Deceive You”