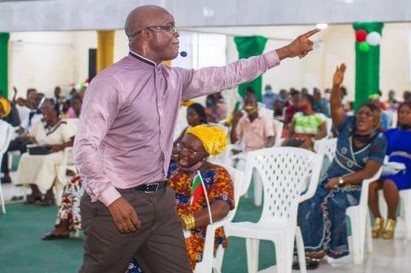 The longtime preacher man, who is known to be vocal on national issues, made the assertion last Friday at the St. Peter’s Lutheran Church in Sinkor, when he delivered the homily at the wake-keeping over the remains of the fallen Director General of the Internal Audit Agency (IAA), Emmanuel Barthan Nyeswa.

Last month, Nyeswa, was found lying unconscious at his SKD Boulevard residence at midnight, reportedly wounded in his head and back, and rushed to the hospital where he later died.

Nyeswa’s death remains cuddled in mystery, but at the time of his demise, speculations were rife that he fell through an emergence door from the top floor of his one-storey building while other reports had it that he may have been attacked by unknown assailants who may have aggressively pushed him from the top floor which is estimated as 30ft from ground level.

Police said at the time and continue to say, they are investigating the cause of death of the deceased IAA boss.

“Fear is in the land,” Reverend Gardea Johnson noted, indicating that under the George-Weah-led government, there are some unidentified individuals roaming the country from house to house killing people, and that such individuals are not being held accountable by anybody, for their murderous actions.

“Don’t tell me that nonsense that we are investigating,” a rather emotionally charged Rev. Gardea Johnson intimated, rhetorically asking, “do you know how many times we have investigated things and we have never arrived at anything to solve the problem?

Rev. Gardea Johnson noted further that four other Liberians including the deceased IAA boss Nyeswa, and three other former employees of the Liberia Revenue Authority (LRA), Gifty Lama, Albert Peters and George Fanboto, all of who died under mysterious circumstances, “were murdered, and more than a month ago, not even a lead” has been established as to unraveling the mystery behind how they were killed and who their killers are.

He attributed the failure to apprehend the killers of these slain Liberian professionals, to the incompetence of some elements within the country’s security sector, emphasizing therefore, the need for such security personnel to be changed.

He reminded the Weah-led government that its first task is to provide security, but indicated that the government is seemingly failing in such task.

“We can’t compromise the security of the state for partisan appointment,” said Rev. Gardea Johnson, reiterating, “they must go, because they don’t know the work.”

On Friday, while signing the book of condolence of the late Nyeswa, President Weah called on Liberians to be conscious about their security, urging that individual citizens purchase CCTV for their personal security, while government concentrates on averting external threats by manning the country’s borders.

“This is unacceptable and this is crazy – it must stop,” emphasized the Baptist preacher, who intoned that the fallen IAA boss was murdered by powerful people whose identities he fell short of disclosing.

He added that Nyeswa’s life was taken by “cruel people,” averring that nobody should put Liberians under the impression that the late IAA boss, who he described as a sensible man, would build his house, detail the design of the house to his architects, and ensured that there was an escape route, come home and open the door to that very escape route and just drop off and die.

He noted that such explanation is unacceptable, saying, “we refuse it. It is not possible.”

Rev. Gardea Johnson, who noted that there is a difference between a nation and a country, defining a country as a geographical land-space, and a nation as a stable community of people formed on the basis of a common language, territory, and history, the radical Man of God disclosed that there are diverse factors that can make a nation great, naming security, good health delivery system, economic empowerment, among others.

In apparent reference to assertions attributed to elements from the ruling Coalition for Democratic Change (CDC) that ‘now was their time’, the tough-talking Baptist preacher added: “It’s more than a group of people that are too selfish – that we have arrived and it is our time.”

He indicated that in a country where the ruling class is too selfish, the nation will not be great, and it’s just a matter of time that the reality of such selfishness will sink in.

“You cannot live in a nation where there are various tribes, there are different groups of people who supposed to be part of the nation [and] you come and you make it appear that it is [only] you and your friends,” Rev. Gardea Johnson emphasized.

He said Liberians and residents of the country are living in fear, informing his audience that if anyone of them were connected to the CDC-led government, now was the time to fix the system, stating, “because if you don’t fix it, it has a way of turning around, illustrating that life is an orbit and it turns.”

“You might be sitting at the head of the table today. It’s just a matter of time, you will soon be at the tail of the table,” said Rev. Gardea Jonson, who informed members of the ruling class that if they were in doubt of his assertions on life being an orbit and that it has a way of turning, they should seek counsel from past leaders who once occupied the very positions they are now occupying.

Meanwhile, the remains of the deceased IAA Director General Nyeswa, was laid to rest on Saturday, at the Kaiser Memorial Lawn Cemetery, Brewerville Township, outside Monrovia.

“Don’t give boys men job to do”