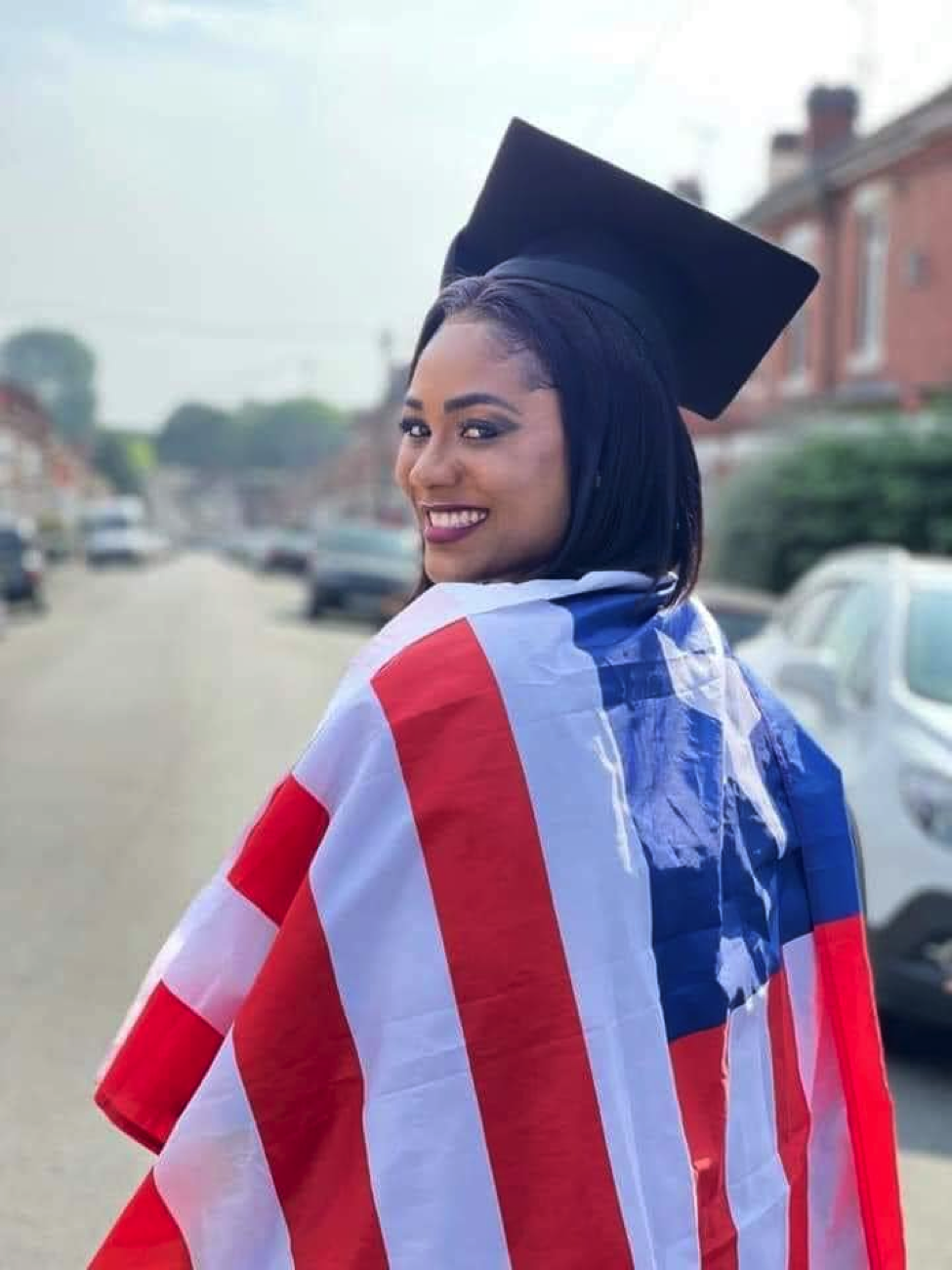 A Liberian female academic, a 2019-2020 Master’s degree graduate of the prestigious UK’s Coventry University, Madam Izetta Jones-Howe, has been reflecting on her difficult journey leading to her academic achievements, with a call for the Government of Liberia (GoL) to provide opportunities for more Liberian women to acquire education.

Madam Jones-Howard, a mother of two, in a recent Women Voices’ interview, recalled how she had to leave the younger of her two girls in the care of her mother, Mrs. Elizabeth Jones (now deceased), when she was just six months old, to have traveled to the United Kingdom in pursuit of a Master’s in Project Management.

“I was determined to get my degree and I developed the interest to go and do Project Management. I chose to just go to the UK and acquire a Master’s in Project Management, because I saw Project Management as a good and challenging field at this point,” said Madam Jones-Howard, who has been married to her husband, Mr. George Howe, for three years now.

Jones-Howe told Women Voices that while in the UK, her first thought was a one that she needed to graduate with distinction, something that she had always done in her educational sojourn.

She narrated that due to her urge to do her studies in the UK and come out in flying colors, with distinction as well, she dedicated everything at her disposal to acquiring her Master’s.

“I dedicated my everything to this degree – because like in my class, I was so knowledgeable about Project Management, because you know I did it at LIPA so I had edge, plus my reading skills,” she said, adding that she met people and made friends from diverse backgrounds.

Unfortunately, she narrated that while pursuing her studies in the UK, and she was constrained to have prematurely left the United Kingdom in June of 2019, on the first flight that landed in Liberia.

Jones recalled that one challenging moment in her pursuit to acquiring her Master’s was just before writing her dissertation, when she sadly lost her mom, a lady she described as a friend, just

“Before I could start my dissertation, I was in the UK – I lost my mom in America, and I got so, so broken, because it took a serious toil [on me], because she was like a backbone to me,” Jones-Howe lamented.

Howbeit, she added, “Nevertheless, you’ve got to keep pushing. I didn’t give up. I came back to Liberia and did my dissertation online…So I was meeting with my supervisor online, who suggested that I should take deferral, but I said no, because I knew how much enthusiasm I had for that particular course. So, I did my dissertation and I got an ‘A’, plus all my grades that got me to distinction.”

Jones-Howard’s first attempt to attend school in the UK failed, when as a self-supported student, when in 2021, she singlehandedly paid her fees and tuition to enroll at Northampton University, but due to delay in receiving an UK visa, she missed out on the opportunity for enrollment.

She stated that Northampton University then gave her a refund of her fees and tuition, after which she ventured into business; dealing in used cars and other assorted goods, as a way of raising more money to have given another shot at attending a university in the UK, and lo and behold the door to Coventry University opened in 2019.

“So I decided to enroll at Coventry University in the United Kingdom, and I was accepted,” said Jones-Howe, who narrated that with the help of her hubby, she underwrote an extremely expensive cost of enrollment, which include rental payment and fees for maintenance at the British university.

“I’m saying it, it sounds easy, but it hasn’t been easy, it has been a difficult journey, said Jones-Howe, who hailed her mom, hubby and prayer partners, as those that motivated her to have kept her head high.

She also stated that she had to rely on self-motivation, stating, “Me, as a person, I always like to be on the top – and I like to get to the point where I get something that I work for that I am proud of. I don’t like to get it easy, so I like to get the highest – a self-challenge that I am going to be the female that is going to score the highest grade.”

Hear Jones-Howe: “Earnestly, I can say like people praying with me like stuff, I can say in reality, life itself, I had to deal with it on my own – because growing up, I saw my mom never giving up. There were some tough times that she never backed down to. So, seeing that when she even passed, I was like she’s going to be proud when I even push more than to just give up at this point. So, my mom is one person I see as a role model. She was a mom’s figure, she was a friend, and a God-fearing person.

“Despite all the obstacles, I was like you know what; this is the time that I have to do it. I may not have the time if I break down now. So, it’s just prudent that I just forge ahead and do this and whatever situation I have I can still deal with it at a later date,” recalled Jones-Howe, when her mom passed.

People who motivated her:

She attributed her taste for distention to her upbringing, as she recalled growing up in an extremely discipline home, where her dad, Mr. Matthew Jones, a retired soldier in the 60s and 70s insisted on nothing less but discipline, along with her mother, a nurse from what she described as a serious holy background, as a devout Christian – “So, blending those together, I mean, it was a serious discipline which I can boast of today.”

Asked why there is a lesser number of Liberian women aspiring for education, she said there basically lots of factors responsible, naming few as the mindset of certain females who want life easy, many of whom she says always view life as being too difficult, while she observed that many others are just complacent, something she says id preventing such women not to move ahead.

However, in her closing words, she indicated that females are most times labeled, saying, “so, when you are a female and when you are breaking the glass ceiling, it calls attention to you in a positive way. So my words out there to females, we shouldn’t give up. Because me, the first thing me I believe in is you never fail until you stop trying. You’ve got to keep trying because this my story, the first time I failed to have gone to the UK, I could have backed down and don’t try again – but until you try and get a result, you are not a failure. So my words out there to them is, keep trying, we should do away with complacency, because that’s what I see around here. We are very complacent with what we have today, and good things don’t come easily. You have to make sacrifices. I made sacrifice to leave my kids, to leave my husband, but today, here I am, I have a tangible result… So, they just need to be focused, determined and just push forward.”

She observed that in Liberia, there are many females who are desirous of going to school, but lack the opportunity to do so, adding that now was the time the GoL focused more on educating a lot of smart Liberian women, through the provision of scholarships.

“I think the government should focus more on sending people out there to build their capacity – and this has been my thought; if somebody is able to dip from their saving – you know how difficult it is to save in Liberia, but if you can dip from your saving, to be able to send yourself to school, at least when you return, there should be a package for you. Government should be able to cover that cost you paid and you should have a job – because it’s rare, you don’t see people doing it  – everybody waits for scholarship… so government needs to focus on capacity-building – we shouldn’t just say it, but we should do it,” she maintained.