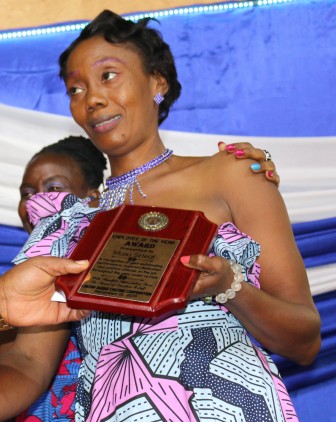 The experienced female broadcaster attained the fete at a glamorous ceremony held at the Paynesville City Hall, outside Monrovia on Tuesday evening.

For her dedicated services rendered the institution over the years, especially the year in review, Sirleaf bagged a cash prize of US$1,000 from the keynote speaker at the event, National Port Authority (NPA), Managing Director Bill Twehway, who congratulated Sirleaf and used the occasion to urge all other public servants to at all times uphold professionalism in the discharge of their duties.

Twehway said public service is characterized by passion, respect for the rule of law, and dedication to the state and its people.

The NPA managing director also urged employers in the country to promote an inclusive work environment for employees to excel.

The management of state radio also paid special tribute to some of its key partners, including SEGAL, the National Fisheries, and Aquaculture Authorities, and Petro Trade, for for what the System’s management team called its partners’ continued support to the state broadcaster.

She disclosed that the entity will also adopt quality programs to impact society.

She praised the collective efforts of employees for exhibiting professionalism, with special emphasis to the country’s just-ended Special Senatorial and Representative By-Elections and the conduct of a National Referendum.

According to her, professionalism continues to elevate and stimulate the entity’s status for public recognition.