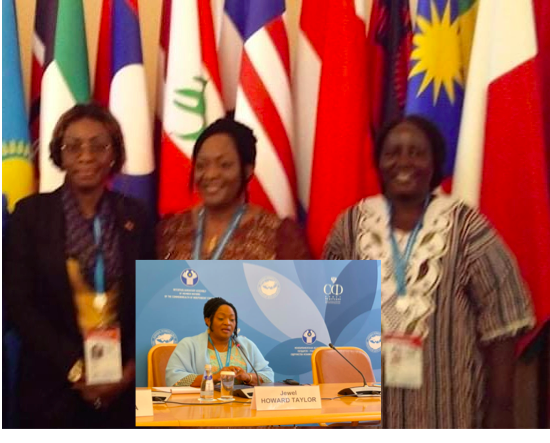 Representative Ellen Attoh-Wreh of District #3 in Margibi County, has committed efforts to work with the Vice President of Liberia, Chief Dr. Jewel Howard-Taylor, to explore means to promote women of Africa, particularly women of Liberia.

She said her experience at the Third Eurasian Women’s Forum in St. Petersburg, Russia, was an opportunity to grasp idea from outside and bring same to Liberia that would help with the development drive of the country.

The Margibi County District #3 lawmaker expressed thanks and appreciation to VP Taylor to have given her and others the opportunity to travel along to the great occasion of women across the world, stating that it is a great way of showing leadership.

The Eurasian Women’s Forum, regularly held since 2015, is one of the largest international platforms uniting female leaders from all continents. Delegates at the Forum discuss the role of women in the modern world and works out new approaches to solving global problems.

In her address, the Liberian Veep laid out challenges and achievements of African women, indicating that despite women in Africa constitute half of the Continent’s population, they continue to be disadvantaged from a wide range of issues, citing unjust social system, to discriminatory practices, stating, both in terms of gender equality and in economic empowerment.

“Distinguished Conference Delegates and Sisters; though we have many impediments in our way; our great achievements have always been; our tenacity to try to put things Right. In times of War; we are the first responders; the scavengers for food; the fearless ones who put ourselves between the guns and our families; and in times of peace, are the mediators and the sustainers of the peace. Unfortunately, once the conflict moves into the phase for development – Women are usually shoved aside and seen as unfit to govern or lead,” she said.

Madam Taylor said though some small progress has been made to address these myriad of issues; but said the fact remains that there are still social and economic challenges that prevent African women from being fully engaged in the transformation and development of Africa, pointing to the glaring reflection on African women’s social, educational and cultural status.

“Women represent half the African population, and are the main pillars of economic development, who continue to be disadvantaged from a wide range of issues – from an unjust social system, to discriminatory practices both in terms of gender equality and in economic empowerment. This is a glaring reflection on their social, educational and cultural status. Though some small progress has been made to address these myriad of issues; the fact remains that there are still social and economic challenges that prevent the African Women from being fully engaged in the transformation and development of Africa,” VP Taylor said.

The Liberian women leader did not just laid out challenges to the forum, but also advanced possible solutions to challenges women are faced with in Africa, stating that “In order for women to become fully engaged in the integrated development of Africa, they must be EMPOWERED. This, according to UNDP, is primarily the self-awareness of potential capabilities and the means and tools to launch and benefit from them.”

“I am of the belief that the self-awareness of our capabilities has dawned on Women of the Continent; but the issue remains the means and tools to benefit therefrom,” Madam Taylor intoned.

The Liberian Vice President, however, indicated the roles African women have continued to play, especially during the COVID-19 pandemic – “I am glad to report that African women have taken up the following ROLES to accelerate African Integrated Development by: Driving the emergency response efforts, Delivering equitable, gender-responsive, and inclusive health systems, Educating girls to lead the transformation, Driving the narrative for full engagement in the African continental free trade area (afctfa), innovating across the tech spectrum, being change agents for positive social change, being positive role models which change the negative social biases, and stepping up, standing out and believing that they can be all they want to be.”

In her closing remarks, Vice President Jewel Howard Taylor quoted former Malawian female President saying, “PERMIT ME TO LEAVE YOU WITH WORDS FROM FORMER MALAWIAN PRESIDENT H. E. JOYCE BANDA” – “The seeds of success in every nation on Earth are best planted in women and children.”