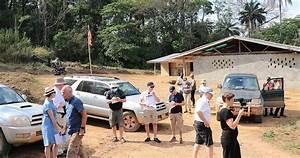 Judges from Finland are digging up witness testimonies in Liberia and are touring the north of the country for a landmark trial against a warlord accused of committing atrocities in Liberia’s civil war.

Gibril Massaquoi is accused of responsibility for war crimes and crimes against humanity between 1999 and 2003 including murder, rape, and using child soldiers.

Massaquoi, 51, a former senior member of the Revolutionary United Front, has lived in Finland since 2008 but was arrested in March after a rights NGO investigated his record during the civil war.

The investigations could set a precedent as few have faced trial for war crimes committed in Liberia.

In a historic move, the Finnish judges are also hearing evidence on Liberian soil — the first time war-crime proceedings have taken place in the country.

“When we come from a totally different country, from a different part of the world, it’s difficult for us to imagine in what kind of circumstances, in what kind of environment the witnesses live,” said Finnish state prosecutor Tom Laitinen.

Around a quarter of a million people were killed between 1989 to 2003 in a conflict marked by brutal violence and rape, often carried out by child soldiers.

Judges visited the northern village of Kamatahun on Thursday, an AFP journalist saw,  and are due to continue on to the nearby village of Yandohun.

Fighters under Massaquoi’s command are accused of committing atrocities in both places.

In Yandohun, people told AFP that they welcomed the trial. Fighters torched the village in the 1990s, they said, and took away residents for forced labour in neighbouring Sierra Leone.