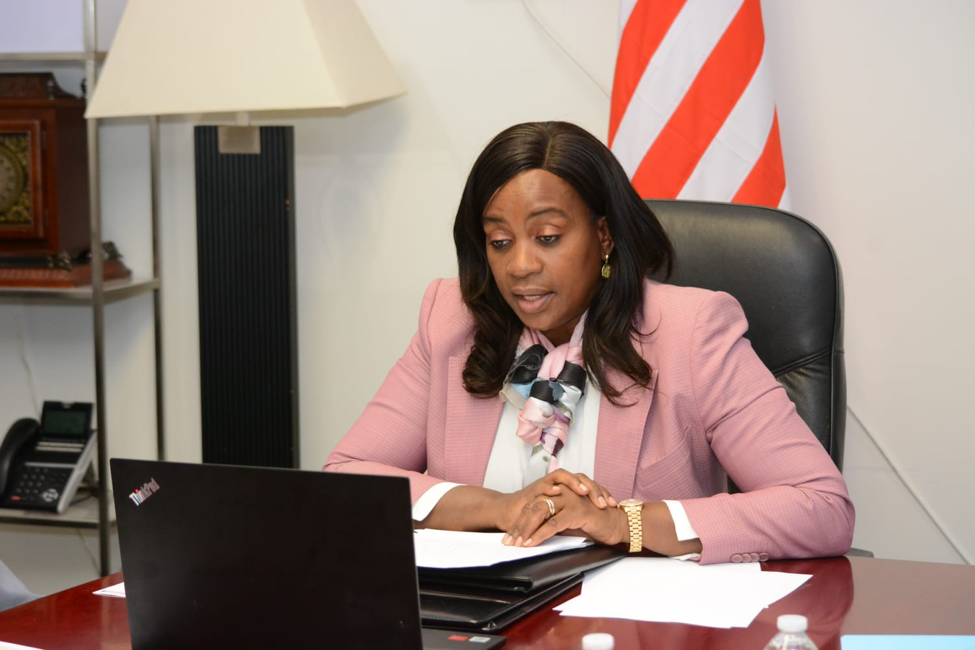 The Ministry of Gender, Children, and Social Protection, in partnership with the office of Liberia’s First Lady, Madam Clar Marie Weah, hosted a side event of the Commission on the Status of Women’s 66th Session (CSW) at the EJS Ministerial Complex in Congo Town. The gathering brought together women from all walks of life, including leaders from Liberia’s rural and traditional women. The event featured dignitaries from the diplomatic corps and was themed “Examining the impact of climate change on women and girls.”

Delivering the keynote address was the First Lady of the Republic of Liberia, Her Excellency Ambassador Clar Marie Weah, who spoke via zoom from UN Headquarters in New York, U.S, called for the inclusion and meaningful participation of women and girls in climate decision and policy making processes.

Madam Weah stressed that progress towards a sustainable future can only be achieved when women and girls, who are amongst the most vulnerable groups affected by climate change, are at the decision-making table and given what they need to adapt to the changing climate.

Recalling her visits across Liberia, the First Lady lamented seeing firsthand the harmful effects of climate change on women and girls and called for concerted efforts to address the situation.

Her Excellency Madam Weah: “As I have traveled across Liberia, I see that many women and girls now have to walk further from their homes to fetch water because the usual nearby creeks and wells are dried up due to the effects of climate change. This also affects their livelihood because they fish in the creeks for fish and set their baskets to catch shrimps. Additionally, their farms and gardens are affected due to the lack of water which give less agricultural yielding and threatens their food security.  We must indeed work together to mitigate these harmful effects of climate change.”

According to a dispatch from the Permanent Mission of Liberia to the United Nations, the First Lady acknowledged the Government of Liberia’s commitment to address the effects of climate change in general, and in particular on women and girls, noting that gender features prominently in the Government’s national development plan—the Pro-Poor Agenda for Prosperity and Development.

Madam Weah also shared initiatives and interventions by her office to help address the devastating impacts of climate change on women and girls. “We have made several interventions specifically seeking to achieve gender equality and the empowerment of all women and girls.  Last year, through the Office of the First Lady of the Republic of Liberia and the Clar Hope Foundation, we encouraged our women – fishmongers to become dynamic by purchasing land and constructing a facility in the New Kru Town area on Bushrod Island for the preservation (smoking and drying) of fish which will further increase supplies on the domestic market and empower our women economically. We also launched a program on menstrual hygiene where we provided sanitary napkins and kits to girls across Liberia, teaching girls about menstrual hygiene and giving them a certain level of empowerment in their lives.” Madam Weah expanded.

The Liberian First Lady made the assertions when she delivered thekeynote address at Liberia’s side event on the margins of the Sixty-sixth Session of the Commission of the Status of Women (CSW66), held through a hybrid format in New York and Liberia, on the theme: “Examining the Impact of Climate Change on Women & Girls in Liberia”.

Opening the event earlier from Liberia, the Minister of Gender, Children and Social Protection, Hon. Williametta E. Saydee Tarr described as significant and timely the spotlight on the impacts of climate change and other disasters and pandemics on women and girls.

Minister Tarr assured that the Government of Liberia will continue to work closely with its partners and counterparts to address the drivers of risk within the context of climate change, including “environmental degradation and disasters that are rooted in structural gender inequalities, such as women’s disproportionate share of unpaid care, domestic and communal work and the associated time constraints that intensify in climate and environment disaster contexts”. The Gender Minister emphasized that Liberia was open to receiving financial and technical support in this regard.

For his part, the Ambassador of Sweden to Liberia, His Excellency Urban Sjostrom, described climate change as a crisis with disproportionate effects on women. He stressed the need to act urgently through concerted efforts, noting that access to education and increased women political representation will help in addressing the situation.

The 66th Session of the Commission on the Status Women opened at the United Nations Headquarters in New York on March 14, 2022, and is being held on the theme: ‘Achieving gender equality and the empowerment of all women and girls in the context of climate change, environmental and disaster risk reduction policies and programmes’. The Session will continue till March 25, 2022.

Speaking early, the Minister of Gender officially opened and welcomed everyone to what she called a historic Side Event of the sixty-sixth session of the Commission on the Status of Women (CSW).

“Before delving into the issues that will form the chemistry of today’s business, kindly permit me to comment briefly on the role and importance of CSW”.

The Commission on the Status of Women is the principal intergovernmental body, which is straightly dedicated to the promotion of gender equality and the empowerment of women. It remains a strong advocate in promoting gender equality at the societal level and leads on monitoring and reviewing progress and challenges in the implementation of the Beijing Declaration and Platform for Action, amongst other gender related issues.

According the Gender Minister, normally the event takes place at the UN Headquarters in New York but due to the emergence of COVID-19, there are restrictions on accessing the premises of the UN Headquarters. Thereby leading member states to host their side events virtually.

“In consideration of the priority theme of the sixty-sixth session of the Commission on the Status of Women (CSW), we want to highlight that our theme “Examining the Impact of Climate Change on Women & Girls in Liberia” is of significance and timeliness. Given the entrenchment of gender inequalities in our society and around the world today, it is important to examine the consequences of intensifying and interlinked crises such as climate change, environmental degradation, biodiversity loss, pollution, disasters and zoonotic diseases or pandemics such as COVID-19, and the concomitant marginalization of the voice, agency, participation and leadership of women, girls and gender diverse people and their movements from policy, governance, and decision-making processes and responses to these global challenges”, Minister said.

Minister Tarr told the audience the side event would also give them an opportunity to ensure that Liberia lives up to her commitment to implement the National Determined Contributions (NDC) by reducing emission by 15%. As more than 90% of our country’s population depends on agriculture, high level of emission will dampen the recent economic gains we are beginning to witness.

“Drawing from our global theme “Achieving gender equality and the empowerment of all women and girls in the context of climate change, environmental and disaster risk reduction policies and programs”, this demonstrates how much our 2.46 million female population holds interest in the global climate change conversation”.