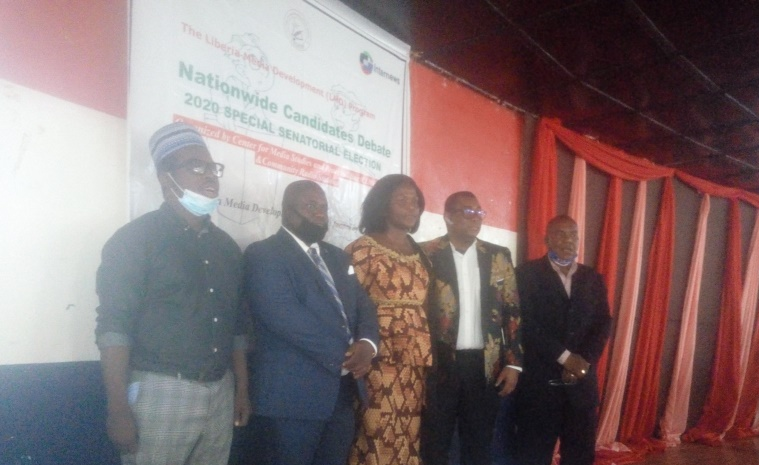 The candidates mentioned above presented their platform to citizens of the county recently at the Nationwide Candidates Debate 2020 Special Senatorial Election organized by the Centre for Media Studies and Peace building (CEMESP) with support from USAID through Internews held at the Buchanan City Fair Ground.

Presenting her platform, candidate Harris promised to elevate the lives of Grand Bassa citizen emphasizing that peace building, women and youth empowerment, agriculture and healthcare are key on her agenda when elected as senator.

According to Harris, when elected as senator of Grand Bassa County, she will bring in direct foreign investments and establish and promote small businesses that will boost the economy of the county which will help to create jobs and empower the citizens.

Harris also said that she will focus on the implementation of policy when it comes to concession agreement as regards to logging companies in the county.

“The laws need to be looked at and the implementation takes effect,” Harris said.

She further told the people that it is the responsibility of the Senate to know what is going on in the counties if a logging company does not comply with the law or violates the law, stressing that the laws are clear on the book.

“Conflict of interest shouldn’t be in partnership with those people who will affect the county. We need to implement the laws,” she asserts.

Candidate Dave Dixon, presenting his platform told the people of Bassa that he did not get in the race to have prestige or salaries but to elevate the people.

“I’m here to be the Senator of Bassa. The people are suffering; women and children are living in poverty. I didn’t come to get salary, I have earned and still earning salaries. I have had the best jobs and have travelled to 52 countries in the world, so I’m not here for prestige, give me the chance to make things better,” Dixon said.

Dixon promised the people that he will make use of the natural resources of the county when elected senator, emphasizing that of his five pillars key is the rule of law that is, he is going to hold people accountable if you are caught in corrupt act as regards to the county’s development fund.

For his part, Representative Vincent Willie, who described his platform as ‘spending time manifesto’ said that transparent accountability, women empowerment, safe drinking water and farm to market road agriculture are key on his agenda when elected senator of the county.

Willie described the debate as wonderful, stressing that this is the place we should come to explain to the people what they have done and what they intend to do.

He said what the people want to hear they have done it as such they have started implementing their platform before being elected on December 8.

At least, the Bassa people got to know, the speculations and non-speculations. The citizens got to know who can ably represent them; they have heard us and seen us and they will listen to us and track our works versus what we have said and what we will do. All I have to say to the citizens is that, you have to be wise,” Willie said.

Willie told the citizens of Bassa to be robust with respect to tackling corruption which is key on his agenda and stop celebrating corruption in Liberia, stressing that if Liberians start to shame and name corrupt people and punish them for their actions, they will not repeat such acts.

He stressed that he has been the number one of Bassa and have ensured that the people have safe drinking water and constructed roads.

In remarks, the Superintendent of Grand Bassa, Janjay Baikpeh, wished all the senatorial candidates well, stating that Bassa remains supreme.

According to him, Bassa Citizens remain peaceful and they are observing the process. He appreciated CEMESP and USAID-Internews for organizing the debates, emphasizing that this is the medium candidates use to present their platforms to the people so that at the end of the day, the citizens can hold them accountable if they fail to do what they have promised.

Amid eviction order:LRRRC to repatriate about 3,000 Liberians from Buduburam Camp...