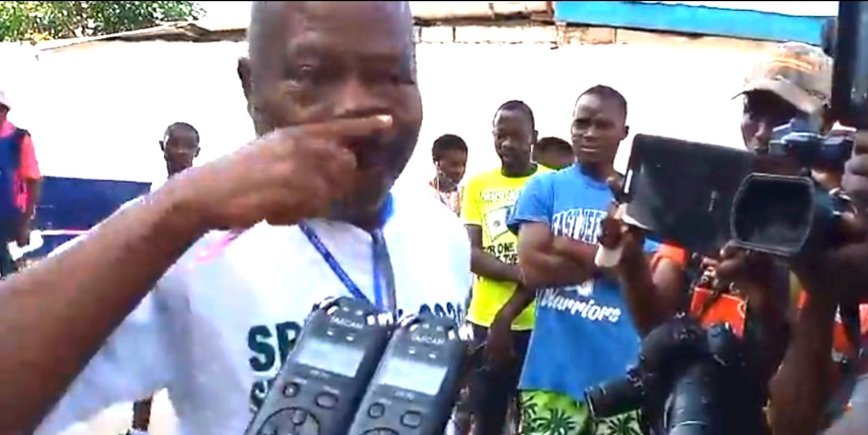 James M. Fromoyan, the Chairman of the Center for Development and Election Management (CEDEM), has issued a warning that if immediate care is not taken, Liberia is firmly on its way to chaos as a result of poor management of the presidential and legislative elections that will take place in 2023. Mr. Fromoyan, who is also a former National Elections Commission (NEC) Chairman, issued the warning through a press statement on July 7, 2022 in Monrovia.

He said his entity has continued to call on the National Elections Commission to manage the electoral process with credibility and transparency in accordance with international best practices in order to earn the respect of the Liberian people and those of the international community, but according to him, the National Elections Commission, under the leadership of Davidetta Browne-Lansanah, has adamantly continued to administer the electoral process of Liberia in a manner devoid of credibility and transparency.

This statement comes in the wake of a recent press conference in which the former ruling Unity Party (UP) rejected the result of the Lofa County By-Election and said it was going to authorize lawyers to find ways to address its concerns. In that press conference, the UP also stated that it lacks confidence in the commissioners and wanted changed.

The CEDEM chair has predicted a repeat of 1985, when the Elections Commission led by Emmett Harmon laid the groundwork for the fratricidal civil war that engulfed Liberia on December 24, 1989.

“It is often said that “when peaceful change becomes impossible, violent change becomes inevitable.” To prevent a repeat of this scenario in Liberia, the Center for Development and Election Management (CEDEM) has continued to call on the National Elections Commission to manage the electoral process with credibility and transparency in accordance with international best practices in order to earn the respect of the Liberian people and those of the international community. Notwithstanding CEDEM’s numerous calls, the National Elections Commission, under the leadership of Davidetta Browne-Lansanah, has adamantly continued to administer the electoral process of Liberia in a manner devoid of credibility and transparency. Hence, it is clear that Liberia is firmly on the road to chaos, as was the case in 1985 when the Emmett Harmon-led Elections Commission laid the foundation for the fratricidal civil conflict that engulfed Liberia on December 24, 1989,” Mr. Fromoyan said.

Mr. Fromoyan contended that the recently concluded Lofa County by-election of June 28, 2022, has once more demonstrated Liberia’s Electoral Management Body’s incapacity and lack of integrity to ensure a safe electoral landing for Liberia come 2023. He said the disgraced conduct of the National Elections Commission in Lofa County is a clear reminder of the NEC’s actions that relegated it to the level of a party to the conflict when the Musa Bility faction of the Liberty Party and the Alternative National Congress (NEC) filed a legal action at the NEC against the withdrawal of the UP and the ALP from the then Collaborating Political Parties (CPP). He emphasized that the NEC, both at the levels of its hearing officer and the Board of Commissioners, firmly ruled at the time that UP and ALP did not have the right to disassociate from the defunct CPP even though Article 17 of the 1986 Constitution of Liberia did guarantee said right.

“As was widely expected by the majority of Liberians, those rulings by the National Elections Commission were dismissed by a unanimous decision of the Honorable Supreme Court of Liberia.”

According to him, the NEC did not learn lessons from the repudiation of its actions by the full bench of the Supreme Court, evidenced by the unprecedented procedure violations that characterized the announcement of the results of the Lofa County By-Election.

“This is troubling, alarming, and disturbing in view of the fact that this is an electoral body that Liberians and the international community expect to lead and manage a very crucial electoral process in 2023.” “It cannot be over-emphasized that the elections of 2023 constitute a major test for the consolidation of Liberia’s democratic experiment and the survival of the country’s prevailing fragile peace,” he said.

Referring to the Lofa County By-election, CEDEM said the current composition of the National Elections Commission has again demonstrated its lack of integrity, fortitude, competence, and capability to conduct peaceful and credible presidential and legislative elections in 2023.

“Indeed, there is no more doubt that the National Elections Commission is an extension of the ruling Congress for Democratic Change. As such, maintaining the Commission in its current form until the 2023 electoral process without the involvement of a counter-part commission comprising of representatives from ECOWAS, the AU, the UN, and the EU would result in chaos in 2023,” he said.

They said there are numerous of these incidents that have occurred across Lofa County. CEDEM alleged that the inconsistency of the NEC in relation to its declaration that those in possession of voter cards but whose names are not on the Final Registration Roll (FRR) would not be permitted to vote. Quoting from a reliable source, he said there were widespread instances across Lofa County where these individuals were permitted to vote.

“This is shameful and reminiscent of the 1920s when Liberia acquired a Guinness Book of Record Recognition for having conducted the world’s most rigged election.” That election, contested mainly by then-President Charles D. B. King and the opposition candidate, T.J.R. Faulkner, had a total voter register of 15,000. Of this number, the Election Commission at the time announced that the opposition candidate had received a total vote of more than 8,000 but disgracefully announced that then-President King had received a total vote of more than 200,000. “In this twenty-first century, while sisterly countries are striving to record progress, we cannot afford to continuously retrogress as a nation to the admiration of our foes,” the statement said.

CEDEM also accused the ruling party of vote buying: “Another negative occurrence that marked the conduct of the Lofa County By-Election is the massive vote-buying by the CDC leadership led by Montserrado County Representative Thomas Fallah, which undermined the credibility of the election.” Many credible reports that emanated from Lofa County during the course of the election quoted Representative Fallah as pledging to pay USD one million to any electoral district that cast the most votes for the CDC-supported candidate. While this information may appear amazing considering the very difficult economic situation prevailing across Liberia, it is important to emphasize that there has been no contrary statement by either Representative Fallah or the CDC as a party”.

He said the National Elections Commission owed an explanation to the Liberian people and members of the international community relating to the reason (s) for the sudden and blatant departure by the NEC from the implementation of the required procedures governing the announcement of election results. The result of an election becomes questionable, non-credible, and falls short of the requirements of international best practice if the Electoral Commission fails to take into consideration the requirements governing the announcement of election results as indicated above. In this regard, the result of the Lofa County by-election is bogus and lacks credibility. The National Elections Commission, through its Chairperson, failed Liberia and, by extension, laid a firm foundation for conflict come 2023 by announcing a bulk or non-disaggregated election result that failed to clearly indicate the electoral districts, the precincts, and polling centers on a case by case or preliminary basis, as is customary with the conduct of past elections. In accordance with international best practice, bulk election results are the product of rigged elections. As such, it is important that the Liberian people and the international community request answers from the NEC in relation to the activities that characterized the conduct of the Lofa County By-Election. Left unchecked, the actions of the National Elections Commission in Lofa County would constitute a rehearsal for the conduct of the Presidential and Legislative Elections in 2023.

The former Chairman of the NEC maintains that the credibility of an election depends on the manner in which the Electoral Management Body (EMB) manages the election. He said as such, Liberians and the international community must emphasize the need for the current composition of the National Elections Commission to be reviewed by the addition of an international counter-part commission that would validate every action of the NEC in relation to planning and operation during the conduct of the 2023 Presidential and Legislative Elections to ensure the protection of the collective interest. Moreover, international IT experts must supervise the operation of the NEC Data Center during the 2023 elections. In addition to these, a biometric enrollment system must be used for the registration and conduct of the 2023 elections.

“Finally, a special election tribunal must be established to handle cases of election contests to prevent the current composition of the NEC that has glaringly demonstrated its partisan allegiance from playing the role of Judge and Jury during the 2023 Elections. If these safety gears are not put in place prior to the conduct of the 2023 Election, CEDEM can conclude without reservation that Liberia is once more firmly on the road to chaos”.

“Corruption is deadly and harmful to economic development”