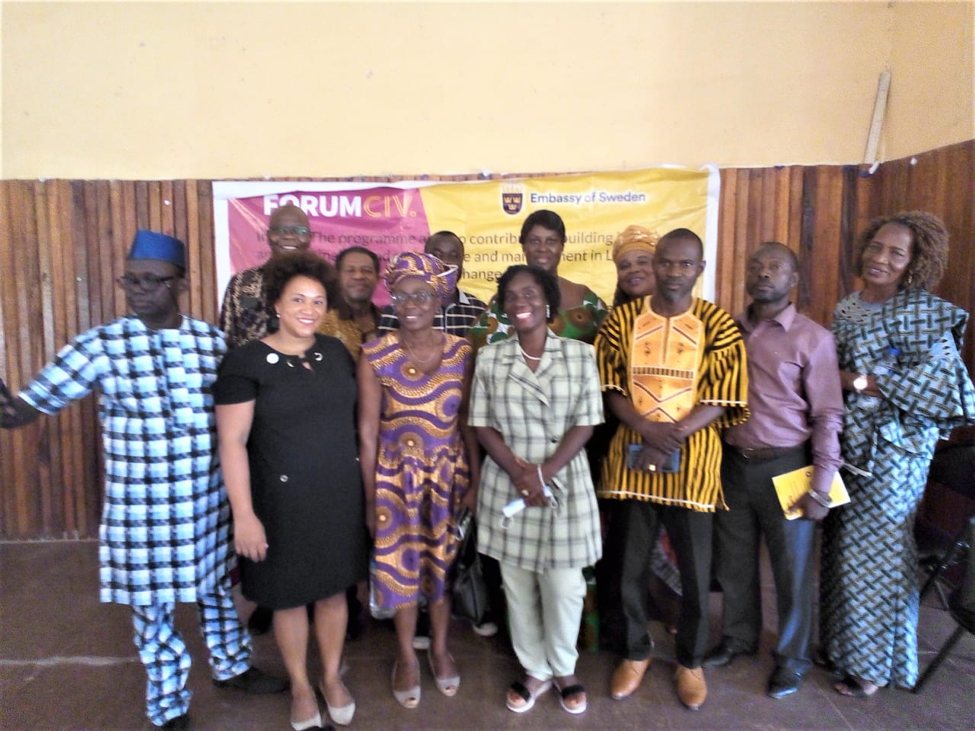 A multimillion dollar community-based empowerment program targeting women and youth in three Liberian counties, including Bong, Bomi, and Grand Gedeh, has been launched by a Swedish International Civil Society Organization in Liberia.

On February 15, 2022, in Gbarnga Bong County, the program “Our Land”: a pathway to sustainable ownership and land use for women and youth was inaugurated.

She urged the partners to build on traditional knowledge and governance in order to secure the long-term viability of collective land tenure, and to ensure that beneficiary institutions include women’s and youth-led organizations. She also highlighted community leadership in the process, implying that assistance systems should be organized to promote community agency and voice. As a result, institutions and judgments become more lasting and legitimate, she said.

Madam Esther Walker, the Bong County Superintendent, expressed her joy that Bong County was a direct beneficiary of the program. She pledged to ForumCiv the country’s complete support.

The 50.7 million Swedish Krona program is a four-year intervention that will build on the lessons learned from the last intervention, the “Sustainable Ownership Program,” according to Country Director Asa David Chon.

The Swedish International Development Cooperation Agency (SIDA) is funding the program, which aims to have women and youth from rural communities in Bomi, Bong, and Grand Gedeh counties effectively participate in land governance and management, as well as gain ownership and control of their land for long-term development and climate change resilience.

Mr. Chon said, ForumCiv would award funding grants to 15 groups, 12 of which will be chosen from the 52 organizations with which ForumCiv had some level of engagement during the last program’s implementation. He also stated that they would select three new partners to round out the 15, and that the remaining 37 partners who do not qualify for funding grants would receive technical assistance and needed resources (computers, motorcycles, solar panels, etc.) as well as assistance in attracting funding from other sources.

“Today, 15th Feb 2022 marks another milestone in our strategy and our commitment to contribute to the development of Civil Society in the rural counties of Liberia. we believe that new programme ‘Our Land’ will go a long way in ensuring that we as an organization will make significant contributions to the realization of ‘just and sustainable world where all people will have the abilities to contribute to change,” Chon said.

Despite the fact that land rights are a starting point for the new program, he stated that they would continue to support issues such as democracy and human rights, gender equality, and the environment and climate change, emphasizing that transparency is a key democratic component that is required in governance and partnerships between rights holders, civil society organizations, duty bearers, and other relevant actors. “In all of its projects, ForumCiv takes a rights-based strategy. This method is based on the belief that change is only sustainable when it is determined, executed, and owned by community members themselves,” he stated emphatically.

He stated that ForumCiv would continue to fund programs that support the organization’s mission by empowering marginalized people to organize to assert their rights. Mr. Chon believes that rights-holders are the ones driving change, which he says necessitates rights-holders banding together to clearly define the issues they want to address.

Director Chon noted that ForumCiv would continue focused in the counties of Bomi, Bong, and Grand Gedeh; but, if resources and needs are recognized, ForumCiv would expand to other parts of Liberia. “We are committed to contributing to a world that works for everyone to eternity”, he said, calling on the stakeholders that were gracing the launch ceremony to work with ForumCiv and its partners that would be selected for the program to ensure that they work together to achieve the objective of the program.

“There is a strong link between the lack of land rights and conflict in Liberia, which is one of the reasons Sweden support both government institutions and civil society organisations working on land rights”, she said.

Civil society, according to Madam Svanelind, has the capacity to contribute to democratic progress and enhanced human rights respect. Civil society also plays a significant role in generating ideas, forming attitudes, and conveying the public’s voice to decision-makers. She believes that this aspect of the Our Land campaign will be crucial.

Speaking about the strategy, the deputy Secretary General of ForumCiv, Ingrid Sievert Uddén, stated that ForumCiv is a politically and religiously non-affiliated development cooperation organization with about 180 member organizations from Swedish civil society and that ForumCiv implements and supports more than a hundred projects in 80 countries each year.

She said ForumCiv’s work is guided by a theory of change, where rights-holders organise in civil society organisations to influence and bring about change.

“We work with a rights-based approach,” which means that the specific issues that are addressed in the projects and programmes that ForumCiv supports can differ greatly. It is the local context and local rights holders that determine what issues or thematic areas should be addressed in their community, “Madam Uddén said.

Madam Uddén  said the Embassy of Sweden in Liberia provided financial support to ForumCiv conduct  a pre-study in Liberia in 2017, which she said,  resulted in the opening of the Liberia Country Office in late fall 2018 and in the implementation of a program called the Sustainable Ownership Program that ended in 2021.

Madam Uddén said the Embassy of Sweden in Liberia provided financial support to ForumCiv to conduct a pre-study in Liberia in 2017, which she said resulted in the opening of the Liberia Country Office in late fall 2018 and the implementation of a program called the Sustainable Ownership Program that ended in 2021.

She said the need to support a new independent civil society was and is the reason for ForumCiv to come and work in Liberia. “We have been working on grant making and capacity development precisely since 2018 so that local CSOs can identify their main problem(s), determine the best solution(s), and implement their programs,” she continues. “Internal democracy, legitimacy, and organizational capacity are key factors for local civil society to be change makers towards democracy and human rights.”

She stated that ForumCiv will collaborate with a diverse group of partners who represent various rights-holders and issues, with a particular focus on groups who are marginalized as a result of social discrimination, such as rural women, young women and men, boys and girls, and rights-holders with disabilities.

According to Udden, the program’s main thematic focus is on women’s and youth’s land rights. She said it would cover issues such as gender equality, inheritance, and so on.

“Themes of the environment and resilience to climate change, including natural resource management and conflict sensitivity, will be integrated and mainstreamed as development perspectives and will be enhanced as land rights for women and youth are enhanced through greater respect and protection of these rights”, the narrator said.